When life first arose in the universe is a question to which we have no answer. A key problem here is that without knowing how rare — or common — life’s emergence is, we can’t draw conclusions about where (or when) to find it. One thing that is accessible to us, though, is information about when stars began the process of producing the elements beyond hydrogen and helium that are constituents of our own living systems. And on that score, we have interesting news from an international team of scientists about extremely old galaxies.

Led by Takuya Hashimoto and Akio Inoue (Osaka Sangyo University), the researchers have gone to work on a galaxy known as MACS1149-JD1, using data acquired from the Atacama Large Millimetre/Submillimetre Array (ALMA) and the European Southern Observatory’s Very Large Telescope (VLT). The team’s paper in Nature confirms that the galaxy is some 13.28 billion light years away. Thus we see it as it appeared when the universe was about 500 million years old. Another galaxy, GN-z11, has been measured at 13.4 billion light years using data from the Hubble Space Telescope.

But the Hubble data offer a less precise measurement than Hashimoto and Inoue found, because the distance to MACS1149-JD1 is based on two independent emission lines from atoms of hydrogen and oxygen, and therein lies a tale. This is the most distant known source of oxygen ever detected. It implies that this galaxy contains stars that formed using elements produced in a still earlier generation of stars whose death produced heavier elements. Here’s what second author Nicolas Laporte (University College London) has to say on this:

“This is an exciting discovery as this galaxy is seen at a time when the Universe was only 500 million years old and yet it already has a population of mature stars. We are therefore able to use this galaxy to probe into an earlier, completely uncharted, period of cosmic history.” 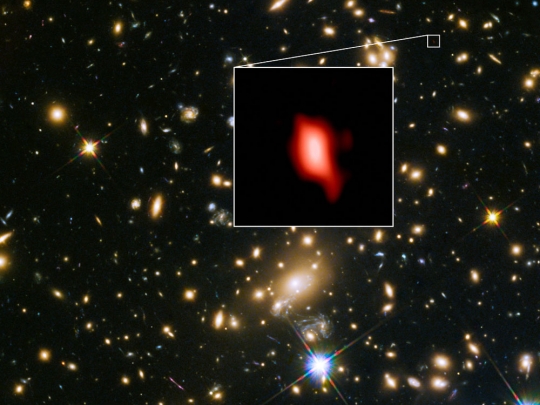 But let’s pause for a moment to remind ourselves of how tricky it is to calculate distances for objects at the edge of the visible universe. Here I’m quoting from the National Astronomical Observatory of Japan’s website on the matter:

…the distances to astronomical object beyond about a couple billion light-years are estimated using redshift — a change in the wavelength of light from the object. The relation between the redshift and the distance depends on the history of the Universe: how fast (or slow) the Universe has been expanding. This is determined by models (based on physics) and certain characteristic parameters. These parameters are still being determined, so their estimated values change from year to year. Also, there are different ways to define distances (co-moving distances, luminosity distances, …), which give different values. Because of the complexity, sometimes different astronomers find different distances for the same object.

With that in mind, we can proceed to Laporte, who detected hydrogen emissions from MACS1149-JD1 using the Very Large Telescope, producing an independent confirmation of the distance Hashimoto and Inoue had deduced from their ALMA data (both using, in NAOJ’s words, ‘cosmological parameters given in the most recent published results by the major collaborations’). In the ALMA work, the signal of ionized oxygen had been stretched from the infrared down to microwave wavelengths by the continuing expansion of spacetime.

Both Laporte and the Hashimoto/Inoue team have run up a history of detecting the most distant known sources, with Laporte responsible for an earlier detection of oxygen at 13.2 billion light years. What we wind up with the new paper is evidence for star formation at an even earlier period, some 250 million years after the Big Bang, meaning that galaxies existed at times earlier than we can currently detect them. Co-author Richard Ellis (University College London) notes the implications for life:

“Determining when cosmic dawn occurred is akin to the `Holy Grail’ of cosmology and galaxy formation. With MACS1149-JD1, we have managed to probe history beyond the limits of when we can actually detect galaxies with current facilities. There is renewed optimism we are getting closer and closer to witnessing directly the birth of starlight. Since we are all made of processed stellar material, this is really finding our own origins.”

Are these likewise the origins of other living things in the cosmos? My assumption is that the answer is yes, but without confirmatory data, that thought can be no more than a speculation.