Galactic Habitability and Sgr A*

Yesterday I looked at evidence for oxygen in a galaxy so distant that we are seeing it as it was a mere 500 million years after the Big Bang. It’s an intriguing find, because that means there was an even earlier generation of stars that lived and died, seeding the cosmos with elements heavier than hydrogen and helium. It’s hard to imagine the vast tracts of time since populated with stars and, inevitably, planets without speculating on where and when life developed.

But as we continue to speculate, we should also look at the factors that could shape emerging life in galaxies like our own. Tying in neatly with yesterday’s post comes a paper from Amedeo Balbi (Università degli Studi di Roma “Tor Vergata”), working with colleague Francesco Tombesi. The authors are interested in questions of habitability not in terms of habitable zones in stellar systems but rather habitable zones in entire galaxies. For we know that at the center of our Milky Way lurks the supermassive black hole Sgr A*, whose effects must be considered.

Such black holes are known to produce vast amounts of ionizing radiation in the highly visible form of quasars or active galactic nuclei (AGN). The atmospheric loss and biological damage inflicted on a rocky planet as it is exposed to intense X-ray and extreme ultraviolet radiation can be extreme, and such conditions would have marked our own galaxy’s AGN phase.

The concern here is to examine how ionizing radiation can impact habitability by exposing planetary surfaces to high-energy fluxes, while also degrading planetary atmospheres. We’ve looked at these issues now and again on this site, with particular regard to red dwarf stars, the most common class of star in the galaxy but also a type prone to flare activity particularly when young. We now consider whether there are regions in our galaxy that would be less likely to be habitable because of the effects of Sgr A*, which was not always as quiet as it is now. 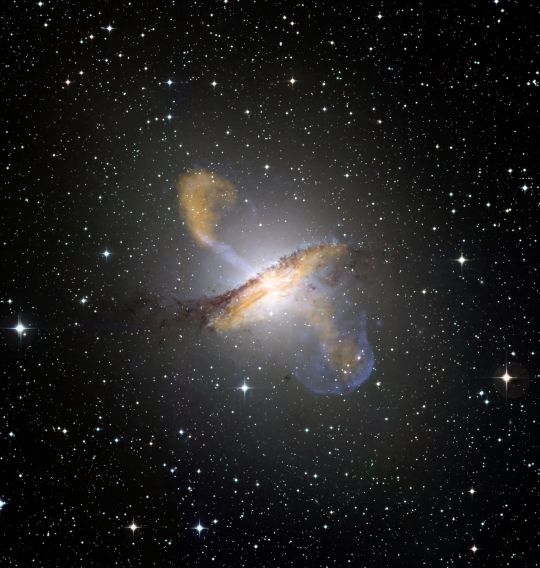 AGNs represent a class of galaxies that appear in a wide range of shapes and spectral features. Some of that spectral variation may, according to one theory, involve our viewing angle and the obscuring effects of dust. The peak of Sgr A*’s active phase is thought to have occurred less than 8 billion years ago and to have lasted between 107 and 109 years. The paper examines how this activity would affect the habitability of the Milky Way. 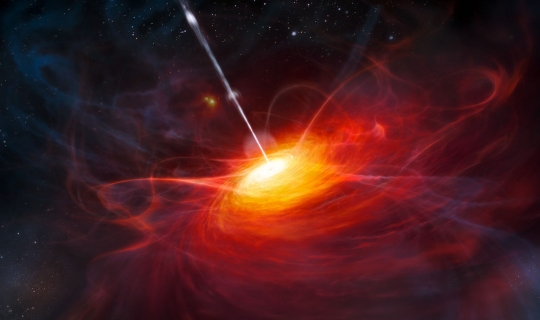 The researchers compared the XUV flux at various distances from galactic center to the dosage that would prove lethal for organisms on Earth, producing ‘critical fluxes’ for complex life as well as for prokaryotes (some radiation-resistant terrestrial prokaryotes can survive high radiation doses). How far from Sgr A* would a planet have to be to be exposed to a critical flux?

The issue is complicated by the possible response of local organisms, which might evolve to cope with increased radiation under varying environmental conditions, and it is also true that radiation doses lower than lethality could spur biological mutations. But given what they assume to be plausible values for a lethal absorbed dose of ionizing radiation, the authors believe that complex life would have been in jeopardy during Sgr A*’s peak active phase at distances as large as 10 kpc [32,600 light years] from galactic center. By comparison, the Sun lies about 8 kpc from the center of the Milky Way, having formed well after the Sgr A* peak.

This may not have prevented the appearance of life per se, since prokaryotes could have survived to higher fluxes. However, we point out that the biological effect of the ionizing radiation from Sgr A* would have been in addition to that of any other source of ionizing radiation, for example from the host star, and would add to the loss of a large fraction of the atmosphere. Even if some organisms might have survived by developing radiation-resistance or finding protected niches, the global effect on the biosphere would have been significant.

Let me circle back around to the question of atmosphere loss, also critical in assessing life’s chances in the era of Sgr A* peak activity. Assuming that the torus of the AGN would have been co-aligned with the galactic plane, the authors produce the chart below, showing the total amount of atmospheric mass lost at the end of the AGN phase of Sgr A* by a planet with the same density as Earth, as a function of the distance from the galactic center. 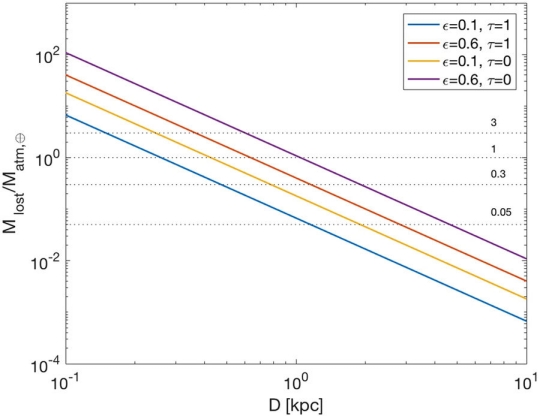 Image: This is Figure 1 from the paper. Caption: The total mass lost at the end of the AGN phase of Sgr A* by a terrestrial planet at distance D from the galactic center, in units of the atmosphere mass of present day Earth. Each curve was computed assuming a value for the efficiency of hydrodynamic escape of either ε = 0.1 or ε = 0.6. An optical depth τ = 1 corresponds to locations close to the galactic plane (maximum attenuation by the AGN torus) while τ = 0 corresponds to high galactic latitudes (no attenuation). Credit: Amedeo and Tombesi.

The conclusion is stark: Rocky planets in the galactic bulge would have been exposed to enough XUV radiation during peak Sgr A* activity to lose a significant fraction of their atmosphere. The mass loss for distances from the galactic plane of 0.5 kpc or less could be comparable to the atmosphere of Earth today. It would take significant volcanism and outgassing to regenerate an atmosphere sufficiently to repair such a loss.

…our results imply that the inner region of the Milky Way might have remained uninhabitable until the end of the AGN phase of its central black hole, and possibly thereafter. This has important consequences in assessing the likelihood of ancient life in the Galaxy, and should be taken into account in future studies of the Galactic habitable zone. It also suggests further investigations on the relation between supermassive black holes in galactic cores and planetary habitability.

The paper is Balbi and Tombesi, “The habitability of the Milky Way during the active phase of its central supermassive black hole,” Scientific Reports 7, article #: 16626 (2017). Full text.

Next post: Dawn at Ceres: Imagery from a Changing Orbit