How Old Are Globular Clusters?

Some 150 globular clusters are associated with the Milky Way, great collections of stars inhabiting the galactic halo. Their stars have long been assumed to be ancient, making the question of life there intriguing: If life caught hold in these tightly packed clusters early in the universe’s evolution, could ancient civilizations have formed that might persist even today? I know of only one planet that has yet been found in a globular cluster, but we’re obviously early in the game, and planets have been discovered in open clusters, which are much less densely packed.

Just how little we know about globular clusters, though, is made apparent by the work of Elizabeth Stanway (University of Warwick), whose new paper argues that such clusters could be billions of years younger than we have thought. Working with JJ Eldridge (University of Auckland), Stanway invokes a model called Binary Population and Spectral Synthesis (BPASS). In play here is the evolution of binary stars within globular clusters, a line of research that has been put to work in prior studies of young stellar populations in the Milky Way and elsewhere. 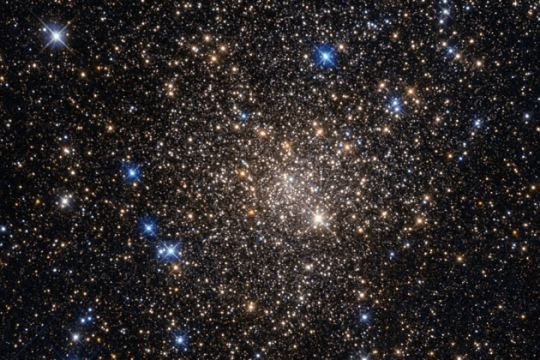 Image: The globular cluster Terzan 1. Clusters like these have been thought to contain some of the oldest known stars. New research puts their age into question. Credit: Judy Schmidt/ESA/NASA.

A significant problem in observing globular clusters is described in the paper. Having discussed using the spatially resolved light of individual stars to determine stellar properties, the authors note:

However, in the majority of old stellar populations, such detailed investigation of resolved stellar properties is impossible due to a lack of depth or angular resolution, and the integrated light of the unresolved stars must instead be used to constrain the properties of the population as a whole. In this scenario observable characteristics of the source spectral energy distribution (SED), including photometric colours and spectroscopic emission lines or indices, are compared to those determined for models of known age and composition.

And here’s the crux, which is why the age of such significant galactic features as these remains in doubt:

Either a best fitting template or a relation calibrated on such templates is then used to characterise the population. As a result, such analyses are strongly dependent on the properties of the template stellar population models.

Out of this understanding has sprung a new generation of models for the study of galactic evolution. But as the authors point out, binary interactions can have marked effects on a star’s development, and current research indicates that multiple star systems are ubiquitous in globular clusters, making single star models problematic when conclusions are being drawn from the integrated light of the entire cluster. And it turns out that the model populations that best fit observations are substantially younger than those derived from older spectral models.

Thus the utility of BPASS, which the authors have upgraded from a version described in an earlier paper. The BPASS upgrade is targeted at refining age estimates for older populations of stars. The researchers examine the elements in the spectra of binary stars, looking at systems where the larger star expands into a giant while the smaller star strips away its atmosphere. In this model, both stars are assumed to have formed at the same time as the globular cluster.

…incorporating binary stellar evolution pathways, together with the most up-to-date stellar evolution and atmosphere models for single stars, into stellar population synthesis models can make a significant difference in the interpretation of their integrated light properties. The lifetimes of stars in different mass ranges can be modified, by mass transfer and mixing, as can their temperatures and gravities. Mass transfer onto a secondary can produce more massive, and therefore brighter, stars at late ages, even if their stellar atmospheres are typical of cool red giants. A population can also incorporate stellar types simply not found in the absence of binary evolution. 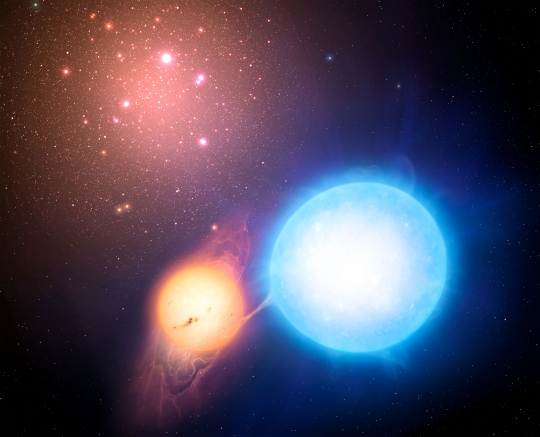 Given the dependence of the age estimates of older star populations on evolutionary models, it’s helpful to see that the BPASS work can reproduce observed values in globular clusters and galaxies. And as the model is continuing to be refined, it produces this result:

At its most basic level, this means that we are able to reproduce the photometry of mature, quiescent galaxies and clusters at younger ages than previous model sets (i.e. ∼ 5 − 8 Gyr, rather than 10-14 Gyr).

Stellar interactions, then, may tell the tale, perhaps adjusting our estimates of cluster age by billions of years. Still ancient, these vast ‘cities of stars’ pose huge questions — how stable are planetary orbits, for example, given the interactions between such tightly packed stars? But the vision of places like Lagash, the planet in Isaac Asimov’s “Nightfall” (called Kalgash in the later novel), its skies always ablaze with stars, keeps the science fiction fan in me speculating. What would it be like to be on a planet deep within something as splendid as the image below? 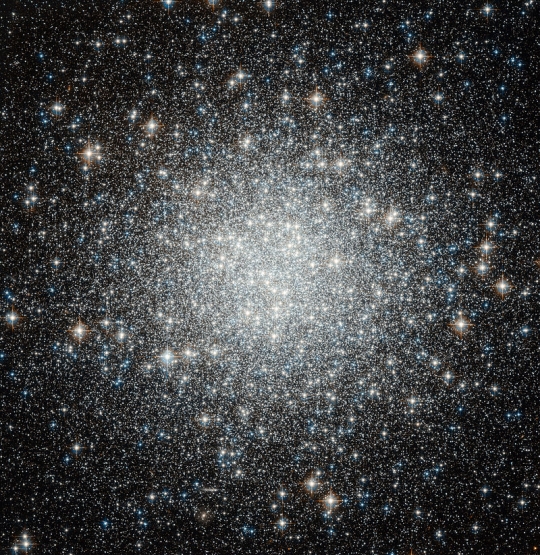 Image: Thousands and thousands of brilliant stars make up this globular cluster, Messier 53, captured with crystal clarity in this image from the NASA/ESA Hubble Space Telescope. Bound tightly by gravity, the cluster is roughly spherical and becomes denser towards its heart. These enormous sparkling spheres are by no means rare, and over 150 exist in the Milky Way alone, including Messier 53. It lies on the outer edges of the galaxy, where many other globular clusters are found, almost equally distant from both the centre of our galaxy and the Sun. Although they are relatively common, the famous astronomer William Herschel, not at all known for his poetic nature, once described a globular cluster as “one of the most beautiful objects I remember to have seen in the heavens.” This picture was put together from visible and infrared exposures taken with the Wide Field Channel of Hubble’s Advanced Camera for Surveys.

Our understanding of globular clusters is, of course, a work in progress. Says Stanway:.

“It’s important to note that there is still a lot of work to do – in particular looking at those very nearby systems where we can resolve individual stars rather than just considering the integrated light of a cluster – but this is an interesting and intriguing result. If true, it changes our picture of the early stages of galaxy evolution and where the stars that have ended up in today’s massive galaxies, such as the Milky Way, may have formed. We aim to follow up this research in future, exploring both improvements in modelling and the observable predictions which arise from them.”

The paper is Stanway & Eldridge, “Reevaluating Old Stellar Populations,” in press at Monthly Notices of the Royal Astronomical Society (preprint).