Marc Millis spent the summer of 2017 at the Technische Universität Dresden, where he taught a class called Introduction to Interstellar Flight and Propulsion Physics, a course he would also teach at Purdue University last November. The former head of NASA’s Breakthrough Propulsion Physics project and founding architect of the Tau Zero Foundation, Marc participated in the SpaceDrive project run by Martin Tajmar in Dresden, an effort that has been in the news with its laboratory testing of two controversial propulsion concepts: The Mach Effect Thruster and the EmDrive. Marc’s review comments on modeling for the former were almost as long as Tajmar’s draft paper. Described below, the SpaceDrive project is a wider effort that includes more than these two areas — neither the EmD or MET thruster had reached active test phase during the summer he was there — but the ongoing work on both occupies Millis in the essay that follows. 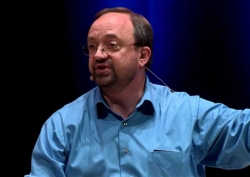 You may have noticed a renewed burst of articles about the EmDrive. What prompted this round of coverage was an interim report, part of the progress on Martin Tajmar’s ‘SpaceDrive’ project to carefully test such claims. Tajmar’s conference paper [citation below] is one of the early steps to check for false-positives. I expect more papers to follow, each progressing to other possibilities. It might take a year or so more before irrefutable results are in. Until then, treat the press stories about certain conclusions as highly suspect.

On Tajmar’s work, this quote from his conference paper:

Within the SpaceDrive project [6], we are currently assessing the two most prominent thruster candidates that promise propellantless propulsion much better than photon rockets: The so-called EMDrive and the Mach-Effect thruster. In addition, we are performing complementary experiments that can provide additional insights into the thrusters under investigation or open up new concepts. In order to properly test the thruster candidates, we are constantly improving our thrust balance facility as well as checking for thruster-environment interactions that can lead to false thrust measurements.

The Mach Effect Thruster is a different approach to the goal of a non-rocket spacedrive, but one that is rooted in unsolved questions in physics where there is a chance for new discoveries. Its theory led to a testable prediction that then evolved into an idea for a propulsive effect.

The unsolved physics question is: “What is the origin of inertial frames?” One attempt to answer that is called “Mach’s Principle” (term coined by Einstein to describe Ernst Mach’s perspective), which is roughly: “inertia here, because of matter out there.” The idea is that the phenomenon of inertia is an interaction between that mass and all the surrounding mass in the universe (presumed gravitational in nature). Jim Woodward picked up on a version of this from Dennis Sciama, and noticed that the inertial mass of an object can fluctuate if its energy fluctuates (think energy in a capacitor). That led to an idea for a propulsive effect by varying the distance between two fluctuating inertias. Unlike the EmDrive, this idea has been in the peer-reviewed literature from the beginning, with some of the more relevant papers being:

Woodward, J (1994), “Method for Transiently Altering the Mass of an Object to Facilitate Their Transport or Change their Stationary Apparent Weights,” US Patent # 5,280,864.

Martin Tajmar’s laboratory results can be summarized this way: False positive thrusts were observed under conditions where there should be no thrusting or only minor thrusting. More systematic checks have to be made prior to testing the thrusters at their nominal and maximum operating parameters. The mismatch was more pronounced for the EmDrive than for the Mach Effect Thruster. In both cases it is premature to reach definitive conclusions since this is a work in progress. And if any thrusters do pass all those tests, then more tests will commence to figure out how the thrusters operate (varying conditions to see which affect the thrust levels).

In the case of the EmDrive, only 2 W of the more normal 60 W of power was made available to the thruster. Even at that low power level, thrusts of about 4 µN were observed, which is more than the 2.6 µN expected from the claims from Sonny White’s tests. The more revealing observations were that thrusts were observed when the EmDrive was not supposed to be thrusting. When the EmDrive was pointed to a non-thrusting direction, thrusts were still observed. When the power to the thruster was sent to an attenuator to further reduce the power to the thruster by a factor of 10,000, thrusting at the prior level was still observed.

These observations do not bode well for the EmDrive’s claims of real thrust, but it is too early to firmly dismiss the possibilities. One suspect for the false positive is the interaction with the current to the device and the Earth’s magnetic field, where a current of 2-amps in a few cm of wires can produce a thrust in the µN range. Further tests are planned after adding more magnetic shielding and operating over different power levels.

In the case of the Mach Effect Thruster – which by the way, none of the press articles mentioned – the findings were less pessimistic. Again there were thrusts measured in excess of what was expected for the low power levels (0.6 versus 0.02 µN). Unlike the EmDrive’s mismatch, no thrust was observed when the Mach Effect Thruster was pointed to a non thrusting direction. There was, however, a case where the thrust direction did not change when the thruster direction was flipped. The suspected causes to be further investigated include both magnetic and thermal (expansion) effects.

A word of advice: if you plan to look at Tajmar’s paper. When I tried my usual “rush read” through the paper by reading the abstract and scanning the figures, I misled myself. Read the full text that accompanies the figures to know what you are really looking at. It’s a short article.

Regarding some representative press articles, here is a quick assessment

This one goes into more detail than the other articles about what was actually done and not done and does link to its information sources. It does not mention the Mach Effect Thruster.

This one mentions the doubt, but leaves the door open just a bit. Although it does not mention the Mach Effect Thruster also under test, it does at least give a link to the core article and mentions where it came from.

(3) Ethan Siegel, The EmDrive, NASA’s ‘Impossible’ Space Engine, Really Is Impossible: Many tests have reported an ‘anomalous thrust’ where there should be none. A researcher has finally shown where everyone else has messed up

This article talks more about the old claims and expectations than what was really in the new paper. It does not mention the Mach Effect Thruster.

More short-hand opinion, and again, no mention of the Mach Effect Thruster.

The takeaway: Science does not proceed by proclamation. Despite what headlines may say, laboratory work is a matter of refining techniques and bringing precision to bear on prior claims. At the moment, evaluation of the EmDrive and Mach Effect thruster continues, with no guarantee that either of these effects may prove genuine, but let’s let the process play out.