Cosmic Engineering and the Movement of Stars

Avi Loeb’s new foray into the remote future had me thinking of the Soviet physicist Leonid Shkadov, whose 1987 paper “Possibility of Controlling Solar System Motion in the Galaxy” (citation below) discussed how an advanced civilization could get the Sun onto a new trajectory within the galaxy. Why would we want to do this? Shkadov could imagine reasons of planetary defense, a star being moved out of the way of a close encounter with another star, perhaps.

All of this may remind science fiction readers of Robert Metzger’s novel CUSP (Ace, 2005), which sees the Sun driven by a massive propulsive jet. A more recent referent is Gregory Benford and Larry Niven’s novels Bowl of Heaven (Tor, 2012) and ShipStar (2014), in which a star is partially enclosed by a Dyson sphere and used to explore the galaxy. In 1973, Stanley Schmidt would imagine Earth itself being moved to M31 as a way of avoiding an explosion in the core of the Milky Way that threatens all life (Sins of the Fathers, first published as a serial in Analog).

Loeb’s paper mentions technologies for moving stars because several recent proposals involve this kind of ‘cosmic engineering’ to change civilizational outcomes. The accelerated expansion of the universe will, after the universe has aged by a factor of 10, make all stars outside the Local Group of galaxies disappear as they recede. The process continues with continued acceleration. Wait long enough and we fall prey to cosmic winter, and as Loeb writes:

Following the lesson from Aesop’s fable “The Ants and the Grasshopper,” it would be prudent to collect as much fuel as possible before it is too late, for the purpose of keeping us warm in the frigid cosmic winter that awaits us. In addition, it would be beneficial for us to reside in the company of as many alien civilizations as possible with whom we could share technology, for the same reason that animals feel empowered by congregating in large herds.

There are places where we might do this, says Loeb, and I’ll talk about his ideas on them tomorrow. For today, note that in response to his previous papers on the oncoming ‘cosmic isolation,’ Freeman Dyson proposed to Loeb his own project that would move stars, bringing large-scale formations of stars down to a more manageable volume so that they will be bound by their own gravity. Closely spaced, the stellar collection avoids being dissipated in the accelerated expansion of the cosmos. And it turns out that Dan Hooper (University of Chicago) has also been pondering induced stellar motion, using the energy output of stars to cluster large numbers of them into an astronomically tight radius so that their energies can be harvested. 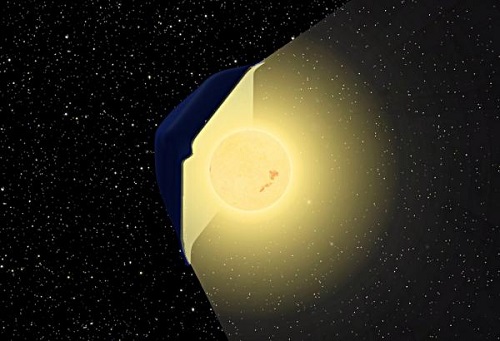 Image: A Shkadov thruster as conceived by the artist Steve Bowers.

Like Dyson and Loeb, Hooper has his eye on the acceleration of cosmic expansion and its consequences. So what kind of ‘stellar engines’ can we envision that could move objects as large as stars? Leonid Shkadov suggested using a star’s radiation pressure. The Shkadov thruster extracts energy from the star by using a vast mirror to take advantage of photon momentum. Let me turn back to an earlier post to reprint a diagram that Duncan Forgan uses in describing a Shkadov thruster. Forgan (University of Edinburgh) points out the difference between these thrusters and Dyson spheres, the latter being spherical and shaped so as to balance gravitational forces on the sphere by way of collecting a maximum amount of stellar energy. But here is the Shkadov thruster as diagrammed by Forgan: 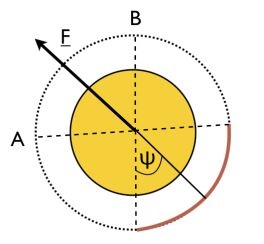 Image: This is Figure 1 from Duncan Forgan’s paper “On the Possibility of Detecting Class A Stellar Engines Using Exoplanet Transit Curves.” Caption: Diagram of a Class A Stellar Engine, or Shkadov thruster. The star is viewed from the pole – the thruster is a spherical arc mirror (solid line), spanning a sector of total angular extent 2ψ. This produces an imbalance in the radiation pressure force produced by the star, resulting in a net thrust in the direction of the arrow. Credit: Duncan Forgan.

Thus the whole idea of the Shkadov thruster is not balance but imbalance. And Forgan goes on to say this about the idea:

In reality, the reﬂected radiation will alter the thermal equilibrium of the star, raising its temperature and producing the above dependence on semi-angle. Increasing ψ increases the thrust, as expected, with the maximum thrust being generated at ψ = π radians. However, if the thruster is part of a multi-component megastructure that includes concentric Dyson spheres forming a thermal engine, having a large ψ can result in the concentric spheres possessing poorer thermal efﬁciency.

Efficient or not, Shkadov thrusters interest Forgan as a possible SETI detection (Hooper also notes the possibility). Like Dyson spheres, their sheer scale and unusual features could make them visible in a lightcurve, perhaps with the aid of radial velocity follow-ups. Arguing against the idea, though, is the fact that the Shkadov thruster is probably not the technology our hypothetical future civilization would use to move its star (or stars).

I found this out when I wrote Avi Loeb in reaction to his new paper and mentioned the Shkadov idea. Loeb found Dan Hooper’s ideas (in “Life Versus Dark Energy: How An Advanced Civilization Could Resist the Accelerating Expansion of the Universe,” citation below) to be a better solution to the problem. Here is what Loeb told me in our email exchange yesterday:

The use of the momentum associated with the radiation emitted by the star for its propulsion, as envisioned in Shkadov’s thruster, is much less efficient than using the energy associated with same radiation. The radiation momentum equals its energy divided by the speed of light, c. However, the momentum gained by converting this energy to the kinetic energy of a massive object moving at a speed v is larger by a factor of 2(c/v). This is a huge factor of which Dan Hooper is taking advantage to argue that Sun-like stars can reach a percent of the speed light, 0.01c, in a billion years. If he would have used the momentum of the light emitted by the star as in Shkadov’s thruster, then the attainable speed would have been a hundred times smaller, only of order 30 km/s (similar to the speed of chemical rockets), and the journey being contemplated would have not been feasible. During the age of the Universe (10 billion years) one would only be able to traverse a million light years and not leave the Local Group of galaxies. This is not sufficient for gaining more fuel than available within the Local Group of galaxies.

Thus the problem of the Shkadov thruster: By using the momentum of stellar photons, Shkadov loses efficiency. Loeb adds: “One way to improve the efficiency of Shkadov’s thruster (by employing the energy and not the momentum of the star’s radiation) is to harvest the energy from the star through a Dyson sphere and then use it to ablate its surface on one side, generating a rocket effect.” This seems to be what Dan Hooper has in mind in his paper. The civilization in question would harvest the energy of stars through Dyson spheres that, quoting Hooper, “…use the collected energy to propel the captured stars, providing new and potentially distinctive signatures of an advanced civilization in this stage of expansion and stellar collection.”

Hooper has a SETI prospect in mind, while also thinking about collecting sources of energy, maximizing its amount in the form of starlight by a factor of several thousand. It is this prospect that interests Loeb. His paper makes the case that we already have massive reservoirs of fuel in the visible universe in the form of galactic clusters, each containing the equivalent of 1000 Milky Ways. Perhaps, then, we need no star-moving and collection project a la Hooper or Dyson, but rather need to think about reaching a galactic cluster for our fuel. Given the magnitude of that challenge, whether or not we take our home star along is inconsequential.

The speculative buzz I get from this is science fictional indeed. The nearest cluster is Virgo, whose center is some 50 million light years away, with the Coma cluster six times farther still. Thinking in terms of a civilization that could cross such gulfs takes us into Olaf Stapledon territory, a region of spacetime with which I share Loeb’s obvious fascination. I’m running out of time today, but want to look deeper into this with the help of Loeb’s paper tomorrow. I’ll also have more thoughts on ‘stellar engines’ and their origins.

Avi Loeb’s new paper is “Securing Fuel for Our Frigid Cosmic Future” (preprint). Leonid Shkadov’s paper on the Shkadov thruster is “Possibility of controlling solar system motion in the galaxy,” 38th Congress of IAF,” October 10-17, 1987, Brighton, UK, paper IAA-87-613. The Forgan paper is “On the Possibility of Detecting Class A Stellar Engines Using Exoplanet Transit Curves,” accepted at the Journal of the British Interplanetary Society (preprint). The Hooper paper is “Life Versus Dark Energy: How An Advanced Civilization Could Resist the Accelerating Expansion of the Universe” (2018). Preprint.