We learned late last week that the near-Earth asteroid 2017 YE5, discovered just last December, is what is described as an ‘equal mass’ binary. This would make it the fourth near-Earth asteroid binary ever detected in which the two objects are nearly identical in size, both about 900 meters. The binary’s closest approach to Earth was on June 21, 2017, when it came to within 6 million kilometers, some 16 times the distance between the Earth and the Moon. It won’t be that close again for at least another 170 years. 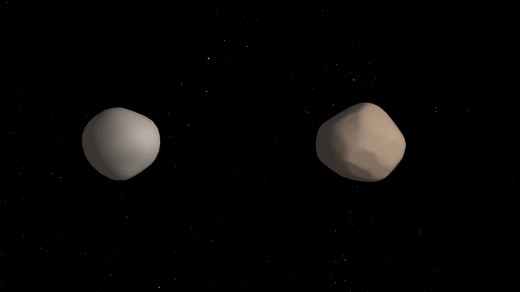 Image: Artist’s concept of what binary asteroid 2017 YE5 might look like. The two objects show striking differences in radar reflectivity, which could indicate that they have different surface properties. Credit: NASA/JPL-Caltech.

What you have above is an artist’s impression of how 2017 YE5 appears, but have a look at the radar imagery below. This comes from NASA’s Goldstone Solar System Radar (GSSR, observations conducted on June 23, 2018), and shows the presence of two lobes. We don’t yet see a binary, but these radar images were enough for Goldstone scientists to alert astronomers at Arecibo Observatory, who had already inserted 2017 YE5 into their observing list.

Working with researchers at the Green Bank Observatory in West Virginia, the Arecibo scientists linked the two observatories in a bi-static radar configuration, meaning that Arecibo transmits the radar signal while Green Bank receives the return signal. It was the combination of data from the two observatories that allowed 2017 YE5 to be confirmed as two separated objects.

Image: Bi-static radar images of the binary asteroid 2017 YE5 from the Arecibo Observatory and the Green Bank Observatory on June 25. The observations show that the asteroid consists of two separate objects in orbit around each other. Credit: Arecibo/GBO/NSF/NASA/JPL-Caltech.

A surprising number of near-Earth asteroids may be binaries, according to this JPL news release, which tells us that among near-Earth asteroids larger than 200 meters in size, about 15 percent are binaries with one larger object and a much smaller asteroid satellite. While equal-mass binaries are apparently rare, contact binaries (two equally sized objects in contact with each other) make up another 15 percent of the population in this size range.

Thus at 2017 YE5 we have two objects that revolve around each other every 20 to 24 hours, as confirmed through brightness variations at visible light wavelengths at the Center for Solar System Studies in Rancho Cucamonga, California. As to composition, the two components do not reflect as much sunlight as a typical rocky asteroid, making it likely that 2017 YE5 has a surface as dark as charcoal. Differences in reflectivity of the two objects suggest that they have different composition at the surface or perhaps different surface features.

I was startled to learn that more than 50 binary asteroid systems have turned up in radar studies since 2000, with the majority consisting of one large object and a much smaller satellite. The differences in radar reflectivity found at 2017 YE5 have not appeared in this population. That makes this binary a useful system for the study of binary formation. Further study of combined radar and optical observations may allow tighter constraints on the density of the 2017 YE5 objects, which should give us a window into their composition and structure.

Next post: Unusual Companion for a Brown Dwarf Binary

Previous post: Ross 128b: Analyzing a Planet by the Light of its Star