The OSIRIS-REx spacecraft carries three cameras as it makes its way to the asteroid called Bennu, a suite that is collectively known as the OSIRIS-REx Camera Suite (OCAMS). So now we’re into the realm of OSIRIS-REx acronyms, and these should become familiar in coming months just as New Horizons’ instruments like LORRI (Long Range Reconnaissance Imager) and PEPSSI (Pluto Energetic Particle Spectrometer Science Investigation) did enroute to Pluto.

The camera called PolyCam is responsible for the image below, an animation showing the target acquired on August 17, at a distance of 2.25 million kilometers. PolyCam will serve as a reconnaissance camera as the spacecraft nears Bennu, but its other role is that illustrated here, as a long-range acquisition camera whose first visual of the target has been in the works for nine weeks. That’s the length of the planning process, testing, reviews and code upload.

“Right now, Bennu just looks like a star, a point source,” said Carl Hergenrother, UA Lunar and Planetary Laboratory staff scientist and OSIRIS-REx astronomy working group lead who proposed Bennu as the mission target during the early planning phase when the asteroid was simply known as 1999 RQ36. “That will change in November, when we will begin detailed observations and we’ll start seeing craters and boulders. You could say that’s when our asteroid will transition from being an astronomical object to an actual geological object.”

Image: For this animation, OSIRIS-REx image scientists combined five exposures of asteroid Bennu taken by the spacecraft’s PolyCam camera. At this distance, almost six times of that between the Earth and the moon, Bennu is just a point source, indistinguishable from a star other than the way it moves against the star field in the background. This will change dramatically once the spacecraft comes closer and makes its rendezvous with the asteroid in December. Credit: NASA/Goddard/University of Arizona.

We’re 98 days from arrival at Bennu on December 3. OSIRIS-REx controllers will be increasingly busy as the approach phase intensifies, as a glance at the approach activities shows. Here’s what’s ahead during this period, as presented in an LPL news release:

As for the rest of those acronyms beyond the OCAMS camera suite, we will be hearing more and more about a thermal spectrometer (OTES), the OVIRS visible and infrared spectrometer, the OLA laser altimeter and the REXIS X-ray spectrometer. On the OSIRIS-REx acronym itself, we can untangle it this way: Origins Spectral Interpretation Resource Identification Security Regolith Explorer.

Quite a mouthful, but it does condense the mission goals: To return a sample of a carbon-rich asteroid, define its properties, identify its chemistry and mineralogy, measure the Yarkovsky Effect on nearby asteroids (caused by uneven heating on a rotating asteroid, and capable of changing an asteroid trajectory), and document the morphology, geochemistry and spectral properties of the surface material. Along the way, we’ve already had some spectacular views. 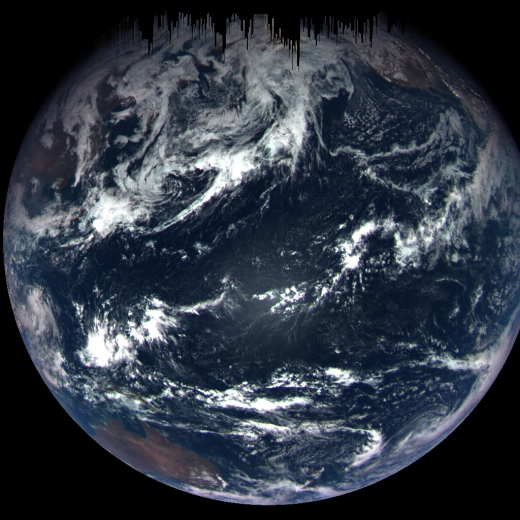 Image: A color composite image of Earth taken on Sept. 22 by the MapCam camera on NASA’s OSIRIS-REx spacecraft. This image was taken just hours after the spacecraft completed its Earth Gravity Assist at a range of approximately 170,000 kilometers. MapCam is part of the OSIRIS-REx Camera Suite (OCAMS) operated by the University of Arizona. Visible in this image are the Pacific Ocean and several familiar land masses, including Australia in the lower left, and Baja California and the southwestern United States in the upper right. The dark vertical streaks at the top of the image are caused by short exposure times (less than three milliseconds). Short exposure times are required for imaging an object as bright as Earth, but are not anticipated for an object as dark as the asteroid Bennu, which the camera was designed to image. Date Taken: Sept. 22, 2017. Instrument Used: OCAMS (MapCam). Credit: NASA/Goddard/University of Arizona.

The peoples of the ancient Nile delta saw the Egyptian god Osiris as being behind the spread of agriculture, therefore considering this deity to be a bringer of life. Thus the determination to come up with the name OSIRIS in this mission. After all, OSIRIS-REx will be returning samples of the kind of asteroid that may contain organics. Ultimately, the origin of life on our planet may be tied into delivery of materials from such asteroids, so the name seems appropriate.

Bear in mind that for all its interest, Bennu is a tiny world, no more than 500 meters in diameter. That will make Bennu the smallest object ever orbited by a spacecraft. OSIRIS-REx will map the asteroid in its first month after arrival, allowing for the first direct measurement of its mass. Sample collection is scheduled to begin in early July 2020, with the spacecraft returning to Earth to eject its Sample Return Capsule for a landing in the Utah desert in September, 2023.

Meanwhile, we continue to monitor the Japanese Hayabusa 2 spacecraft, which arrived at asteroid Ryugu in late June, and on which controllers have chosen a landing site. The spacecraft’s lander, the Mobile Asteroid Surface Scout (MASCOT), is scheduled to touch down on October 3 as part of the sample-return mission. More on Hayabusa 2 soon as we continue the exploration of near-Earth objects not only for the insights they give us into the early Solar System but also their potential for resource extraction and our need for planetary protection.

Next post: A Three Part Model for Jupiter’s Formation