How extraordinary that we can sometimes tell so much from so little. Extraordinary too how careful we must be to make sure we’re not reading too much into small sample sizes. All of which brings me to the Japanese Hayabusa probe, a spacecraft that survived continual mischance on its journey to asteroid 25143 Itokawa, but was somehow able to return tiny grains of surface material to Earth. And using those materials, scientists are now revealing a violent past that tells us something not only about how the asteroid formed but what happened to it long after.

The work of Kentaro Terada (Osaka University) and colleagues, the investigation follows a complicated path back to the earliest era of our system. But let’s start with the sample collection, which almost didn’t happen: Already damaged from a major solar flare not long after liftoff on May 9, 2003, Hayabusa (the word means ‘falcon’ in Japanese) would also lose two of its three stabilizing reaction wheels. And when the command to deploy its Minerva mini-lander was given, the rover was lost.

Amidst these problems, JAXA (the Japanese space agency) scientists were finally able to bring the spacecraft into contact with the surface, enough so to disturb dust grains it could store for return to Earth. This would mark the first time the surface of an asteroid could be examined in the laboratory, and a decade of this investigation is yielding insights. 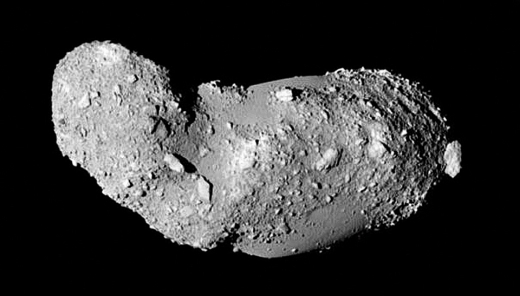 Image: The Hayabusa mission returned samples from Itokawa which are giving clues to the ancient history of the unusual asteroid. Image credit: ISAS, JAXA.

Scientists haven’t had a lot of material to work with, but it doesn’t take much. Examining micrometer-sized phosphate minerals using X-ray micro-tomography, the researchers have been able to perform isotope analysis of uranium (U) and lead (Pb), the latter enabled by Secondary Ion Mass Spectrometry (SIMS). This technique uses a focused ion beam on solid surfaces that causes the ejection of secondary ions that can be measured, revealing their molecular composition. Here’s how lead author Kentaro Terada explains the methods:

Itokawa was indeed formed some 4.6 billion years ago, in the formation period of the Solar System, but we also learn here that its subsequent life has been anything but serene. The second event Terada refers to would likely have been a collision with another asteroid.

Useful here is the comparison between the Itokawa particles and the composition of LL (Low (total) iron, Low metal) chondrites that fall to Earth. This work shows that the formation of Itokawa’s parent body was similar to that of typical LL chondrites — their mineralogy and geochemistry bear strong resemblances — but the collision history of Itokawa, with a catastrophic event 1.4 billion years ago, is significantly different from the ‘shock’ ages of most LL chondrites. The Itokawa shock history resembles, in fact, that of the Chelyabinsk meteorite.

The team goes deeper still, as witness this from the paper:

The observation of a deceleration in the rotation rate of Itokawa also constrains Itokawa’s evolution to within the last 0.1–0.4 million years during which period the conjunction of the two parts referred to as “head” and “body” by a low velocity impact occurred. This conjunction must have occurred after the disruption event and the subsequent main re-accumulation and possibly while the Itokawa fragments still resided within the main belt.

Itokawa was, in other words, pulverized by the collision revealed in these data, eventually reforming into the object we study today over a period of time. Following several billion years in the main asteroid belt, Itokawa was ejected by gravitational resonances into its current Earth-crossing orbit. Drawing on previous work on Itokawa orbits, the authors predict that at some point within the next million years, the asteroid will collide with Earth or else break apart. 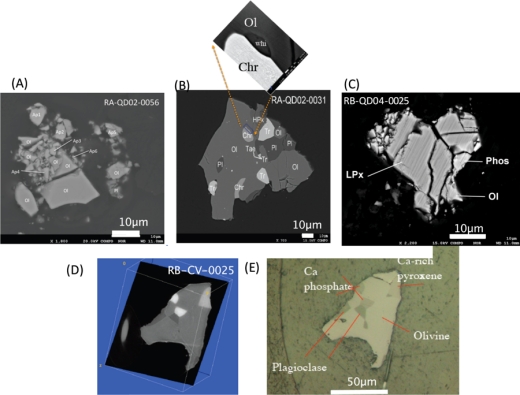 Image: Back-scattered electron images of the Itokawa particles. (A–C) Show back-scattered images of polished sections of RA-QD02-0056, RA-QD02-0031, RB-QD04-0025, respectively. (D) Shows the “simulated” slice image of RB-CV-0025 before polishing, based on X-ray microtomography. Here, the angle and depth are selected where the cross sections inside two phosphates become the largest. (E) Shows the “actual” microscope image after careful manual polishing. Most phosphate grains are on the order of 2 µm × 4 µm to 4 µm × 5 µm in size. Credit: Terada et al.

Much rides here on the analysis of a very small amount of material, as the paper is quick to add:

…we emphasize that our successful chronology results for Itokawa are based on a single brecciated particle, RA-QD02–0056, that includes several apatite grains. Such a brecciated grain is so fragile that it may not have been collected if the Hayabusa spacecraft sampling mechanism had operated as planned and its impactors struck the Itokawa surface.

We learn, however, that the Hayabusa team has found other particles that may include phosphorus materials, so further studies should put tighter constraints on the violent events of Itokawa’s evolution.