That small spacecraft can become game-changers, our topic last Friday, is nowhere more evident than in the success of Rover 1A and 1B, diminutive robot explorers that separated from the Hayabusa2 spacecraft at 0406 UTC on September 21 and landed soon after. Their target, the asteroid Ryugu, will be the site of detailed investigation not only by these two rovers, but also by two other landers, the German-built Mobile Asteroid Surface Scout (MASCOT) and Rover 2, the first of which is to begin operations early in October. Congratulations to JAXA, Japan’s space agency, for these early successes delivered by its Hayabusa2 mission.

Surface operations will be interesting indeed. Both rovers were released at an altitude of 55 meters above the surface, their successful deployment marking an advance over the original Hayabusa mission, which was unable to land its rover on the asteroid Itokawa in 2005. Assuming all goes well, the mission should gather three different samples of surface material for return to Earth in 2020. The third sample collection is to take advantage of Hayabusa2’s Small Carry-on Impactor (SCI), which will create a crater to retrieve subsurface material.

Why Ryugu? The object is a carbonaceous asteroid that has likely changed little since the Solar System’s early days, rich in organic material and offering us insight into the kind of objects that would have struck the Earth in the era when life’s raw materials, along with water, could have been delivered. It has also proven, as the JAXA team knew it would, a difficult landing site, with an uneven distribution of mass that produces variations in the gravitational pull over the surface.

On that score, it’s interesting to note that the Hayabusa2 controllers are sharing data with NASA’s OSIRIS-REx mission to asteroid Bennu. Likewise a sample return effort, OSIRIS-REx will face the same gravitational issues inherent in such small, irregular objects, which can be ameliorated by producing maps of each asteroid’s gravity. The three-dimensional models produced for the Dawn spacecraft at Ceres are the kind of software tools that will help both mission teams understand their targets better and ensure successful operations on the surface.

But back to Rover 1A and 1B, which have landed successfully and are both taking photographs and sending data, the first time we have landed and moved a probe autonomously on an asteroid surface. Although the first image was blurred because of the rover’s spin, it did display the receding Hayabusa spacecraft and the bright swath of the asteroid just below. Here’s JAXA’s mission tweet of that first image.

This is a picture from MINERVA-II1. The color photo was captured by Rover-1A on September 21 around 13:08 JST, immediately after separation from the spacecraft. Hayabusa2 is top and Ryugu's surface is below. The image is blurred because the rover is spinning. #asteroidlanding pic.twitter.com/CeeI5ZjgmM

Although I was disappointed with the blurred image that first came from the rover, it was good to be able to capture this shot as it was recorded by the rover as the Hayabusa2 spacecraft is shown. Moreover, with the image taken during the hop on the asteroid surface, I was able to confirm the effectiveness of this movement mechanism on the small celestial body and see the result of many years of research.

The ‘hop’ Yoshimitsu refers to is a reference to the means of locomotion the rovers will use on the surface. Remember that these vehicles are no more than 18 centimeters wide and 7 centimeters high, weighing on the order of 1 kilogram. In Ryugu’s light gravity, the rovers will make small jumps across the surface, a motion carefully constrained so as not to reach the object’s escape velocity. Below is the first Rover-1A image taken during a hop. 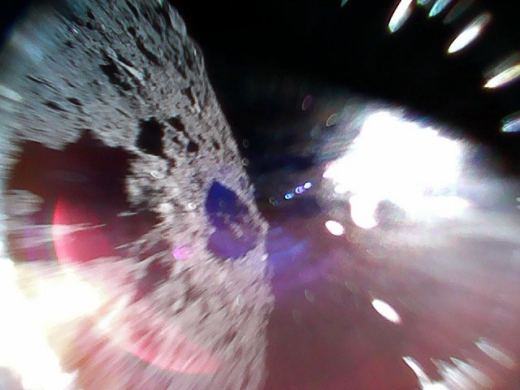 Image: Captured by Rover-1A on September 22 at around 11:44 JST. Color image captured while moving (during a hop) on the surface of Ryugu. The left-half of the image is the asteroid surface. The bright white region is due to sunlight. Credit: JAXA.

And have a look at an image taken during landing operations before Rover-1B reached the surface. Here the asteroid terrain is clearly defined. 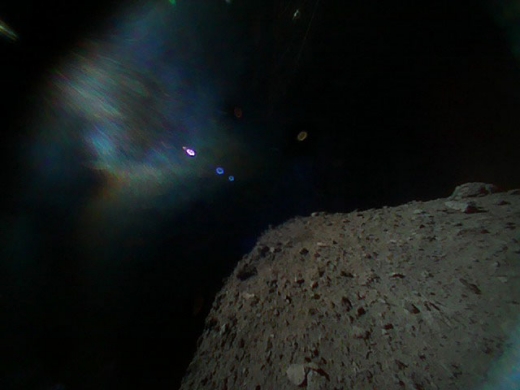 Image: Captured by Rover-1B on September 21 at around 13:07 JST. This color image was taken immediately after separation from the spacecraft. The surface of Ryugu is in the lower right. The coloured blur in the top left is due to the reflection of sunlight when the image was taken. Credit: JAXA.

I cannot find words to express how happy I am that we were able to realize mobile exploration on the surface of an asteroid. I am proud that Hayabusa2 was able to contribute to the creation of this technology for a new method of space exploration by surface movement on small bodies.

I would say Tsuda’s pride in his team and his hardware is more than justified. As we go forward with surface operations, let me commend Elizabeth Tasker’s fine work in spreading JAXA news in English. Even as JAXA offers live updates from Hayabusa2 in English and the official Hayabusa2 site offers its own coverage, Tasker, a British astrophysicist working at JAXA, has provided useful mission backgrounders like this one, as well as running the English-language Hayabusa2 Twitter account @haya2e_jaxa, and keeping up with her own Twitter account @girlandkat. There will be no shortage of Ryugu news in days ahead.