Can rapidly advancing laser technology and optics augment the way we do SETI? At the University of California, Santa Barbara, Phil Lubin believes they can, and he’s behind a project called the Trillion Planet Survey to put the idea into practice for the benefit of students. As an incentive for looking into a career in physics, an entire galaxy may be just the ticket.

For the target is the nearest galaxy to our own. The Trillion Planet Survey will use a suite of meter-class telescopes to search for continuous wave (CW) laser beacons from M31, the Andromeda galaxy. But TPS is more than a student exercise. The work builds on Lubin’s 2016 paper called “The Search for Directed Intelligence,” which makes the case that laser technology foreseen today could be seen across the universe. And that issue deserves further comment. 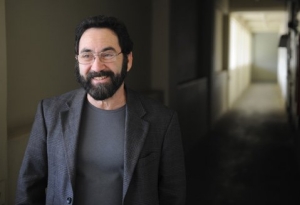 Centauri Dreams readers are familiar with Lubin’s work with DE-STAR, (Directed Energy Solar Targeting of Asteroids and exploRation), a scalable technology that involves phased arrays of lasers. DE-STAR installations could be used for purposes ranging from asteroid deflection (DE-STAR 2-3) to propelling an interstellar spacecraft to a substantial fraction of the speed of light (DE-STAR 3-4). The work led to NIAC funding (NASA Starlight) in 2015 examining beamed energy systems for propulsion in the context of miniature probes using wafer-scale photonics and is also the basis for Breakthough Starshot.

A bit more background here: Lubin’s Phase I study “A Roadmap to Interstellar Flight “ is available online. It was followed by Phase II work titled “Directed Energy Propulsion for Interstellar Exploration (DEEP-IN).” Lubin’s discussions with Pete Worden on these ideas led to talks with Yuri Milner in late 2015. The Breakthrough Starshot program draws on the DE-STAR work, particularly in its reliance on miniaturized payloads and, of course, a laser array for beamed propulsion, the latter an idea that had largely been associated with large sails rather than chip-sized payloads. Mason Peck and team’s work on ‘sprites’ is also a huge factor.

But let’s get back to the Trillion Planet Survey — if I start talking about the history of beamed propulsion concepts, I could spend days, and anyway, Jim Benford has already undertaken the task in these pages in his A Photon Beam Propulsion Timeline. What’s occupies us this morning is the range of ideas that play around the edges of beamed propulsion, one of them being the beam itself, and how it might be detected at substantial distances. Lubin’s DE-STAR 4, capable of hitting an asteroid with 1.4 megatons of energy per day, would stand out in many a sky.

In fact, according to Lubin’s calculations, such a system — if directed at another star — would be seen in systems as distant as 1000 light years as, briefly, the brightest star in the sky. Suddenly we’re talking SETI, because if we can build such systems in the foreseeable future, so can the kind of advanced civilizations we may one day discover among the stars. Indeed, directed energy systems might announce themselves with remarkable intensity. 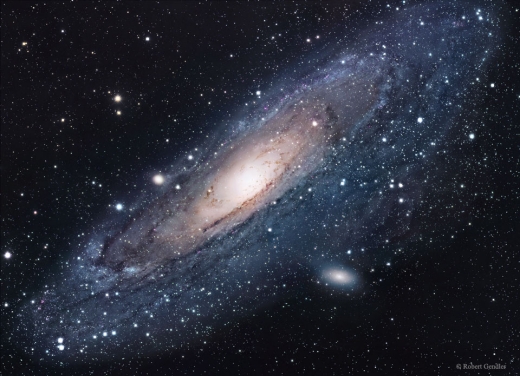 Lubin makes this point in his 2016 paper, in which he states “… even modest directed energy systems can be ‘seen’ as the brightest objects in the universe within a narrow laser linewidth.” Amplifying on this from the paper, he shows that stellar light in a narrow bandwidth would be very small in comparison to the beamed energy source:

In case 1) we treat the Sun as a prototype for a distant star, one that is unresolved in our telescope (due to seeing or diffraction limits) but one where the stellar light ends up in ~ one pixel of our detector. Clearly the laser is vastly brighter in this sense. Indeed for the narrower linewidth the laser is much brighter than an entire galaxy in this sense. For very narrow linewidth lasers (~ 1 Hz) the laser can be nearly as bright as the sum of all stars in the universe within the linewidth. Even modest directed energy systems can stand out as the brightest objects in the universe within the laser linewidth.

And again (and note here that the reference to ‘class 4’ is not to an extended Kardashev scale, but rather to a civilization transmitting at DE-STAR 4 levels, as defined in the paper):

As can be seen at the distance of the typical Kepler planets (~ 1 kly distant) a class 4 civilization… appears as the equivalent of a mag~0 star (ie the brightest star in the Earth’s nighttime sky), at 10 kly it would appear as about mag ~ 5, while the same civilization at the distance of the nearest large galaxy (Andromeda) would appear as the equivalent of a m~17 star. The former is easily seen with the naked eye (assuming the wavelength is in our detection band) while the latter is easily seen in a modest consumer level telescope.

Out of this emerges the idea that a powerful civilization could be detected with modest ground-based telescopes if it happened to be transmitting in our direction when we were observing. Hence the Trillion Planet Survey, which looks at using small telescopes such as those in the Las Cumbres Observatory’s robotic global network to make such a detection.

With M31 as the target, the students in the Trillion Planet Survey are conducting a survey of the galaxy as TPS gets its software pipeline into gear. Developed by Emory University student Andrew Stewart, the pipeline processes images under a set of assumptions. Says Stewart:

“First and foremost, we are assuming there is a civilization out there of similar or higher class than ours trying to broadcast their presence using an optical beam, perhaps of the ‘directed energy’ arrayed-type currently being developed here on Earth. Second, we assume the transmission wavelength of this beam to be one that we can detect. Lastly, we assume that this beacon has been left on long enough for the light to be detected by us. If these requirements are met and the extraterrestrial intelligence’s beam power and diameter are consistent with an Earth-type civilization class, our system will detect this signal.”

Screening transient signals from its M31 images, the team will then submit them to further processing in the software pipeline to eliminate false positives. The TPS website offers links to background information, including Lubin’s 2016 paper, but as of yet has little about the actual image processing, so I’ll simply quote from a UCSB news release on the matter:

“We’re in the process of surveying (Andromeda) right now and getting what’s called ‘the pipeline’ up and running,” said researcher Alex Polanski, a UC Santa Barbara undergraduate in Lubin’s group. A set of photos taken by the telescopes, each of which takes a 1/30th slice of Andromeda, will be knit together to create a single image, he explained. That one photograph will then be compared to a more pristine image in which there are no known transient signals — interfering signals from, say, satellites or spacecraft — in addition to the optical signals emanating from the stellar systems themselves. The survey photo would be expected to have the same signal values as the pristine “control” photo, leading to a difference of zero. But a difference greater than zero could indicate a transient signal source, Polanski explained. Those transient signals would then be further processed in the software pipeline developed by Stewart to kick out false positives. In the future the team plans to use simultaneous multiple color imaging to help remove false positives as well.

Why Andromeda? The Trillion Planet Survey website notes that the galaxy is home to at least one trillion stars, a stellar density higher than the Milky Way’s, and thus represents “…an unprecedented number of targets relative to other past SETI searches.” The project gets the students who largely run it into the SETI business, juggling the variables as we consider strategies for detecting other civilizations and upgrading existing search techniques, particularly as we take into account the progress of exponentially accelerating photonic technologies.

Projects like these can exert a powerful incentive for students anxious to make a career out of physics. Thus Caitlin Gainey, now a freshman in physics at UC Santa Barbara:

“In the Trillion Planet Survey especially, we experience something very inspiring: We have the opportunity to look out of our earthly bubble at entire galaxies, which could potentially have other beings looking right back at us. The mere possibility of extraterrestrial intelligence is something very new and incredibly intriguing, so I’m excited to really delve into the search this coming year.”

And considering that any signal arriving from M31 would have been enroute for well over 2 million years, the TPS also offers the chance to involve students in the concept of SETI as a form of archaeology. We could discover evidence of a civilization long dead through signals sent well before civilization arose on Earth. A ‘funeral beacon’ announcing the demise of a once-great civilization is a possibility. In terms of artifacts, the search for Dyson Spheres or other megastructures is another. The larger picture is that evidence of extraterrestrial intelligence can come in various forms, including optical or radio signals as well as artifacts detectable through astronomy. It’s a field we continue to examine here, because that search has just begun.