To me, the image below is emblematic of space exploration. We look out at vistas that have never before been seen by human eye, contextualized by the banks of equipment that connect us to our probes on distant worlds. The fact that we can then sling these images globally through the Internet, opening them up to anyone with a computer at hand, gives them additional weight. Through such technologies we may eventually recover what we used to take for granted in the days of the Moon race, a sense of global participation and engagement.

We’re looking at the MASCOT Control Centre at the German Aerospace Center (Deutsches Zentrum für Luft- und Raumfahrt; DLR) in Cologne, where the MASCOT lander was followed through its separation from the Japanese Hayabusa2 probe on October 3, its landing on asteroid Ryugu, and the end of the mission, some 17 hours later. 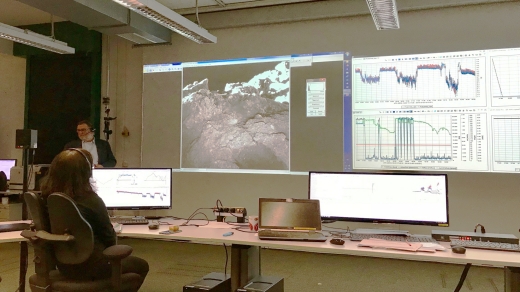 Image: In the foreground is MASCOT project manager Tra-Mi Ho from the DLR Institute of Space Systems in Bremen at the MASCOT Control Centre of the DLR Microgravity User Support Centre in Cologne. In the background is Ralf Jaumann, scientific director of MASCOT, presenting some of the 120 images taken with the DLR camera MASCAM. Credit: DLR.

As scientists from Japan, Germany and France looked on, MASCOT (Mobile Asteroid Surface Scout) successfully acquired data about the surface of the asteroid at several locations and safely returned its data to Hayabusa2 before its battery became depleted. A full 17 hours of battery life allowed an extra hour of operations, data collection, image acquisition and movement to various surface locations.

MASCOT is a mobile device, capable of using its swing-arm to reposition itself as needed. Attitude changes can keep the top antenna directed upward while the spectroscopic microscope faces downwards, a fact controllers put to good use. Says MASCOT operations manager Christian Krause (DLR):

“After a first automated reorientation hop, it ended up in an unfavourable position. With another manually commanded hopping manoeuvre, we were able to place MASCOT in another favourable position thanks to the very precisely controlled swing arm.”

MASCOT moved several meters to its early measuring points, with a longer move at the last as controllers took advantage of the remaining battery life. Three asteroid days and two asteroid nights, with a day-night cycle lasting 7 hours and 36 minutes, covered the lander’s operations. 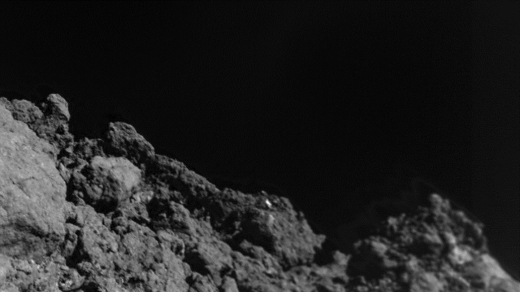 Image: The images acquired with the MASCAM camera on the MASCOT lander during the descent show an extremely rugged surface covered with numerous angular rocks. Ryugu, a four-and-a-half billion year-old C-type asteroid has shown the scientists something they had not expected, even though more than a dozen asteroids have been explored up close by space probes. On this close-up, there are no areas covered with dust — the regolith that results from the fragmentation of rocks due to exposure to micrometeorite impacts and high-energy cosmic particles over billions of years. The image from the rotating MASCOT lander was taken at a height of about 10 to 20 meters. Credit: MASCOT/DLR/JAXA.

The dark surface of Ryugu reflects about 2.5 percent of incoming starlight, so that in the image below, the area shown is as dark as asphalt. According to DLR, the details of the terrain can be captured because of the photosensitive semiconductor elements of the 1000 by 1000 pixel CMOS (complementary metal-oxide semiconductor) camera sensor, which can enhance low light signals and produce usable image data. 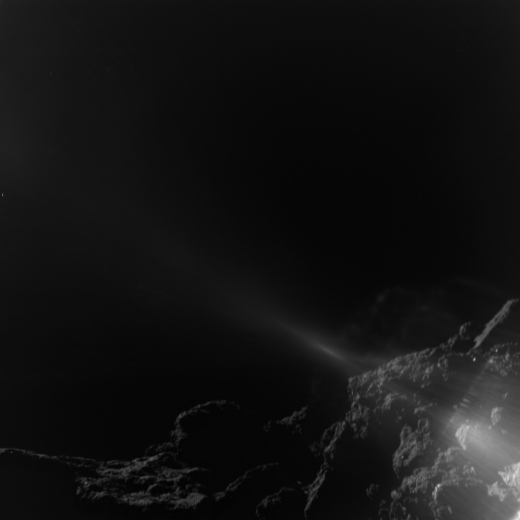 Image: DLR’s MASCAM camera took 20 images during MASCOT’s 20-minute fall to Ryugu, following its separation from Hayabusa2, which took place at 51 meters above the asteroid’s surface. This image shows the landscape near the first touchdown location on Ryugu from a height of about 25 to 10 meters. Light reflections on the frame structure of the camera body scatter into the field of vision of the MASCAM (bottom right) as a result of the backlit light of the Sun shining on Ryugu. Credit: MASCOT/DLR/JAXA.

We now collect data and go about evaluating the results of MASCOT’s foray. The small lander had a short life but it seems to have delivered on every expectation. As Hayabusa2 operations continue at Ryugu, we’ll learn a great deal about the early history of the Solar System and the composition of near-Earth asteroids like these, all of which we’ll be able to weigh against what we find at asteroid Bennu when the OSIRIS-REx mission reaches its target in December. 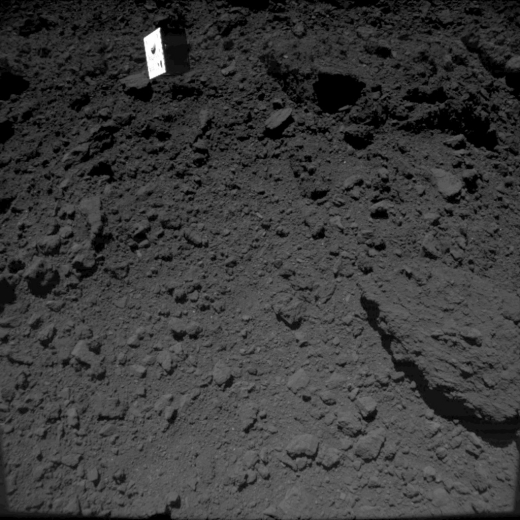 Image: MASCOT as photographed by the ONC-W2 immediately after separation. MASCOT was captured on three consecutively shot images, with image capture times between 10:57:54 JST – 10:58:14 JST on October 3. Since separation time itself was at 10:57:20 JST, this image was captured immediately after separation. The ONC-W2 is a camera attached to the side of the spacecraft and is shooting diagonally downward from Hayabusa2. This gives an image showing MASCOT descending with the surface of Ryugu in the background. Credit: JAXA, University of Tokyo, Kochi University, Rikkyo University, Nagoya University, Chiba Institute of Technology, Meiji University, University of Aizu, AIST.

Bear in mind that the the 50th annual meeting of the Division for Planetary Sciences (DPS) of the American Astronomical Society (AAS) is coming up in Knoxville in late October. Among the press conferences scheduled are one covering Hayabusa2 developments and another the latest from New Horizons. The coming weeks will be a busy time for Solar System exploration.