With a robotic presence at Ryugu, JAXA’s Hayabusa2 mission is showing what can be done as we subject near-Earth asteroids to scrutiny. We’ll doubtless learn a lot about asteroid composition, all of which can factor into, among other things, the question of how we would approach changing the trajectory of any object that looked like it might come too close to Earth. The case for studying near-Earth asteroids likewise extends to learning more about the evolution of the Solar System.

NASA’s first near-Earth asteroid visit will take place on December 3, when the OSIRIS-REx mission arrives at asteroid Bennu, with a suite of instruments including the OCAMS camera suite (PolyCam, MapCam, and SamCam), the OTES thermal spectrometer, the OVIRS visible and infrared spectrometer, the OLA laser altimeter, and the REXIS x-ray spectrometer. Like Hayabusa2, this mission is designed to collect a surface sample and return it to Earth.

And while Hayabusa2 has commanded the asteroid headlines in recent days, OSIRIS-REx has been active in adjusting its course for the December arrival. The first of four asteroid approach maneuvers (AAM-1) took place on October 1, with the main engine thrusters braking the craft relative to Bennu, slowing the approach speed by 351.298 meters per second. The current speed is 140 m/sec after a burn that consumed on the order of 240 kilograms of fuel.

Science operations began on August 17, with PolyCam taking optical navigation images of Bennu on a Monday, Wednesday and Friday cadence until the AAM-1 burn, and then moving to daily ‘OpNavs’ afterwards. The MapCam camera is also taking images that measure changes in reflected light from Bennu’s surface as sunlight strikes it at a variety of angles, which helps to determine the asteroid’s albedo as we measure light reflection from various angles.

The AAM-1 maneuver is, as I mentioned above, the first in a series of four designed to slow the spacecraft to match Bennu’s orbit. Asteroid Approach Maneuver-2 is to occur on October 15. As the approach phase continues, OSIRIS-REx has three other high-priority tasks:

It was in August that the PolyCam camera obtained the first image from 2.2 million kilometers out. Subsequently, the MapCam image below was obtained. 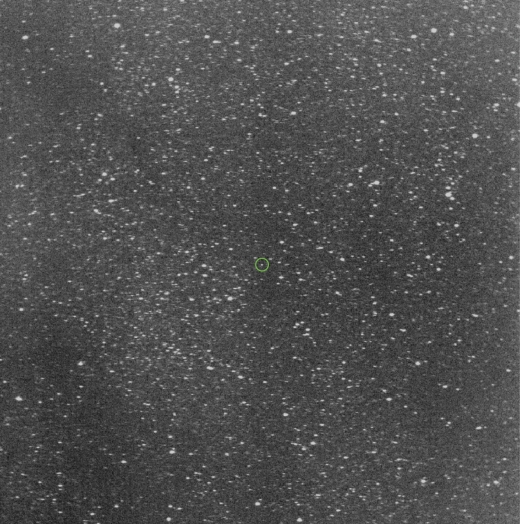 Image: This MapCam image of the space surrounding asteroid Bennu was taken on Sept. 12, 2018, during the OSIRIS-REx mission’s Dust Plume Search observation campaign. Bennu, circled in green, is approximately 1 million km from the spacecraft. The image was created by co-adding 64 ten-second exposures. Credit: NASA/Goddard/University of Arizona.

Bennu shows up here as little more than a dot in an image that is part of OSIRIS-REx’s search for dust and gas plumes on Bennu’s surface. These could present problems during close operations around the object, and could also provide clues about possible cometary activity. The search did not turn up any dust plumes from Bennu, but a second search is planned once the spacecraft arrives.

The first month at the asteroid will be taken up with flybys of Bennu’s north pole, equator and south pole at distances between 19 and 7 kilometers, allowing for direct measurements of its mass as well as close observation of the surface. The surface surveys will allow controllers to identify two possible landing sites for the sample collection, which is scheduled for early July, 2020. OSIRIS-REx will then return to Earth, ejecting the Sample Return Capsule for landing in Utah in September of 2023.

The latest image offered up by the OSIRIS-REx team is an animation showing Bennu brightening during the approach from mid-August to the beginning of October.

Image: This processed and cropped set of images shows Bennu (in the center of the frame) from the perspective of the OSIRIS-REx spacecraft as it approaches the asteroid. During the period between August 17 and October 1, the spacecraft’s PolyCam imager obtained this series of 20 four-second exposures every Monday, Wednesday, and Friday as part of the mission’s optical navigation campaign. From the first to the last image, the spacecraft’s range to Bennu decreased from 2.2 million km to 192,000 km, and Bennu brightened from approximately magnitude 13 to magnitude 8.8 from the spacecraft’s perspective. Date Taken: Aug. 17 – Oct. 1, 2018. Credit: NASA/Goddard/University of Arizona.

Of all the OSIRIS-REx images I’ve seen so far, I think the one below is the prize. But then, I always did like taking the long view. 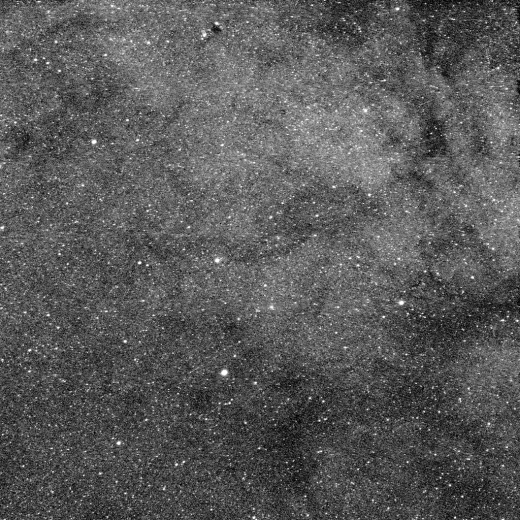 Image: On July 16, 2018, NASA’s OSIRIS-REx spacecraft obtained this image of the Milky Way near the star Gamma2 Sagittarii during a routine spacecraft systems check. The image is a 10 second exposure acquired using the panchromatic filter of the spacecraft’s MapCam camera. The bright star in the lower center of the image is Gamma2 Sagittarii, which marks the tip of the spout of Sagittarius’ teapot near the center of the galaxy. The image is roughly centered on Baade’s Window, one of the brightest patches of the Milky Way, which fills approximately one fourth of the field of view. Relatively low amounts of interstellar dust in this region make it possible to view a part of the galaxy that is usually obscured. By contrast, the dark region near the top of the image, the Ink Spot Nebula, is a dense cloud made up of small dust grains that block the light of stars in the background. MapCam is part of the OSIRIS-REx Camera Suite (OCAMS) operated by the University of Arizona. Date Taken: July 16, 2018. Credit: NASA/GSFC/University of Arizona.

We’re 53 days from arrival at Bennu. You can follow news of OSIRIS-REx at its NASA page or via Twitter at @OSIRIS-REx. Dante Lauretta (Lunar and Planetary Laboratory) is principal investigator on the mission; the University of Arizona OSIRIS-REx page is here. And be sure to check Emily Lakdawalla’s excellent overview of operations at Bennu in the runup to arrival.