Birth of a Supercluster

Long-time Centauri Dreams readers know that I love things that challenge our sense of scale, the kind of comparison that, for example, tells us that if we traveled the distance from the Earth to the Sun, we would have to repeat that distance 268,770 times just to reach the nearest star. It’s much simpler, of course, to say that Proxima Centauri is 4.25 light years from us, but it’s the relating of distances to things that are closer to us that gets across scale, especially for those who are just beginning their astronomical explorations. And I have to admit that the scales involved in going interstellar still pull me up short at times when I ponder them.

So how about this for scale: We have somewhere between 200 billion and 300 billion stars in our galaxy (the number is flexible enough that you’ll see a wide range in the literature). Relate that to the Local Group, the gathering of galaxies that includes both the Milky Way and M31, the Andromeda Galaxy. These are the two most massive members of the Local Group, but depending on how we count dwarf galaxies, it contains more than 30 members spread out over a diameter of 10 million light years. Both the Milky Way and M31 have their own dwarf galaxies.

Then consider the concept of a ‘supercluster,’ which contains galaxy groups within it. Thus the Milky Way is considered part of both the Local Group as well as the Laniakea Supercluster, which is itself home to approximately 100,000 galaxies and subsumes the Virgo Supercluster. The Laniakea Supercluster emerged in the literature in 2014 in a paper examining the relative velocity of galaxies. Laniakea is a Hawaiian word meaning ‘immense heaven.’ R. Brent Tully (University of Hawaii at Manoa) and team identified this structure some 520 million light years in diameter, containing 100,000 galaxies, with a mass of one hundred million billion Suns.

Now a team of astronomers working with data from the European Southern Observatory’s Very Large Telescope (VLT) using its VIMOS (VIsible Multi-Object Spectrograph) instrument has identified a proto-supercluster that formed in the early universe 2.3 billion years after the Big Bang (i.e., its redshift of 2.45 means that astronomers observe it as it was 2.3 billion years after the Big Bang). ESO is describing the discovery, which they have nicknamed Hyperion, as the most massive structure yet found so early in the formation of the Universe.

“This is the first time that such a large structure has been identified at such a high redshift, just over 2 billion years after the Big Bang,” explained the first author of the discovery paper, Olga Cucciati. “Normally these kinds of structures are known at lower redshifts, which means when the Universe has had much more time to evolve and construct such huge things. It was a surprise to see something this evolved when the Universe was relatively young!” 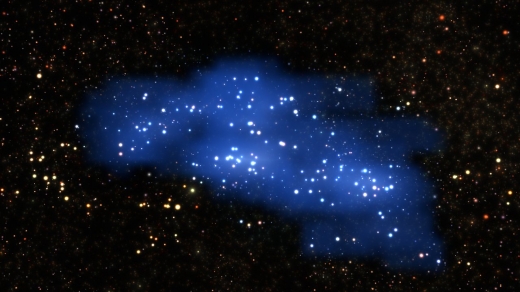 Image: An international team of astronomers using the VIMOS instrument of ESO’s Very Large Telescope have uncovered a titanic structure in the early Universe. This galaxy proto-supercluster — which they nickname Hyperion — was unveiled by new measurements and a complex examination of archive data. This is the largest and most massive structure yet found at such a remote time and distance — merely 2 billion years after the Big Bang. Credit: ESO/Luis Calçada and Olga Cucciati.

Hyperion emerged in the analysis of a field in the constellation Sextans carried out by researchers in the VIMOS Ultra-deep Survey, which has been creating a 3D map of the distribution of over 10,000 galaxies. Hyperion contains seven high-density regions connected by thin ‘filaments’ of galaxies. The average supercluster, says Brian Lemaux (University of California, Davis), an astronomer and co-leader of the team behind this result, shows more concentrated distribution of mass and clear structure. “But in Hyperion,” Lemaux adds, “the mass is distributed much more uniformly in a series of connected blobs, populated by loose associations of galaxies.”

The mass distribution makes sense when you consider that nearby superclusters have had billions of years to create the observed clumping into denser regions with more defined structure. We might expect Hyperion to evolve into something more like the Virgo Supercluster, and studying it should provide insights into how galactic superclusters evolve. It offers a rare glimpse into the early era of supercluster formation, and another signpost of immensity.

What’s ahead for the study of Hyperion? Calling it a “unique possibility to study a rich supercluster in formation 11 billion years ago,” the paper adds this:

This impressive structure deserves a more detailed analysis. On the one hand, it would be interesting to compare its mass and volume with similar findings in simulations, because the relative abundance of superclusters could be used to probe deviations from the predictions of the standard ΛCDM model [Lambda cold dark matter, a model that includes a cosmological constant, dark energy and cold dark matter]. On the other hand, it is crucial to obtain a more complete census of the galaxies residing in the proto-supercluster and its surroundings. With this new data, it would be possible to study the co-evolution of galaxies and the environment in which they reside, at an epoch (z ∼ 2 − 2.5) when galaxies are peaking in their star-formation activity.

The Hyperion findings are being compared to the results of the Observations of Redshift Evolution in Large Scale Environments (ORELSE) survey, led by Lori Lubin (UC-Davis), who was on the team that discovered Hyperion. ORELSE studies superclusters closer to Earth using data from the W.M. Keck Observatory in Hawaii. The next step will be to map out Hyperion in greater detail.

The paper is Cucciati, et al., “The progeny of a Cosmic Titan: a massive multi-component proto-supercluster in formation at z=2.45 in VUDS,” accepted at Astronomy & Astrophysics. Preprint.