With two rovers and a lander already deployed on the asteroid 162173 Ryugu, the Japan Aerospace Exploration Agency (JAXA) must be basking in the glow of an unusually successful venture. Now we turn to a key part of the Hayabusa2 mission, the retrieval of a surface sample. Two touchdown rehearsals have gone well, providing detailed views of the asteroid’s surface. The plan is to return samples to Earth in December of 2020, but let’s continue to take one thing at a time. Sample retrieval can be dicey, as we saw with the first Hayabusa.

Once known as MUSES-C, the original Hayabusa reached asteroid Itokawa in September of 2005 (I can’t believe it was that long ago — as the cliché would have it, it seems like yesterday). A series of enroute problems included a solar flare that damaged the craft’s solar cells and the failure of attitude-adjusting reaction wheels, while the launch of a probe called MINERVA also failed. Nonetheless, surface particles from Itokawa were successfully returned to Earth.

Now the Hayabusa2 team works on landing site selection, no easy task. Keeping the spacecraft safe means looking for regions ideally 100 meters in diameter in which there is an average slope of less than 30 degrees, boulder heights less than 50 centimeters, and an absolute temperature less than 370 Kelvin (97 degrees Celsius). These constraints limit the site to 30 degrees either side of the asteroid’s equator, all this on a diminutive object that presents its own problems.

“Unlike other asteroids we have visited, Ryugu has no powder, no fine-grain regolith. That makes selecting a place to sample more challenging,” said the Planetary Science Institute’s Deborah Domingue. “We are helping characterize the surface to optimize landing site selection.” 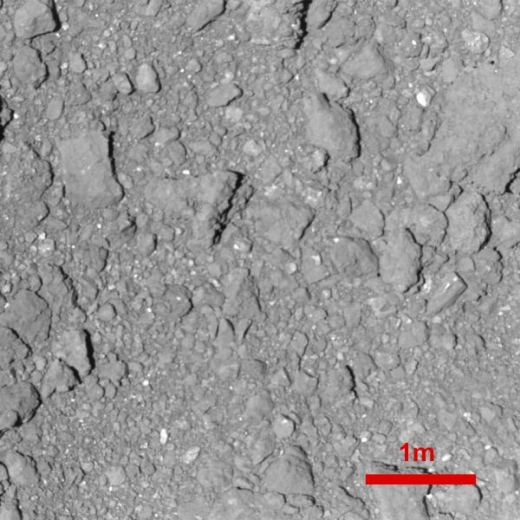 “Since the approach phase began last June, my main goal was to support the Hayabusa2 team in the preparation of touch down operations,” said Le Corre. “In order to assess the sampleability of Ryugu’s terrains I have worked on generating products such as ONC image mosaics and local topographic models. Our data show that the Hayabusa2 team has to carefully select a sampling site to avoid the numerous boulders present on the surface.”

The image below (taken by a camera that, incidentally, was funded by public contributions) comes from the Hayabusa2 website and shows the sampler horn. 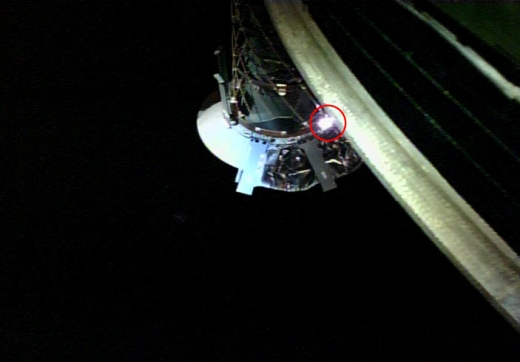 Image: Test photograph of the sampler horn taken by the Small Monitor Camera (CAM-H) on April 16, 2018. The shiny part in the red circle is the target plate of the sampler horn which is illuminated by the LRF-S2 laser. If the laser misses this plate, touchdown is in process and bullets will fire to stir up surface material. Credit: JAXA.

When the distance measurement from LRF-S2 changes or the laser from LRF-S2 deviates from its target at the base of the sampler horn, bullets will be fired to stir up the surface material for collection. This makes the LRF-S2 an important device for successful sample collection.

To keep up with Hayabusa2 operations, keep an eye on Twitter @haya2e_jaxa, from which I drew the tweet below.

Dropping down…! Sequential images taken during the approach to Ryugu in our second touchdown rehearsal, TD1-R1-A. https://t.co/sZ9Z8jb6tk pic.twitter.com/wzcG7XcaEX

And here is the image with possible touchdown area LO8-B, considered the most promising candidate. 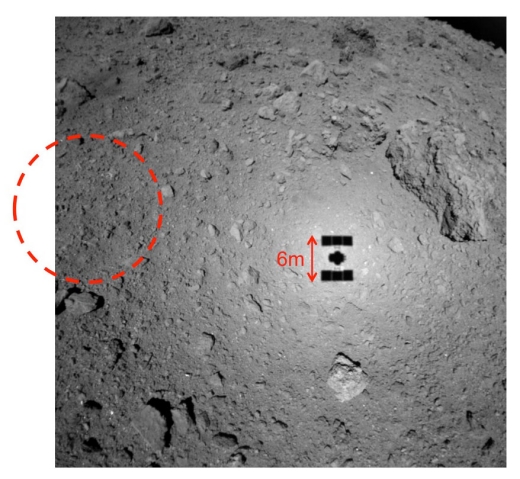 Image: The surface of Ryugu captured with the ONC-W1 at an altitude of about 47m. The image was taken on October 15, 2018 at 22:45 JST. The red circle indicates the candidate point for touchdown, L08-B. Credit: JAXA, University of Tokyo, Kochi University, Rikkyo University, Nagoya University, Chiba Institute of Technology, Meiji University, University of Aizu, AIST).