Following a week when we learned of the end of both Kepler and Dawn, let’s turn to a mission that is just coming into its own. The earliest images of target asteroid 101955 Bennu from OSIRIS-REx have been tightened by computer algorithm to heighten their resolution. The mission plan here is to examine the small object (approximately 500 meters in mean diameter) and return samples to Earth in 2023.

More than a few people have reacted to the similarity in shape between this asteroid, a carbonaceous (C-type) Earth-crossing object in the Apollo group of near-Earth asteroids, and 162173 Ryugu, now under active exploration by the Japanese Hayabusa2 mission. Here we’re looking at Bennu through the OSIRIS-REx PolyCam, one of three cameras aboard the spacecraft, from a distance of 330 kilometers. The image is a combination of eight images taken by PolyCam that have been combined to cancel out the asteroid’s rotation and produce a high-resolution result.

“The fact that the Japanese mission has reached its target a little ahead of us turns out to be extremely interesting, as we can now interpret our results and compare to the results obtained by another mission almost on real time.” 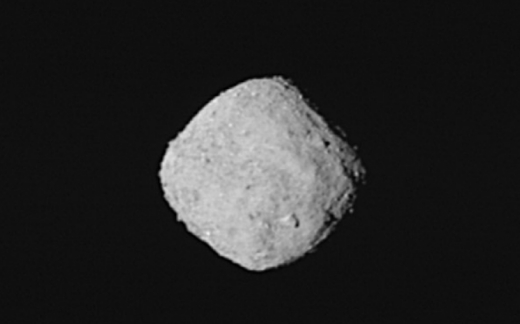 Image: This “super-resolution” view of asteroid Bennu was created using eight images obtained by NASA’s OSIRIS-REx spacecraft on Oct. 29, 2018 from a distance of about 330 km. The spacecraft was moving as it captured the images with the PolyCam camera, and Bennu rotated 1.2 degrees during the nearly one minute that elapsed between the first and the last snapshot. The team used a super-resolution algorithm to combine the eight images and produce a higher resolution view of the asteroid. Bennu occupies about 100 pixels and is oriented with its north pole at the top of the image. Date Taken: Oct. 29, 2018. Instrument Used: OCAMS (PolyCam). Credit: NASA/Goddard/University of Arizona.

The team from the IAC, which functions as part of the Image Processing Working Group (IPWG) for the OSIRIS-REx mission, is examining the early imagery from Bennu as an initial step in calibrations for comparison with later, higher-resolution images taken with color filters. In December, images from the spacecraft’s MapCam will begin coming in, putting those filters to work. The color maps thus generated will be used to break down the geographical distribution of silicates and other materials on the asteroid. And, of course, they will also play into the selection of a landing site from which a sample will be collected and returned to Earth.

OSIRIS-REx executed its third asteroid approach maneuver (AAM-3) on October 29, a set of thruster burns designed to slow the craft relative to Bennu from approximately 5.2 m/sec to .11 m/sec. The maneuver, verified by tracking data and telemetry, was designed to maximize the collection of high-resolution images as the spacecraft closes on the target. Another burn, the fourth in a series that began on October 1, will be executed on November 12, adjusting the craft’s trajectory for arrival at a position some 20 kilometers from Bennu on December 3.

And here’s another interesting image, a look at both Bennu and Jupiter, as seen by the OSIRIS-REx Polycam. The shot of Bennu was taken on October 22 of this year, with Bennu some 3,650 kilometers away, while the Jupiter image was captured on February 12, 2017 at a distance of 673 million kilometers. Notice the clear spherical shape of Jupiter as compared to the diamond-shaped Bennu, a shape predicted by ground-based radar observations.

Image: When these images were taken, Bennu was about five times closer to the Sun than Jupiter was, so the asteroid was receiving significantly more sunlight. If Bennu and Jupiter were equally reflective, the asteroid would appear about 25 times brighter in this image due to its proximity to the Sun. But Bennu’s surface is so dark (only reflecting about 3 to 4 percent of the incoming sunlight) that it appears darker than Jupiter despite being much closer to the Sun. Credit: NASA/Goddard/University of Arizona.

Carbonaceous C-type asteroids, as the image makes clear in this case, are low in albedo, presumably because of the large amount of carbon mixing with surface rocks and minerals.

How many times is too many times to ask #AreWeThereYet on a single trip? Asking for a friend (who is now only a couple hundred kilometers from #asteroid Bennu)…