On the Earliest Stars

If you’ve given some thought to the Fermi question lately — and reading Milan Ćirković’s The Great Silence, I’ve been thinking about it quite a bit — then today’s story about an ancient star is of particular note. Fermi, you’ll recall, famously wanted to know why we didn’t see other civilizations, given the apparent potential for our galaxy to produce life elsewhere. Now a paper in The Astrophysical Journal adds punch to the question by making the case that the part of the galaxy in which we reside may be older than we have thought.

Finding that our Sun is younger than many nearby stars, an issue that Charles Lineweaver (Australian National University), among others, has examined, would allow even more time for civilizations to have emerged in the galactic neighborhood. But let’s now leave Fermi behind to look at the tiny star that prompts these ruminations (and to be sure, the paper on this star makes no mention of Fermi, but does tell us something quite interesting about the early cosmos).

Discovered by Kevin Schlaufman (Johns Hopkins University), 2MASS J18082002–5104378 B is the smaller of a binary pair that orbit a common barycenter. While the primary had been previously discovered, it was up to Schlaufman and team to uncover the far more interesting companion.

Schlaufman used data from the Magellan Clay Telescope, Las Campanas Observatory and the Gemini Observatory in finding and characterizing this star. What distinguishes 2MASS J18082002–5104378 B is its size, metallicity and age. On the latter, Schlaufman believes it could be as little as a single generation removed from the Big Bang itself, and the paper pegs its age at approximately 13.5 billion years. We’ve discovered other ancient stars with low metal content, but this one is located in the Milky Way’s thin disk, that part of the galaxy in which we reside. Hence the issue of the age of local stars, as the paper recounts: 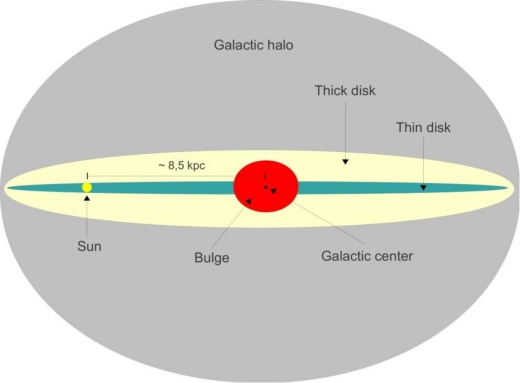 We are talking about a star with a content of metals roughly the same as the planet Mercury. Contrast that with the Sun, whose heavy element content is equal to approximately 14 Jupiters.

2MASS J18082002–5104378 B (here’s hoping it gets a new moniker, perhaps ‘Schlaufman’s Star’) is the lowest-mass ultra metal-poor star currently known. Yet despite its extreme age and low metallicity, it is found in the thin disk, and in fact is the most metal-poor star yet found that is part of the thin disk. We would expect stars forming not long after the Big Bang to be low in metals, given that hydrogen, helium and trace lithium are all they had to work with. It would be later stellar generations that could form with the heavier elements these early stars produced in their cores, seeding the cosmos with metals through supernovae explosions.

Call that first generation Population III stars, which when first modeled by researchers produced stars far more massive than the Sun, giant objects that should form as single stars in isolation. Later models dropped the range of mass to as low as 10 solar masses but also extended it on the high end. Low-mass Population III stars only recently began to be considered when the issue of fragmentation began appearing in numerical simulations. The discovery of 2MASS J18082002–5104378 B makes the case for the emergence of such stars. 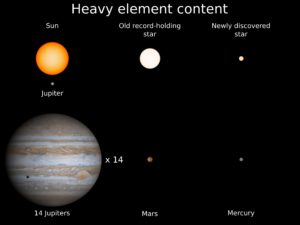 We use models of protostellar disks around both UMP [low-mass ultra metal-poor] and Pop III protostars plus scaling relations for the fragment mass and migration time to argue that the existence of the low-mass UMP star 2MASS J18082002–5104378 B and the extremely metal-poor (EMP) brown dwarf HE 1523–0901 B discovered by Hansen et al. (2015) implies the survival of solar-mass fragments around Pop III stars…

Thus we may be looking at a new observable that can take us back to conditions at the earliest era of star formation:

Whereas fragmentation at the molecular core scale will likely lead to massive binary stars, the emergence of gravitationally bound solar-mass clumps in protostellar disks via gravitational instability has the potential to produce low-mass Pop III stars that may be observable in the Milky Way.

Thus far about 30 stars considered ultra metal-poor have been identified, all of roughly the Sun’s mass, but 2MASS J18082002–5104378 B is only 14 percent of the Sun’s mass. The mass, incidentally, was determined by radial velocity methods, examining the wobble of the primary star. Backing out to the wider picture, our view of the earliest stars as extremely massive objects, unobservable to us because they would have burned quickly and died, has to be modified to include low-mass stars that can, at least in some situations, emerge, as 2MASS J18082002–5104378 B did, burning for long lifetimes indeed. Says Schlaufman:

“If our inference is correct, then low-mass stars that have a composition exclusively the outcome of the Big Bang can exist. Even though we have not yet found an object like that in our galaxy, it can exist.”