The first interstellar object detected in our own Solar System, ‘Oumuamua has a pleasing name, translating from the Hawaiian as something like ‘far visitor first to arrive,’ or words to that effect. It’s also proven a frustrating catch ever since detected by the University of Hawaii’s Pan-STARRS 1 telescope on Haleakala, Hawaii during a search for near-Earth asteroids. We’ve put telescope resources on Earth and in space on the object, but our observing time is up.

For ‘Oumuamua is now well on its way out of the Solar System, so we’re left to massage the data we have in hopes of gaining new insights. Davide Farnocchia (Center for Near Earth Object Studies, JPL) encapsulates the issue:

“Usually, if we get a measurement from a comet that’s kind of weird, we go back and measure it again until we understand what we’re seeing. But this one is gone forever; we probably know as much about it as we’re ever going to know.”

Thus Avi Loeb’s recent paper with Shmuel Bialy discussing the object’s acceleration in terms of solar radiation pressure — could it be a technological artifact? — and continued work on the issue of cometary outgassing to explain its anomalous acceleration. See ‘Oumuamua, Thin Films and Lightsails for the former. On the latter, we have new work from the abovementioned Farnocchia, working with lead author David Trilling (Northern Arizona University) and colleagues in a paper published in The Astronomical Journal.

Trilling and team examine data from the Spitzer Space Telescope taken in November of 2017, an analysis that shows that the object was too faint for Spitzer to detect when it began observations two months after ‘Oumuamua’s closest approach to the Sun in September of that year. That fact is itself valuable, for it sets limits on the object’s total surface area. The size issue is important, because an earlier study led by ESA’s Marco Micheli (citation below) found the object’s acceleration to be the result of outgassing, which worked, according to the team’s calculations, by assuming that ‘Oumuamua was smaller than typical Solar System comets (see ‘Oumuamua: New Data Point to a Comet). 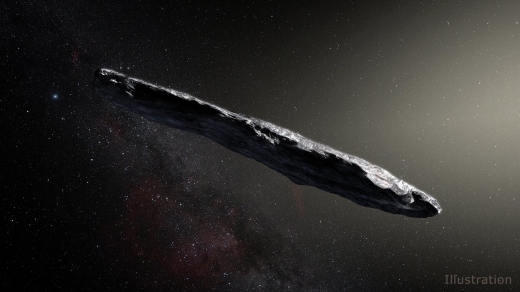 Image: Is this the shape of ‘Oumuamua? An artist’s concept of interstellar asteroid 1I/2017 U1 (‘Oumuamua) as it passed through the solar system after its discovery in October 2017. Observations of ‘Oumuamua indicate that it must be very elongated because of its dramatic variations in brightness as it tumbled through space. Credit: European Southern Observatory / M. Kornmesser.

So what constraints can we apply from the Spitzer data? Spitzer works in the infrared, adding valuable adjunct information to the variations in ‘Oumuamua’s brightness already detected by ground-based telescopes and the Hubble space instrument. These changes in brightness suggested an object less than 800 meters in its longest dimension. Unable to determine shape, the Spitzer data can only set a limit on the object’s total surface area. Thus the authors plug a spherical shape into their calculations and use three different models to reach their conclusions.

With different inputs for its composition, ‘Oumuamua’s non-detection in the infrared implies a ‘spherical diameter’ ranging from a high of 440 meters to a low of 100 meters. The results are consistent with Micheli and team’s findings on the object’s likely size assuming outgassing. Again, the range is the result of different assumptions about the object’s composition, which is unknown. This JPL news release adds that, weighing infrared findings against optical observations, ‘Oumuamua may be up to 10 times more reflective than comets in our Solar System.

A comet warms as it approaches perihelion, with ice vaporizing and cleansing the surface dust and dirt to expose more reflective ice beneath. As with comets we have observed before, outgassing can also produce a new coating of ice and snow, adding to the object’s albedo after close solar passage. This kind of outgassing could have occurred during perihelion for ‘Oumuamua about five weeks before its discovery. Did we subsequently see a dark surface with millions of years of accumulated dust being swept away by released gases and covered in new snow?