Crater Beneath the Greenland Ice

A crater roughly the size of the area inside Washington DC’s beltway has been found beneath the Greenland ice. On this, some thoughts, but first, a reminiscence. If you’ve ever driven the Capital Beltway at rush hour, you’ll have some sense of the crater’s size. My own experiences of it have been few, but the most memorable was the afternoon I spent at NASA Goddard Space Flight Center, where Greg Benford was speaking. We had agreed that after his talk, Greg and I would head out for dinner at a local restaurant, the exact venue to be determined later.

It was about 5:00 PM when we were in the GSFC parking lot ready to go, now joined by Gloria Lubkin, editor emerita at Physics Today. With the help of Greg’s nephew Dominic, we had chosen a French restaurant about 10 miles away. The problem: Greg and Gloria were in one car, I was in another, and it was rush hour. An out-of-towner who rarely got to DC, I was not remotely prepared for the beltway under these conditions.

I had no smartphone then, no GPS, and the only recourse was to follow the bumper of Gloria’s car. If I lost Gloria and Greg, I wouldn’t have a clue where to go. I leave it as an exercise for the reader’s imagination what it was like to be in packed lanes of high-speed traffic as night fell trying to stay close enough to the bumper ahead so as not to lose it, while simultaneously ensuring enough distance to avoid a collision. Success seemed doubtful, but we reached the restaurant together, and the meal was a gastronomic and conversational delight. 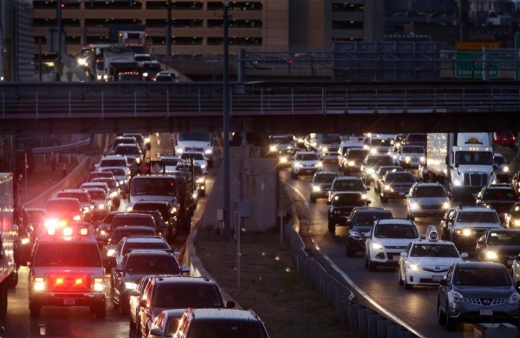 Greenland seems a much tamer place. The crater identified here is about 300 meters (1000 feet) deep and over 30 kilometers (19 miles) in diameter. That puts it among the 25 largest impact craters on our planet. Described in the journal Science Advances, the work was led by scientists from the University of Copenhagen’s Centre for GeoGenetics at the Natural History Museum of Denmark. The data feeding this three-year effort came from NASA.

Specifically, NASA’s Operation IceBridge was in play, an airborne mission to study polar ice using ice-penetrating radar, complemented by earlier NASA airborne missions in Greenland. Located at the edge of the ice sheet in northwestern Greenland, the circular depression under Hiawatha Glacier had never been examined, but clear evidence of its existence could be found in satellite imagery from NASA’s Terra and Aqua satellites, which showed a circular pattern. 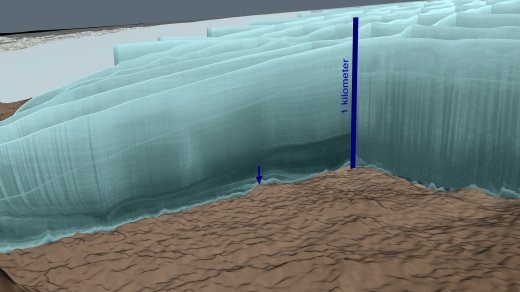 Image: Radar data from an intensive aerial survey of the Hiawatha crater in May 2016 is shown here in aqua-colored curtains. A blue arrow points to the central peak of the crater. Credit: NASA/Cindy Starr.

“Previous radar measurements of Hiawatha Glacier were part of a long-term NASA effort to map Greenland’s changing ice cover. What we really needed to test our hypothesis was a dense and focused radar survey there. The survey exceeded all expectations and imaged the depression in stunning detail: a distinctly circular rim, central uplift, disturbed and undisturbed ice layering, and basal debris — it’s all there.”

You would think that glacial ice would quickly remove all trace of a crater, which is why the crater’s preservation after perhaps three million years is considered so unusual. The impactor was evidently an iron meteorite more than 0,8 kilometers (half a mile) wide. Kurt Kjær (Center for GeoGenetics at the Natural History Museum of Denmark), who is lead author on the study, believes the crater may be even younger, perhaps a remnant of an event that occurred toward the end of the last ice age. That would make it among the youngest craters on Earth. 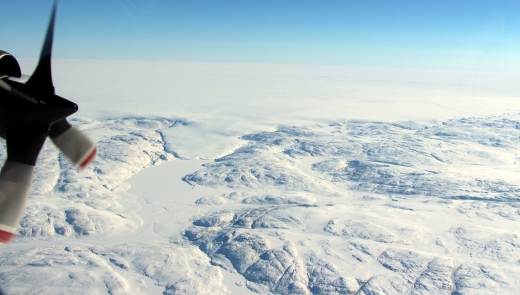 Image: The Hiawatha impact crater is covered by the Greenland Ice Sheet, which flows just beyond the crater rim, forming a semi-circular edge. Part of this edge (top of photo) and a tongue of ice that breaches the crater’s rim are shown in this photo taken during a NASA Operation IceBridge flight on April 17. Credit: NASA/John Sonntag.

The paper goes into considerable detail on the issue of the crater’s age, which remains approximate. Consider this:

The sum of these tentative age constraints suggests that the Hiawatha impact crater formed during the Pleistocene, as this age is most consistent with inferences from presently available data. An impact before the Pleistocene cannot clearly explain the combination of the relative freshness of the crater’s morphology and the ice sheet’s apparently ongoing equilibration with the presence of the crater. We emphasize that even this broad age estimate remains uncertain and that further investigation of the age of the Hiawatha impact crater is necessary. Regardless of its exact age, based on the size of the Hiawatha impact crater, this impact very likely had significant environmental consequences in the Northern Hemisphere and possibly globally.

In 2016 and 2017, researchers returned to Hiawatha Glacier to map tectonic structures and collect samples of sediments emerging from below through a meltwater channel. Here is Nicolaj Larsen (Aarhus University, Denmark), one of the authors of the study:

“Some of the quartz sand coming from the crater had planar deformation features indicative of a violent impact; this is conclusive evidence that the depression beneath the Hiawatha Glacier is a meteorite crater.”

It’s interesting to speculate on other still undiscovered impact craters under ice. They’re a reminder that the Solar System was once a violent place indeed, as the surface of our Moon indicates. There, of course, the processes of wind and water erosion could not take place, so we see stark evidence of ancient impacts. Our planet likewise had its share even if a cursory glance at the globe shows only a few, and the continuing cataloging of near-Earth objects reminds us that a defense against collisions like these is a good insurance policy for our species.