The rate of star formation in our galaxy is about two new stars per year, a sedate pace that may play its role in the emergence of life. A new study out of Australian National University looks at the factors that can slow star formation, particularly in galaxies and star clusters still young enough to contain large amounts of dusty gas. What ANU’s Roland Crocker and colleagues want to determine is an upper limit on how quickly stars can form in any giant gas cloud.

It’s an issue because conditions inside a tightly bound cluster could be inimical to life. Consider RMC 136, a concentration of stars at the heart of the Tarantula Nebula in the Large Magellanic Cloud. Here we have a cluster with an estimated mass of 450,000 solar masses, with a central concentration about 2 parsecs across. Star formation in this tightly crowded part of the cluster NGC 2070 is intense, but the tight quarters might turn out to be a serious issue.

“If star formation happened rapidly, all stars would be bound together in massive clusters, where the intense radiation and supernova explosions would likely sterilise all the planetary systems, preventing the emergence of life,” says Crocker. “The conditions in these massive star clusters would possibly even prevent planets from forming in the first place.” 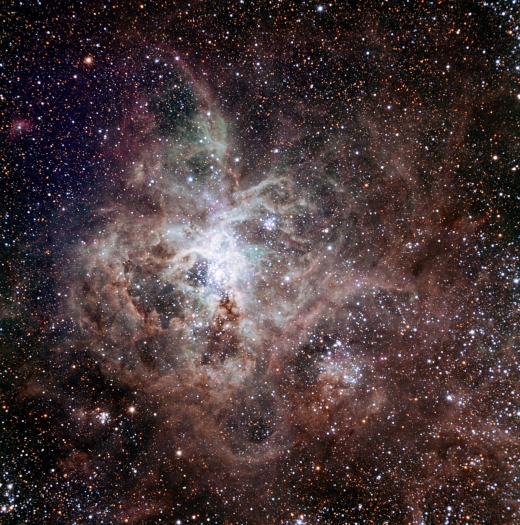 Image: This first light image of the TRAPPIST–South national telescope at La Silla shows the Tarantula Nebula, located in the Large Magellanic Cloud (LMC). This is the most active starburst region known in the Local Group of galaxies. Also known as 30 Doradus or NGC 2070, the nebula owes its name to the arrangement of bright patches that somewhat resembles the legs of a tarantula. Taking the name of one of the biggest spiders on Earth is very fitting in view of the gigantic proportions of this celestial nebula — it measures nearly 1000 light-years across! Its proximity, the favourable inclination of the LMC, and the absence of intervening dust make this nebula one of the best laboratories to help understand the formation of massive stars better. The image was made from data obtained through three filters (B, V and R) and the field of view is about 20 arcminutes across. Credit: TRAPPIST/E. Jehin/ESO.

Dense molecular clouds rich in dust and gas give birth to stars, as clumps collapse through their own gravity and pull in more and more surrounding material, a process that eventually triggers fusion. The ANU team has produced a mechanism for slowing star formation, one that has been studied before but is now mathematically modeled to put limits on the rate of star development.

An important part of the growth of young stars lies in their intense radiation flux, which can drive gas out of nearby space in their cluster. But the paper argues that indirect radiation pressure, which the paper defines as “radiation pressure due to dust-reprocessed photons rather than direct starlight photons,” also plays a role in the dynamics of young clusters.

In other words, dust in the gas from which stars are forming can re-radiate absorbed ultraviolet and optical light at infrared wavelengths. The scattered infrared light acts to slow rather than stop the star-formation process by dissipating nearby star-forming materials. The kinds of effects described here can occur in dense star-forming regions in the Milky Way and other galaxies. What’s new here is the focus on indirect, dust-reprocessed radiation pressure, now factored into the known effects of direct radiation pressure from the stars themselves.

This effect is unlikely to push gas out of clusters in winds, abruptly cutting-off star formation. Rather, systems with sufficiently high initial surface mass densities probably suffer a rather gentle expansion under indirect radiation pressure effects. Only late in their evolution, once they have typically turned well more than 50% of their original gas allocation into stars, will direct radiation pressure effects turn on in such clusters, pushing the remaining gas out of the cluster at greater than the escape speed. This process is complete well before core collapse supernovae start going off in such clusters.

The researchers produce an evolutionary model for dense, protocluster gas-cloud forming stars that tames the potential radiation environment that would emerge in clusters that were too tightly bound. Crocker’s team believes that it takes more than half the material in a molecular cloud to have become stars before direct radiation pressure expels the remaining gas. Calling the combination of indirect and direct radiation pressure a form of ‘feedback,’ the astronomer adds that the twin effects play a clear role in making the conditions for life’s formation possible.