You wouldn’t think the Yarkovsky effect would have any real significance on a half-kilometer wide pile of rubble like the asteroid 101955 Bennu. With a currently estimated mass somewhere between 60 and 80 billion kilograms, Bennu seems unlikely to receive much of a nudge from differences in heat on the object’s surface. But the people who specialize in these things say otherwise. Sunlight warms one side of the asteroid while the other experiences the cold of space. Rotation keeps the dark side radiating heat, accounting for a tiny thrust. 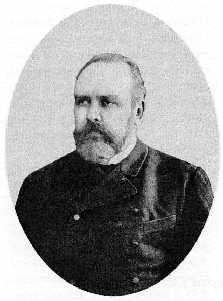 We call it the Yarkovsky effect after Ivan Osipovich Yarkovsky, a Polish engineer who came up with it in 1901, though if we want to give credit across the board, we might refer to the Yarkovsky-O’Keefe-Radzievskii-Paddack (YORP) effect. Here we honor, in addition to Yarkovsky, an American scientist, a Russian astronomer and a NASA aerospace engineer, all of whom played a role in our understanding of the phenomenon as it relates to asteroids.

The YORP effect turns up in interesting places, such as the near-Earth asteroid 2000 PH5, whose rotation rate has been spun up about as fast as any asteroid known, an effect traced over a four-year period by a team led by Stephen Lowry at Queens University Belfast (citation below). When it comes to Bennu, where we now have OSIRIS-REx in active investigation, researchers have calculated that the effect has shifted its orbit about 284 meters per year toward the Sun since 1999. Remember that Bennu originally came our way from the main asteroid belt, a movement inward that was presumably assisted by the same YORP effect.

On a scale of billions of years, then, YORP can create serious movement within the Solar System. But one reason for having OSIRIS-REx on the case is that we need to learn more about how such effects work so we can make better predictions about the future position of asteroids. Will a given asteroid present problems, with a potential trajectory that could intersect with the Earth? The calculation is by no means easy. With YORP alone, so much depends on the nature of the object, and how it absorbs and releases heat. We’d better learn as much as we can about such objects, a need that plays a role in asteroid missions that also investigate the evolution of the Solar System and the ancient debris that circulates among the planets. 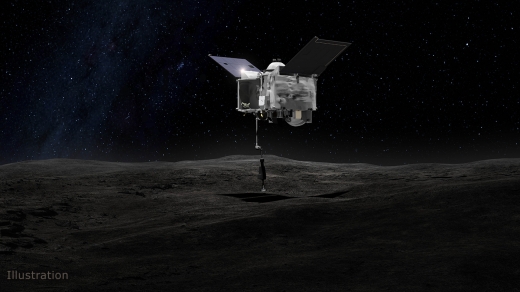 If the YORP effect makes our orbital calculations problematic, so too do the gravitational forces imparted by the Sun, nearby planets and other asteroids. As this JPL news release points out, astronomers can predict the exact dates of the next four passes Bennu will make near our planet (defined here as within 7.5 million kilometers, or .05 AU). The years in question are 2054, 2060, 2080 and 2135. But things get increasingly tricky as we look further out. For each time Bennu comes near the Earth, our planet gives its trajectory another slight twitch.

If you’re trying to figure out where Bennu will be in coming decades, then, you have to take into account the increasingly fuzzy effects that occur with each pass by the Earth, so that by 2060, when another such passage is predicted, we can only say that the asteroid will pass the Earth at about twice the distance from Earth to the Moon. But it could pass any point in a 30 kilometer window of space. Keep magnifying these numbers with future orbits and you can see why firm predictions become so difficult.

By 2080, according to calculations performed by Steven Chesley at the Center for Near-Earth Object Studies (CNEOS) at JPL, the best window we can derive for Bennu’s passage is 14,000 kilometers wide. Switch ahead to 2135, a time when Bennu’s orbit is thought to take it closer than the Moon, and the flyby window reaches 160,000 kilometers. This is, by the way, a projection for the single near-Earth asteroid for which we have the best orbital assessment in our database.

We’ve been studying Bennu through optical, infrared and radio telescopes every six years since its discovery in 1999 to measure factors like shape, rotation rate and trajectory. Given all that, CNEOS can say that looking ahead over the next century, the asteroid has a 99.963 percent change of missing the Earth. That’s heartening, but it’s clear that tightening up our numbers will help. And we can do a lot by way of studying how the YORP effect nudges the asteroid.

“There are a lot of factors that might affect the predictability of Bennu’s trajectory in the future, but most of them are relatively small,” says William Bottke, an asteroid expert at the Southwest Research Institute in Boulder, Colorado, and a participating scientist on the OSIRIS-REx mission. “The one that’s most sizeable is Yarkvovsky.”

Optical images from OSIRIS-REx will help determine Bennu’s precise location and its exact orbital path as of now, giving us a read on how its trajectory is changing with time. With the spacecraft tracking Bennu over a two-year period, the variance from the projected trajectory will help to determine the size of the YORP effect’s changes. We’ll also learn a great deal about the amount of solar heat radiating from the asteroid from what type of surfaces, which will help us refine the YORP numbers, a huge help in tightening the trajectories of other asteroids.

OSIRIS-REx should eventually be able to tell us how craters and boulders change photon scattering and momentum transfer. Says Chesley:

“We know surface roughness is going to affect the Yarkovsky effect; we have models. But the models are speculative. No one has been able to test them.”

Refining models through on the spot observation is a major reason for doing OSIRIS-REx. When the mission is over, the team believes our projections of Bennu’s orbit will be 60 times better than what we now have. If only Ivan Osipovich Yarkovsky could be here to see this.