The science return from OSIRIS-REx has been surprisingly swift as the spacecraft returns data on near-Earth asteroid 101955 Bennu. We’re aided here by the timing, as early results are being discussed at the ongoing conference of the American Geophysical Union (AGU) in Washington, DC. The imagery we’ve received of Bennu’s surface has scientists buzzing. Thus Humberto Campins (University of Central Florida) a member of the OSIRIS-REx Science Team, who notes the comparison between what we see now and the Arecibo radar imagery in the late 1990s:

“The images are spectacular and spot on, what we expected thanks to predictions made with the instrumentation at the Arecibo Observatory in the late 90s and early 2000s. We will spend a year and a half mapping Bennu and have to wait until mid 2020 [when] we collect the sample, but it is pretty amazing to actually see it now. Christmas came early.”

The Arecibo work began shortly after the asteroid’s discovery in 1999, when both the Puerto Rico observatory and the Goldstone planetary radar system were used to examine Bennu. A second Arecibo investigation led to a shape model and pole orientation study published in 2013 by the OSIRIS-REx science team chief, Michael Nolan (University of Arizona). Arecibo’s radar data also firmed up Bennu’s size and rotation period, while even detecting a boulder on the asteroid’s surface. The 2013 model predicted Bennu’s shape, rotation rate, inclination and diameter, all of which have been confirmed by the OSIRIS-REx OCAMS camera suite.

“Radar observations don’t give us any information about colors or brightness of the object, so it is really interesting to see the asteroid up close through the eyes of OSIRIS-REx,” Nolan said. “As we are getting more details, we are figuring out where the craters and boulders are, and we were very pleasantly surprised that virtually every little bump we saw in our radar image back then is actually really there.” 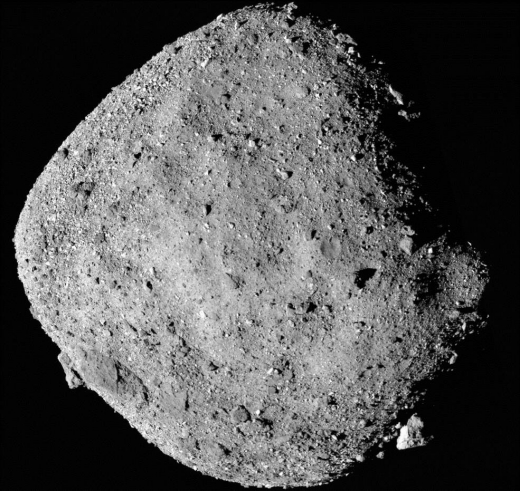 Image: This mosaic image of asteroid Bennu is composed of 12 PolyCam images collected on Dec. 2 by the OSIRIS-REx spacecraft from a range of 24 km (15 miles). Credit: NASA/Goddard/University of Arizona.

But science observations were, of course, occurring long before the arrival at Bennu. During the approach phase, which began in August, OSIRIS-REx turned its two spectrometers, the OSIRIS-REx Visible and Infrared Spectrometer (OVIRS) and the OSIRIS-REx Thermal Emission Spectrometer (OTES), on the target. We learn that the resulting data show the presence of oxygen and hydrogen atoms bonded together as hydroxyls, which researchers believe exist across the entire asteroid in water-bearing clay minerals.

To be sure, Bennu is too small an object to have had water on its surface at any point in its evolution, but at some point, its rocky components must have interacted with water. The implication is that liquid water was present on Bennu’s parent body, a much larger asteroid. What a find for the OSIRIS-REx team, given that the mission was designed to study the volatiles and organics found in the early Solar System through the lens of this asteroid. Rolling the dice on a sample mission here is paying off, as by 2023 we’ll have surface materials in a lab right here on Earth..

“This finding may provide an important link between what we think happened in space with asteroids like Bennu and what we see in the meteorites that scientists study in the lab,” said Ellen Howell, senior research scientist at the UA’s Lunar and Planetary Laboratory, or LPL, and a member of the mission’s spectral analysis group. “It is very exciting to see these hydrated minerals distributed across Bennu’s surface, because it suggests they are an intrinsic part of Bennu’s composition, not just sprinkled on its surface by an impactor.”

The number and variety of boulders on the surface is said to be unexpected, as is the size of the large boulder near the asteroid’s south pole. Observations from the ground pegged its height at 10 meters, but OSIRIS-REx is showing us through OCAMS imagery that it is more like 50 meters tall, with a width of approximately 55 meters. Given the scarcity of smooth surfaces, the search for a suitable sample site may be a complicated one.

With orbital insertion planned for December 31, we have an interesting conjunction for deep space aficionados, as New Horizons will be making its flyby of Kuiper Belt object Ultima Thule later that evening. After the OSIRIS-REx orbit is established, the spacecraft will remain in orbit until February, when it will begin another series of survey flybys. The upcoming orbit, by the way, is interesting in its own right. It will take the spacecraft between 1.4 and 2 kilometers from Bennu’s center, making this the tightest orbit of a space object by any spacecraft.

But before the orbit can be established, mission controllers are working on Bennu’s mass, a vital issue given its effects on the gravitational field of the object. The current preliminary survey passes within 7 kilometers of the north pole, equator and south pole, retrieving data that will also be useful in understanding the internal structure and composition of the asteroid. This mission has plenty of work ahead, but the early results could not be more interesting.