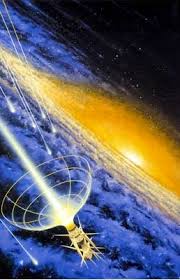 Centauri Dreams posts will unfortunately be sporadic over the next couple of weeks as I attend to some unrelated matters. But I do have several excellent upcoming articles already in the pipeline, including Al Jackson on Apollo 8 at the end of this week. Al, you’ll recall, was involved in Apollo as astronaut trainer on the Lunar Module Simulator, so his thoughts on the program’s extraordinary successes are always a high point.

Ashley Baldwin, who knows the ins and outs of space-based astronomy better than anyone I know, will be looking at the key issues involved, with specific reference not only to WFIRST and HabEX but also a mission called EXCEDE, not currently approved but very likely the progenitor of something like it to come.

In early January, Jim Benford will be talking about beamed propulsion in a two-part article that looks to resolve key particle beam issues, with methods worked out by himself and the ingenious Alan Mole. There are all kinds of advantages to particle beaming but doing it without serious beam divergence is a problem we’ve addressed before. A possible solution emerges.

And, of course, we do have Ultima Thule coming up for New Horizons, on New Year’s Eve, no less. Data return including imagery will take some time, so we’ll be talking about the results throughout January. Emily Lakdawalla’s breakdown of the likely schedule gives an overview of the process.

Let me wish you all the best for the holidays. Here’s hoping for spectacular success for New Horizons along the way. Champagne and a working mission in the Kuiper Belt. What a night!

Next post: The Essence of the Human Spirit: Apollo 8