AI Colonization: The Founder and the Ambassador

As we look toward future space missions using advanced artificial intelligence, when can we expect to have probes with cognitive capabilities similar to humans? Andreas Hein and Stephen Baxter consider the issue in their paper “Artificial Intelligence for Interstellar Travel” (citation below), working out mass estimates for the spacecraft and its subsystems and applying assumptions about the increase in computer power per payload mass. By 2050 we reach onboard data handling systems with a processing power of 15 million DMIPS per kg.

As DMIPS and flops are different performance measures [the computing power of the human brain is estimated at 1020 flops], we use a value for flops per kg from an existing supercomputer (MareNostrum) and extrapolate this value (0.025∗1012 flops/kg) into the future (2050). By 2050, we assume an improvement of computational power by a factor 105 , which yields 0.025∗1017 flops/kg. In order to achieve 1020 flops, a mass of dozens to a hundred tons is needed.

All of this factors into the discussion of what the authors call a ‘generic artificial intelligence probe.’ Including critical systems like solar cells and radiator mass, Hein and Baxter arrive at an AI probe massing on the order of hundreds of tons, which is not far off the value calculated in the 1970s for the Daedalus probe’s payload. Their figures sketch out a probe that will operate close to the target star, maximizing power intake for the artificial intelligence. Radiators are needed to reject the heat generated by the AI payload. The assumption is that AI will be switched off in cruise, there being no power source enroute to support its operations.

The computing payload itself masses 40 tons, with 100 tons for the radiator and 100 tons for solar cells. We can see the overall configuration in the image below, drawn from the paper. 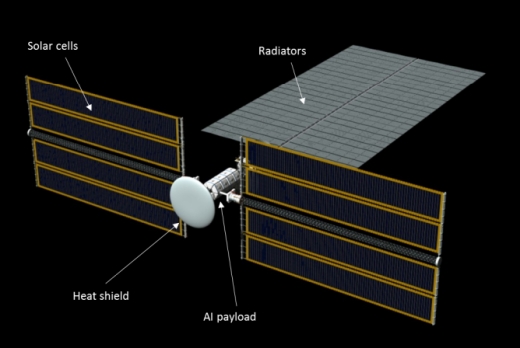 Of course, all this points to increasingly powerful AI and smaller payloads over time. The authors comment:

Under the assumption that during the 2050 to 2090 timeframe, computing power per mass is still increasing by a factor of 20.5, it can be seen…that the payload mass decreases to levels that can be transported by an interstellar spacecraft of the size of the Daedalus probe or smaller from 2050 onwards. If the trend continues till 2090, even modest payload sizes of about 1 kg can be imagined. Such a mission might be subject to the ”waiting paradox”, as the development of the payload might be postponed successively, as long as computing power increases and consequently launch cost[s] decrease due to the lower payload mass.

And this is interesting: Let’s balance the capabilities of an advanced AI payload against the mass needed for transporting a human over interstellar distances (the latter being, in the authors’ estimation, about 100 tons). We reach a breakeven point for the AI probe with the cognitive capabilities of a human somewhere between 2050 and 2060. Of course, a human crew will mean more than a single individual on what would doubtless be a mission of colonization. And the capabilities of AI should continue to increase beyond 2060.

It’s intriguing that our first interstellar missions, perhaps in the form of Breakthrough Starshot’s tiny probes, are contemplated for this timeframe, at the same time that the development of AGI — artificial general intelligence — is extrapolated to occur around 2060. Moving well beyond this century, we can envision increasing miniaturization of increasingly capable AI and AGI, reducing the mass of an interstellar probe carrying such an intelligence to Starshot-sized payloads.

From Daedalus to a nano-probe is a long journey. It’s one that Robert Freitas investigated in a paper that took macro-scale Daedalus probes and folded in the idea of self-replication. He called the concept REPRO, a fusion-based design that would use local resources to produce a new REPRO probe every 500 years. But he would go on to contemplate probes no larger than sewing needles, each imbued with one or many AGIs and capable of using nanotechnology to activate assemblers, exploiting the surface resources of the objects found at destination.

As for Hein and Baxter, their taxonomy of AI probes, which we’ve partially examined this week, goes on to offer two more possibilities. The first is the ‘Founder’ probe, one able to alter its environment and establish human colonies. Thus a new form of human interstellar travel emerges. From the paper:

The classic application of a Founder-class probe may be the ‘seedship’ colony strategy. Crowl et al. [36] gave a recent sketch of possibilities for ‘embryo space colonisation’ (ESC). The purpose is to overcome the bottleneck costs of distance, mass, and energy associated with crewed interstellar voyages. Crowl et al. [36] suggested near-term strategies using frozen embryos, and more advanced options using artificial storage of genetic data and matterprinting of colonists’ bodies, and even ‘pantropy’, the pre-conception adaptation of the human form to local conditions. Hein [70] previously explored the possibility of using AI probes for downloading data from probes into assemblers that could recreate the colonists. Although appearing speculative, Boles et al. [18] have recently demonstrated the production of genetic code from data. 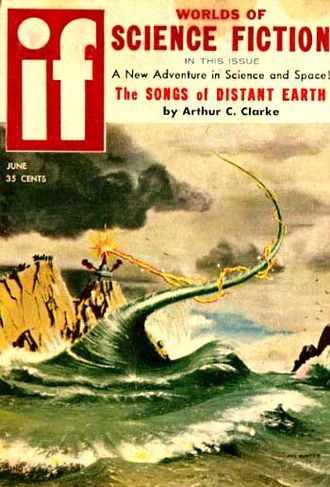 Founder probes demand capable AI indeed, for their job can include terraforming at destination (with all the ethical questions that raises) and the construction of human-ready habitats. You may recall, as the authors do, Arthur C. Clarke’s The Songs of Distant Earth (1986), wherein the Earth-like planet Thalassa is the colony site, and the first generation of colonists are raised by machines. Vernor Vinge imagines in a 1972 story called ‘Long Shot’ a mission carrying 10,000 human embryos, guided by a patient AI named Ilse. A key question for such concepts: Can natural parenting really be supplanted by AI, no matter how sophisticated?

Image: The cover of the June, 1958 issue of IF, featuring “The Songs of Distant Earth.” Science fiction has been exploring the issues raised by AGI for decades.

Taken to its speculative limit, the Founder probe is capable of digital to DNA conversion, which allows stem cells carried aboard the mission to be reprogrammed with DNA printed out from data aboard the probe or supplied from Earth. A new human colony is thus produced.

Image: This is Figure 9 from the paper. Caption: On-site production of genetic material via a data to DNA converter.

Hein and Baxter also explore what they call an ‘Ambassador’ probe. Here we’re in territory that dates back to Ronald Bracewell, who thought that a sufficiently advanced civilization could send out probes that would remain in a target stellar system until activated by its detection of technologies on a nearby planet. A number of advantages emerge when contrasted with the idea of long-range communications between stars:

A local probe would allow rapid dialogue, compared to an exchange of EM signals which might last millennia. The probe might even be able to contact cultures lacking advanced technology, through recognizing surface structures for example [11]. And if technological cultures are short-lived, a probe, if robust enough, can simply wait at a target star for a culture ready for contact to emerge – like the Monoliths of Clarke’s 2001 [32]. In Bracewell’s model, the probe would need to be capable of distinguishing between local signal types, interpreting incoming data, and of achieving dialogue in local languages in printed form – perhaps through the use of an animated dictionary mediated by television exchanges. In terms of message content, perhaps it would discuss advances in science and mathematics with us, or ‘write poetry or discuss philosophy’…

Are we in ‘Prime Directive’ territory here? Obviously we do not want to harm the local culture; there are planetary protection protocols to consider, and issues we’ve looked at before in terms of METI — Messaging Extraterrestrial Intelligence. The need for complex policy discussion before such probes could ever be launched is obvious. Clarke’s ‘Starglider’ probe (from The Fountains of Paradise) comes to mind, a visitor from another system that uses language skills acquired by radio leakage to begin exchanging information with humans.

Having run through their taxonomy, Hein and Baxter’s concept for a generic artificial intelligence probe, discussed earlier, assumes that future human-level AGI would consume as much energy for operations as the equivalent energy for simulating a human brain. Heat rejection turns out to be a major issue, as it is for supercomputers today, requiring the large radiators of the generic design. Protection from galactic cosmic rays during cruise, radiation-hardened electronics and self-healing technologies in hardware and software are a given for interstellar missions.

Frank Tipler, among others, has looked into the possibility of mind-uploading, which could theoretically take human intelligence along for the ride to the stars and, given the lack of biological crew, propel the colonization of the galaxy. Ray Kurzweil has gone even further,by suggesting that nano-probes of the Freitas variety might traverse wormholes for journeys across the universe. Such ideas are mind-bending (plenty of science fiction plots here), but it’s clear that given the length of the journeys we contemplate, finding non-biological agents to perform such missions will continue to occupy researchers at the boundaries of computation.

Next post: In Wildness is the Preservation of the World: ‘Silent Running’ and Our Choice of Futures

Previous post: Future AI: The Explorer and the Philosopher