Refining the Shape of the Milky Way

Figuring out the shape of things — where to place what we see in the sky in a 3-D representation — has always been challenging. We’re looking out at a disk of stars from well within it, and it wasn’t until the 1920s and the work of Edwin Hubble that we began to see there were other such disks, not nebulae at all but galaxies in their own right, some bigger than ours. Interestingly, Immanuel Kant had speculated about this as far back as 1755.

About our own galaxy, we still have much to learn, as I am once again reminded by a paper by authors from Macquarie University (Australia) and the Chinese Academy of Sciences. The Milky Way turns out to be not as flat as many depictions would have us believe. In fact, our galaxy shows distinct signs of warping, a spiral pattern that appears to be the result of torque produced by the Milky Way’s massive inner disk of closely packed stars.

In the outer regions of the galaxy’s neutral hydrogen disk, the warp becomes readily apparent. We wind up with a shape something like the one in this artist’s impression below: 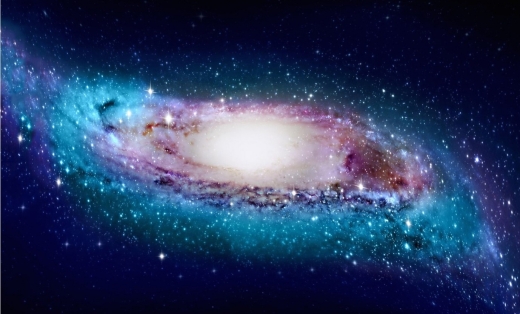 The twisted spiral pattern is hardly unique to the Milky Way. In fact, about a dozen other galaxies are known to display such patterns. 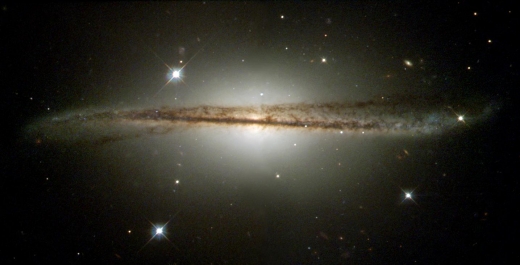 Demonstrating a spiral pattern from within the galaxy under study is not easy, says lead author Xiaodian Chen (Chinese Academy of Sciences, Beijing):

“It is notoriously difficult to determine distances from the Sun to parts of the Milky Way’s outer gas disc without having a clear idea of what that disc actually looks like. However, we recently published a new catalogue of well-behaved variable stars known as classical Cepheids, for which very accurate distances can be determined with an error of only three to five per cent.”

Using Cepheid variables found in data from the Wide-field Infrared Survey Explorer (WISE) mission as well as a variety of optical surveys, the researchers set about producing a three-dimensional picture of the galaxy out to its farthest regions. Cepheid variables are helpful here because they vary in brightness, and their luminosity and pulsation period are directly linked. Observing a Cepheid variable’s pulsation period allows one to know its true luminosity. The distance to the star can then be calculated by comparing known luminosity to the brightness astronomers observe (hence the nickname ‘standard candles’ to describe such stars).

What the scientists found was that the 1339 Cepheids tracked the neutral hydrogen disk of the Milky Way, with an S-like spiral pattern apparent in each as we move toward the galaxy’s outer regions. From the paper:

…we establish a robust Galactic Disk model based on 1,339 classical Cepheids. We provide strong evidence that the warp’s line of nodes is not oriented in the Galactic Centre–Sun direction. Instead, it subtends a mean angle of 17.5° ± 1° (formal) ± 3° (systematic) and exhibits a leading spiral pattern. Our Galaxy thus follows Briggs’ rule for spiral galaxies, which suggests that the origin of the warp is associated with torques forced by the massive inner disk . The stellar disk traced by Cepheids follows the gas disk in terms of their amplitudes; the stellar disk extends to at least 20 kpc… This morphology provides a crucial, updated map for studies of the kinematics and archaeology of the Galactic Disk. 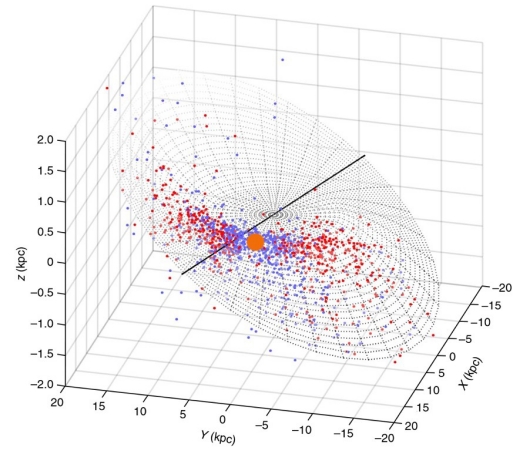 Image: The units ‘kpc’ (kiloparsecs) along the image’s three axes are used by astronomers to indicate distances on galaxy-wide scales. One kiloparsec is equivalent to about 3,262 light years. Credit: Chen et al.

The paper is Chen et al., “An intuitive 3D map of the Galactic warp’s precession traced by classical Cepheids,” Nature Astronomy 04 February 2019 (abstract). Thanks to Alex Tolley for useful information on this work.