Recently we’ve talked about ‘standard candles,’ these being understood as objects in the sky about which we know the total luminosity because of some innate characteristic. Thus the Type 1a supernova, produced in a binary star system as material from a red giant falls onto a white dwarf, causing the smaller star to reach a mass limit and explode. These explosions reach roughly the same peak brightness, allowing astronomers to calculate their distance.

Even better known are Cepheid variables, stars whose luminosity and variable pulsation period are linked, so we can measure the pulsation and know the true luminosity. This in turn lets us calculate the distance to the star by comparing what we see against the known true luminosity.

This is helpful stuff, and Edwin Hubble used Cepheids in making the calculations that helped him figure out the distance between the Milky Way and Andromeda, which in turn put us on the road to understanding that Andromeda was not a nebula but a galaxy. Hubble’s early distance estimates were low, but we now know that Andromeda is 2.5 million light years away.

I love distance comparisons and just ran across this one in Richard Gott’s The Cosmic Web: “If our galaxy were the size of a standard dinner plate (10 inches across), the Andromeda Galaxy (M31) would be another dinner plate 21 feet away.”

Galaxies of hundreds of billions of stars each, reduced to the size of dinner plates and a scant 21 feet apart… Hubble would go on to study galactic redshifts enroute to determining that the universe is expanding. He would produce the Hubble Constant as a measure of the rate of expansion, and that controversial figure takes us into the realm of today’s article.

For we’re moving into the exciting world of gravitational wave astronomy, and a paper in Physical Review Letters now tells us that a new standard candle is emerging. Using it, we may be able to refine the value of the Hubble Constant (H0), the present rate of expansion of the cosmos. This would be helpful indeed because right now, the value of the constant is not absolutely pinned down. Hubble’s initial take was on the high side, and controversy has continued as different methodologies yield different values for H0.

Hiranya Peiris (University College London) is a co-author on the paper on this work:

“The Hubble Constant is one of the most important numbers in cosmology because it is essential for estimating the curvature of space and the age of the universe, as well as exploring its fate.

“We can measure the Hubble Constant by using two methods – one observing Cepheid stars and supernovae in the local universe, and a second using measurements of cosmic background radiation from the early universe – but these methods don’t give the same values, which means our standard cosmological model might be flawed.” 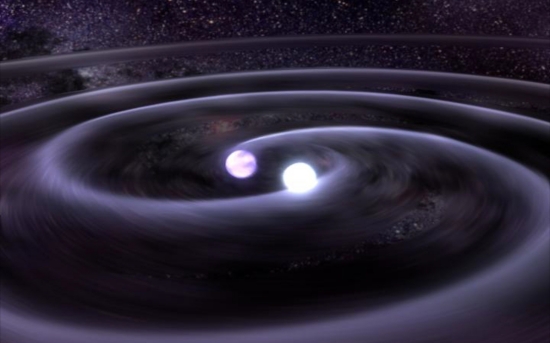 We’re closing on a refined Hubble’s Constant, and researchers on the case, led by Stephen Feeney (Center for Computational Astrophysics at the Flatiron Institute, NY) think that observations of no more than 50 binary neutron stars should produce sufficient data to pin down H0. We’ll then have an independent measurement of this critical figure. And, says Feeney, “[w]e should be able to detect enough mergers to answer this question within 5-10 years.”

Nailing down the Hubble Constant will refine our estimates of the curvature of space and the age of the universe. Just a few years ago, who would have thought we’d be doing this by using neutron star interactions as what the researchers are now delightfully calling ‘standard sirens,’ allowing measurements that should solve the H0 discrepancy once and for all.

A final impulse takes me back to Hubble himself. The man had a bit of the poet in him, as witness his own outside perspective of our galaxy: “Our stellar system is a swarm of stars isolated in space. It drifts through the universe as a swarm of bees drifts through the summer air.” Found in The Realm of the Nebulae (1936).