One of the interesting things about gravitational assists is their ability to accelerate massive objects up to high speeds, provided of course that the astrophysical object being used for the assist is moving at high speeds itself. Freeman Dyson realized, as we saw yesterday, that a pair of tightly rotating white dwarfs could offer such an opportunity, while a binary neutron star carried even more clout. When Dyson was writing his “Gravitational Machines” paper, neutron stars were still a theoretical concept, so he primarily focused the paper on white dwarfs.

Get two neutron stars in a tight enough orbit and the speeds they achieve would make it possible to accelerate a spacecraft making a gravity assist up to a substantial percentage of lightspeed. But what an adventure that close pass would be — the tidal forces would be extreme. I don’t recall seeing a neutron star propulsive flyby portrayed in science fiction (help me out here), though Gregory Benford offers a variant on the white dwarf idea in his early work Deeper than the Darkness (1970, later re-done as The Stars in Shroud, which ran in Galaxy in 1978), where a neutron star and an F-class star comprise a system he calls a ‘Flinger,’ with potential uses both for acceleration and deceleration.

David Kipping’s thoughts on extending Dyson to black holes were partially triggered by a fascinating paper from William Stuckey in 1993 entitled “The Schwarzschild Black Hole as a Gravitational Mirror” (citation below). The gravitational mirror in the title is what happens when photons skim near the event horizon and return to the source, a photon ‘boomerang’ that gains propulsive impact because the returning light rays receive a blueshift thanks to the black hole’s relative motion. 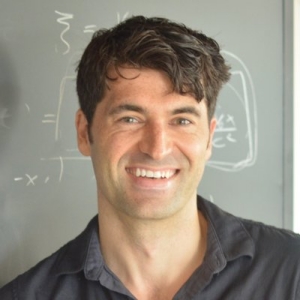 Thus the Kipping concept: Use laser beaming technologies to beam toward a precisely targeted member of a black hole binary. The light is returned in blue-shifted form to the spacecraft, the extra energy being used to push the craft. What’s especially intriguing here is that in this scenario, it is not the spacecraft that is making the messy plunge between two rapidly moving, tightly orbiting black holes, but rather the photon beam that is used for propulsion.

It is the light beam that gets the gravitational assist as photons are re-emitted and re-absorbed, for as the paper puts it, “…the halo drive transfers kinetic energy from the moving black hole to the spacecraft by way of a gravitational assist.” A less harrowing experience for any crew, to be sure, and one in which extreme time dilation can be avoided, not to mention the dangers of tidal disruption and radiation referred to above.

Kipping described the idea to me in an email recently:

The idea is to essentially to perform a Dyson slingshot remotely, by firing a collimated particle/energy beam just to the side of the event horizon of a Schwarzchild black hole. If you choose the angle carefully, the beam loops around (like a halo) and comes back to you. If the black hole is moving towards you (I envisaged a compact binary like Dyson), then the beam returns blue shifted. When you initially fire the beam, your ship receives a small momentum kick and when the beam returns and strikes your ship you get another. This is how the ship is propelled, much like a light sail. But the beam actually returns with more energy than it departed, since it siphoned some of the kinetic energy from the black hole. So not only did you accelerate, but your ship actually gained stored energy.

Do this right and the speed of your spacecraft eventually matches that of the black hole, but the cumulative blue shifts allow the craft to continue firing the laser past that point. No new ‘free’ energy is gained but energy from the stored cells aboard the craft can keep the acceleration going up to, the author calculates, 4/3 the speed of the black hole. It’s interesting to note that we are not limited to small masses in such a calculation. Unlike the Breakthrough Starshot energy issue we discussed yesterday, we can drive arbitrarily large masses up to potentially relativistic speeds. All of this by exploiting the fantastic energies available through astrophysical objects. 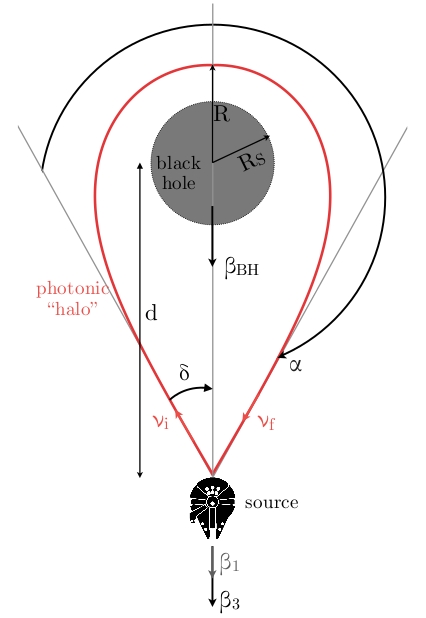 Image: This is Figure 1 from the paper. Caption: Figure 1. Outline of the halo drive. A spaceship traveling at a velocity βi emits a photon of frequency νi at a specific angle δ such that the photon completes a halo around the black hole, returning shifted to νf due to the forward motion of the black hole, βBH. Credit: David Kipping.

As you would imagine, for the gravitational mirror to function in this way, the beam must be precisely oriented. From the paper:

In order for the deflection to be strong enough to constitute a boomerang, this requires the light’s closest approach to the black hole to be within a couple of Schwarzschild radii, RS ≡ 2GM/c2. Light which makes a closest approach smaller than 3GM/c2 becomes trapped in orbit, known as the photon sphere, and thus typical boomerang geodesics skim just above this critical distance [italics mine].

Kipping calls this a ‘halo drive’ because the photons returning to the craft appear as a halo around the black hole. Single black holes as well as binaries can be used (and evidently Kerr black holes as well as Schwarschild black holes, though the author plans future work on this), but the paper notes that the potential for tight configurations at relativistic speeds makes binaries preferable. 10 million binary black holes are thought to exist in the galaxy [I’ve seen this figure reduced to 1 million recently — clearly, the issue is still open], raising the possibility of a network of starship acceleration points or, for that matter, deceleration stations.

A range of possible uses for binary black holes emerges, as the paper notes:

Although not the focus of this work, it is worth highlighting that halo drives could have other purposes besides just accelerating spacecraft. For example, the back reaction on the black hole taps energy from it, essentially mining the gravitational binding energy of the binary. Similarly, forward reactions could be used to not only decelerate incoming spacecraft but effectively store energy in the binary like a fly-wheel, turning the binary into a cosmic battery.

Another possibility is that the halos could be used to deliberately manipulate black holes into specific configurations, analogous to optical tweezers. This could be particularly effective if halo bridges are established between nearby pairs of binaries, causing one binary to excite the other. Such cases could lead to rapid transformation of binary orbits, including the deliberate liberation of a binary.

A natural question is why an interstellar civilization, one already capable of reaching a black hole binary and manipulating it in this manner would need to establish a galactic network of transit points. A possible answer is that the amount of energy liberated from such a black hole binary is, as with other kinds of gravitational assist, arriving essentially ‘free’ at the spacecraft. Thus a transportation network on the cheap could be established between specific locations, a mechanism for cost-savings that may well be too efficient to ignore.

Freeman Dyson’s interest in using astrophysical objects for propulsion included, of course, his abiding fascination with the technosignatures of advanced civilizations. Would a galactic infrastructure at work in the galaxy exhibit evidence of its use to distant astronomers? In my next post, I’ll look into the possibility.