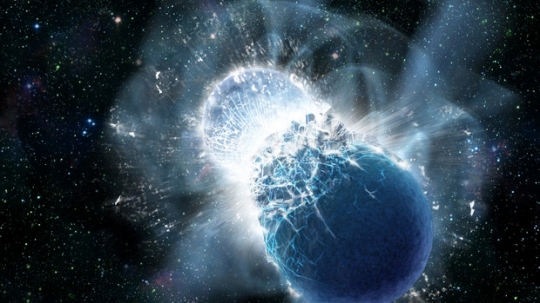 Observables of this kind, if we could figure out how to do it (and we subsequently have) fascinated Dyson, who was in this era (early 1960s) working out his ideas on Dyson spheres and the capabilities of advanced civilizations. As to the problematic merger of neutron stars in a ‘machine,’ he naturally wondered whether astrophysical evidence of manipulations of these would flag the presence of such cultures, noting that “…it would be surprising if a technologically advanced species could not find a way to design a nonradiating gravitational machine, and so to exploit the much higher velocities which neutron stars in principle make possible.”

He goes on in the conclusion to the “Gravitational Engines” paper to say this: “In any search for evidences of technologically advanced societies in the universe, an investigation of anomalously intense sources of gravitational radiation ought to be included.”

Searching for unusual astrophysical activity is part of what would emerge as ‘Dysonian SETI,’ or in our current parlance, the search for ‘technosignatures.’ It’s no surprise that since he discusses using binary black holes as the venue for his laser-based gravity assist, David Kipping should also be thinking along these lines. If the number of black holes in the galaxy were large enough to support a network of transportation hubs using binary black holes, what would be the telltale sign of its presence? Or would it be observable in the first place?

Remember the methodology: A spacecraft emits a beam of energy at a black hole that is moving towards it, choosing the angles so that the beam returns to the spacecraft (along the so-called ‘boomerang geodesic’). With the beam making the gravitational flyby rather than the spacecraft, the vehicle can nonetheless exploit the kinetic energy of the black hole for acceleration. Huge objects up to planetary size could be accelerated in such a way, assuming their mass is far smaller than the mass of the black hole. No fuel is spent aboard the spacecraft which, using stored energy from the beam, continues to accelerate up to terminal velocity.

Kipping likes to talk about the process in terms of a mirror. Because light loops around the approaching black hole and returns to the spacecraft, the black hole exhibits mirror-like behavior. Thus on Earth, if we bounce a ping-pong ball off a mirror, the ball returns to us. But if the mirror is moving towards us quickly, the ball returns faster because it has picked up momentum from the mirror. Light acts the same way, but light cannot return faster than the speed of light. Instead, in gaining momentum from the black hole, the light blueshifts.

We exploit the gain in energy, and we can envision a sufficiently advanced civilization doing the same. If it can reach a black hole binary, it has gained an essentially free source of energy for continued operations in moving objects to relativistic speeds. Operations like these at a black hole binary result in certain effects, so there is a whisper of an observable technosignature.

I discussed the question with Kipping in a recent email exchange. One problem emerges at the outset, for as he writes: “The halo drive is a very efficient system by design and that’s bad news for technosignatures: there’s zero leakage with an idealized system.” But he goes on:

The major effect I considered in the paper is the impact on the black hole binary itself. During departure, one is stealing energy from the black binary, which causes the separation between the two dead stars to shrink slightly via the loss of gravitational potential energy. However, an arriving ship would cancel out this effect by depositing approximately the same energy back into the system during a deceleration maneuver. Despite this averaging effect, there is presumably some time delay between departures and arrivals, and during this interval the black hole binary is forced into a temporarily contracted state. Since the rate of binary merger via gravitational radiation is very sensitive to the binary separation, these short intervals will experience enhanced infall rates. And thus, overall, the binary will merge faster than one should expect naturally. It may be possible to thus search for elevated merger rates than that expected to occur naturally. In addition, if the highway system is not isotropic, certain directions are preferred over others, then the binary will be forced into an eccentric orbit which may also lead to an observational signature.

Tricky business, this, for a black hole binary in this formulation can be used not only for acceleration but deceleration. The latter potentially undoes the distortions caused by the former, though Kipping believes elevated merger rates between the binary pair will persist. Our technosignature, then, could be an elevated binary merger rate and excess binary eccentricity.

I was also interested in directionality — was the spacecraft limited in where it could go? I learned that the halo drive would be most effective when moving in a direction that lies along the plane of the binary orbit. Traveling out of this plane is possible, though it would involve using onboard propellant to attain the correct trajectory. The potential of reaching the speed of the black hole itself remains, but excess stored energy would then need to be applied to an onboard thruster to make the course adjustment. Kipping says he has not run the numbers on this yet, but from the work so far be believes that a spacecraft could work with angles as high as 20 degrees out of the plane of the binary orbit and still reach an acceleration equal to that of the black hole.

For more on the halo drive, remember that Kipping has made available a video that you can access here. The other citations are Kipping, “The Halo Drive: Fuel-free Relativistic Propulsion of Large Masses via Recycled Boomerang Photons,” accepted at the Journal of the British Interplanetary Society (preprint); and Dyson, “Gravitational Machines,” in A.G.W. Cameron, ed., Interstellar Communication, New York: Benjamin Press, 1963, Chapter 12.

Next post: Confirming Kepler-1658b: Tight Orbit around an Evolved Star