Asteroids in Collision: A New Model

If we were to find an asteroid on a trajectory to impact the Earth, what strategies would we use to stop it? Recent work from Johns Hopkins University shows that there is a wide range in our thinking on what happens to asteroids under various mitigation scenarios. Much depends, of course, on the asteroid’s composition, which we must account for in our models. A good thing, then, that we are supplementing those models with sampling missions like OSIRIS-REx and Hayabusa-2.

Let’s look at the JHU work, though, which updates earlier results from Patrick Michel and colleagues, reported in a 2013 paper; the latter had considered the 5 km/s head-on impact of a 1.21 km diameter basalt impactor on a 25 km diameter target asteroid, with a model varying mass, temperature and material brittleness. Michel’s work showed evidence that the asteroid being targeted would be completely destroyed by the impactor. What Charles El Mir and colleagues at Johns Hopkins have been able to show is that other outcomes are likely.

“We used to believe that the larger the object, the more easily it would break, because bigger objects are more likely to have flaws,” says El Mir. “Our findings, however, show that asteroids are stronger than we used to think and require more energy to be completely shattered.”

Using essentially the same scenario as Michel, El Mir, K. T. Ramesh (JHU) and Derek Richardson (University of Maryland) have created a new model that offers a more detailed look at the smaller-scale processes that take place during such a collision. “Our question was, how much energy does it take to actually destroy an asteroid and break it into pieces?” adds El Mir.

Discussing methods, the authors note their model’s calculation of the first tens of seconds following impact, with transition to computer code integrating longer-term effects. From the paper:

The multi-physics material model is centered around the growth mechanism of an initial distribution of subscale flaws. Rate effects in the model are a natural outcome of the limited crack growth speed, which is explicitly computed based on the local stress state. In addition, porosity growth, pore compaction, and granular flow of highly damaged materials are captured at the material-point level. We validated the model’s predictive capability by comparing the dynamic tensile strength with high-strain-rate Brazilian disk experiments performed on basalt samples. 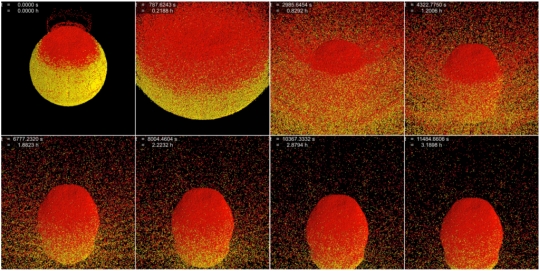 The first phase of the scenario is shown in the video below, available at https://www.youtube.com/watch?time_continue=1&v=Vt_xwQYafOY for email subscribers who would like to follow it up in their browsers. What emerges is that millions of cracks form in the asteroid as the crater is created, with the asteroid surviving the hit rather than being shattered, while the surviving core then has sufficient gravitational pull to act on the fragments swirling around it.

In the second phase, available at https://www.youtube.com/watch?time_continue=1&v=ZjBgljnCtWk, what we have left is not a rubble pile held loosely by gravity, but rather a surviving core whose fragments have been redistributed. Can we, then, hope to break an asteroid into small pieces, or is it best to find ways to nudge the entire object onto a new trajectory? The latter still involves the question of asteroid survivability, as we need to move it without breaking it into smaller impactors.

The paper shows the capability of the parent asteroid to withstand huge shock:

The collision imparted substantial damage onto the target, with most of the damage localized under the impact site, resulting in a heavily fractured but not fully damaged “core”. The material points were then converted into soft spheres and handed over to pkdgrav [the modeling software] in a self-consistent manner to calculate the gravitational interaction of the ejected material. We observed substantial ejecta fallback onto the largest remnant of the parent body, with a recovered mass of the largest remnant being 0.85 that of the parent body, indicating that the disruption thresholds for such targets may be higher than previously thought.

Thinking ahead to asteroid mitigation strategies is simple prudence, and requires continuing study of how asteroids respond to the various methods now under consideration to destroy them or change their trajectory. This paper gives us a glimpse of the changing parameters of research on the matter, a window into the ongoing analysis that will refine our planning.