Working with the Unexpected at Asteroid Bennu

We know by now to expect surprises when we do something for the first time with a spacecraft. The latest case in point is OSIRIS-REx, which has revealed multiple unexpected facets of the asteroid Bennu, near which it has been operating since December. Consider the surface of the asteroid, a key factor in how the mission goes forward since this is a sample return mission, and that involves finding a place relatively free of surface debris from which to take the sample.

The problem: This smallest body ever to be orbited by a spacecraft turns out to be strewn with boulders. The original sample collection plan — christened Touch-and-Go (TAG) — will have to be altered, for it was dependent on a sample site with a 25-meter radius free of hazards. The OSIRIS-REx team has been unable to identify any site that meets those requirements. A new type of candidate site will have to be found, demanding higher performance using an updated sampling approach called Bullseye TAG that will be tailored for smaller sample zones.

“Throughout OSIRIS-REx’s operations near Bennu, our spacecraft and operations team have demonstrated that we can achieve system performance that beats design requirements,” said Rich Burns, the project manager of OSIRIS-REx at NASA’s Goddard Space Flight Center in Greenbelt, Maryland. “Bennu has issued us a challenge to deal with its rugged terrain, and we are confident that OSIRIS-REx is up to the task.” 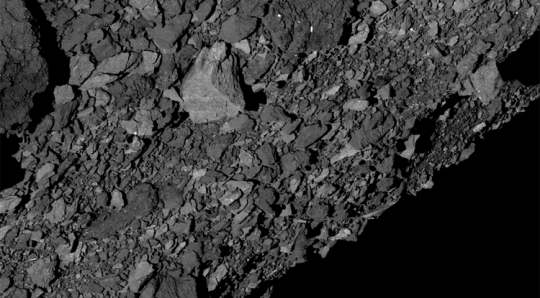 Image: Bennu’s surface is rockier than expected, creating challenges for the team whose mission is to scoop up a sample of pristine material and return it to Earth in 2023. Credit: NASA/Goddard/UA.

The larger issue facing asteroid investigations is the question of computer modeling. The reason scientists have assumed that Bennu’s surface would be generally smooth is that observations from Earth of the object’s thermal inertia and radar measurements of its surface roughness have been integrated into computer models that made this prediction. We now learn that the interpretation of these models was not correct. Indeed, data from Bennu should help us refine such models to better predict what we’ll find on the rocky surfaces of small asteroids.

A suite of papers covering the Bennu findings has appeared in Nature following presentations at the recent 50th Lunar and Planetary Conference in Houston (citations below). On the matter of Bennu’s boulder strewn surface, a team from SwRI presents results showing that the surface geology of the asteroid is between 100 million and 1 billion years old. That too can be considered a surprise, to judge from the remarks of SwRI’s Kevin Walsh:

“We expected small, kilometer-sized NEAs to have young, frequently refreshed surfaces,” said SwRI’s Dr. Kevin Walsh, a mission co-investigator and lead author of a paper outlining the discovery published March 19 in Nature Geoscience. “However, numerous large impact craters as well as very large, fractured boulders scattered across Bennu’s surface look ancient. We also see signs of some resurfacing taking place, indicating that the NEA retains very old features on its surface while still having some dynamic processes at play.”

Some of Bennu’s boulders are larger than 45 meters (150 feet) in size, much larger than earlier observations had predicted, and according to Walsh, they are simply too big to be the result of cratering. Instead, the scientist believes they date back to the formation of the asteroid.

But OSIRIS-REx (Origins, Spectral Interpretation, Resource Identification, Security-Regolith Explorer — I have to untangle the acronym once in each post on the mission) continues to seize our attention long before the sample return with the news that particle plumes are erupting from its surface. This one caught everyone by surprise as well when, on January 6, the science team discovered the plumes while the spacecraft was about 1.6 kilometers away, with further detections in the ensuing months. Some of these particles were ejected from Bennu entirely, while others returned to the asteroid. None are thought to pose a danger to the spacecraft.

“The discovery of plumes is one of the biggest surprises of my scientific career,” said Dante Lauretta, OSIRIS-REx principal investigator at the University of Arizona, Tucson. “And the rugged terrain went against all of our predictions. Bennu is already surprising us, and our exciting journey there is just getting started.” 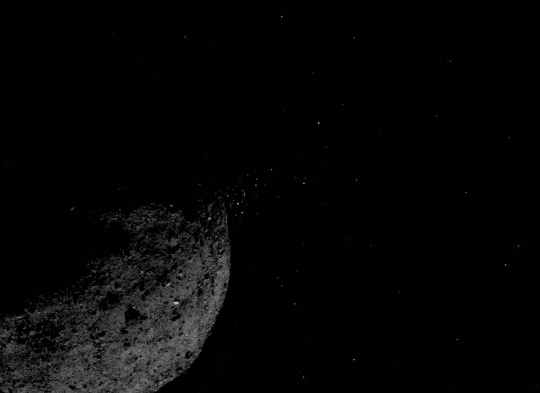 Image: This view of asteroid Bennu ejecting particles from its surface on January 19 was created by combining two images taken on board NASA’s OSIRIS-REx spacecraft. Other image processing techniques were also applied, such as cropping and adjusting the brightness and contrast of each image. Credit: NASA/Goddard/University of Arizona/Lockheed Martin.

We’ve already talked about the change in Bennu’s spin rate as an apparent result of the Yarkovsky-O’Keefe-Radzievskii-Paddack (YORP) effect (see Asteroid Bennu: Changes in Rotation Rate), a fascinating find in itself, but it’s also encouraging in terms of understanding asteroid composition to learn that the MapCam color imager and the OSIRIS-REx Thermal Emission Spectrometer (OTES) have detected magnetite on Bennu’s surface, which points to rock and liquid water interactions on the asteroid’s much larger parent body.

Learning about the sources of organic molecules and water on Earth may be enhanced by our analysis of such asteroids, and we’re also beginning to learn what resources will be available in near-Earth space. Bennu truly offers us a window into the early days of the Solar System.