Because I’ve been re-reading Gregory Benford’s Galactic Center sequence (now into Furious Gulf), I want to quickly mention the galactic center simulation available here, which offers a 360-degree, ultra-high-definition view based on Chandra X-ray observations as massaged by NASA supercomputers. It’s lively stuff, showing “the effects of dozens of massive stellar giants with fierce winds blowing off their surfaces in the region a few light years away from the supermassive black hole known as Sagittarius A* (Sgr A* for short).” Just remember Greg got there first. But back to the probe question we’ve been examining. Jim Benford’s take on a SETI search for ‘lurkers,’ probes that fit into the Bracewell category, examines targets known as Earth co-orbitals, as we saw on Friday. UCI physicist Greg Benford’s comments about his brother’s article examine the question of what the presence of such a probe in our system might imply. The possible scenarios take us into the realm of what Greg has called ‘deep time.’ 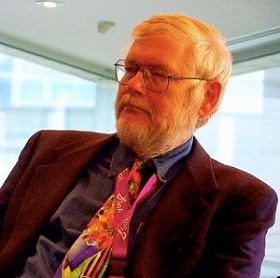 Consider time scales. Some tech society within a few hundred light years may have sent a Lurker which remains operating now. But our routine radio signals are only a bit more than a century old. If a Lurker reports back to its origin, it may well have not gotten an answer yet about how to proceed.

This means we should consider searches over decades-long time scales. In any case, we can carry out interrogations by radar and consider missions to orbit nearby targets and survey for Lurker sites, which may have gone dead in the distant past, or be intermittently active now.

We humans measure our eras in millennia at most. Within a century or so we may plausibly have made computer minds that could manage a Lurker that voyages for centuries and watches a biologically active world for more millennia still. If societies can persist for very long times, they will have alien artificial intelligences.

If ETI dispatches Lurkers here, these may report back any attempt at contact but do no more. Or Lurkers may be free to respond, if they were instructed so by their home society (or societies) earlier. Or further still, Lurkers from the far past may have done their duty and slowly failed, finally, into their own demise.

On scales of millennia, the ruins of Lurker installations, including mining for resources on nearby orbiting sites, may be visible, even though their animating intelligences are long gone. Surveying, exploring satellites could see these ruins and learn much from them. Thus a lack of response to our pings and messages may simply imply a needed further study through exploring probes.

This implies a staging of research. At each level, we disprove a hypothesis. Moving on in this way will disallow models of alien societies ranging through ever-larger distances, and ever longer past eras. This program can go forward for decades, as our capabilities grow. Our understanding of the near-orbital objects will grow as well, giving us a gamut of possibilities we can imagine and then test.

These minds must be made for social species; otherwise it seems unlikely that loner species like our carnivores will care much for speaking to distant others, a point made by E.O. Wilson. As Wittgenstein said, “If a lion could speak, we could not understand him.”

Translation would be unlikely if an ET mind were a single integrated intelligence, without social species drives; yet a Lurker may well be that. As well, a Lurker may be thrifty in energy use. If it came here using a nuclear drive or energy source, it would have to mine for radioactives to keep itself running—or erect large solar panels. (This is another reason to lurk near Earth: higher solar flux.) It may well be an occasional watchman, not continuous. Or it may have a small alert system to summon the larger intelligence when certain events or symptoms occur—such as a hail from Earth that repeats and contains self-explaining images that convey interest, such as a picture of the Lurker itself seen from afar. All these possibilities speak for a repeating observation and hailing pattern. This should be a long game, over years at least.