Unusual Lightcurve of a ‘What Is This’ Star

VISTA (Visible and Infrared Survey Telescope for Astronomy) is a near-infrared instrument located at the European Southern Observatory’s Paranal site, and is by all accounts the world’s largest survey telescope, with extremely wide field of view and sensitive detectors. On the peak next to ESO’s Very Large Telescope (VLT), VISTA shares its exceptional viewing conditions using a 4.1-meter primary mirror and a three-tonne camera with 16 infrared detectors.

With its time devoted to six surveys ranging from complete southern sky coverage to small patches of sky looking for extremely faint objects, VISTA was bound to come up with interesting data, especially in the survey known as VVV, which stands for VISTA Variables in Via Láctea. Here, astronomers are homing in on regions that are obscured by dust in the bulge and southern Galactic disk, using pulsating RR Lyrae and Cepheid variables as distance indicators, with a focus on microlensing events, eclipsing binaries and pre-main sequence variable stars. 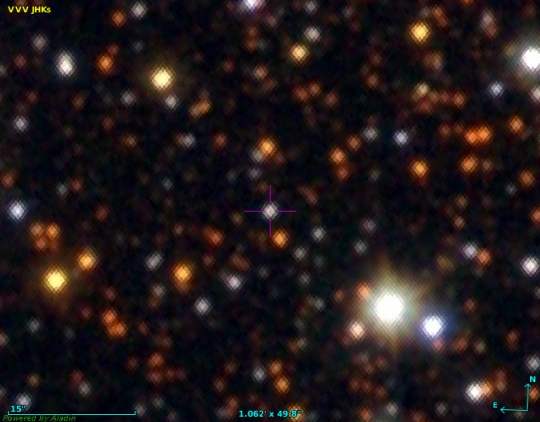 Image: VVV-WIT-07 in the centre of a star field. Credit: Saito et al.

This is fertile ground for discovery, but even so, the object known as VVV-WIT-07 is taking everyone a bit by surprise. We’re dealing with a star that reminds everyone of Boyajian’s Star (KIC 8462852), famed for its unusual dips in lightcurve. Were they signs of a Dyson Sphere under construction, or a natural phenomenon the likes of which we had never seen? Uneven rings of dust, dusty planetesimals or comets are still in contention. Now we have a star that is apparently even more extreme, one whose range in lightcurve variation is extraordinary. Viewed by the survey over a period of eight years, VVV-WIT-07 has been seem to dim first by a factor of 2, then by almost 80 percent. A week later, it was back to normal.

Here’s what the ESO blog had to say about the matter:

“The first observations showed nothing strange — simply a mild scatter in the brightness measurements, consistent with the observational uncertainties. However, in August–September 2011, just before the end of the observing season, the star dimmed by a factor of almost two! By June 2012, when we began re-observing it, the star’s brightness was nearly back to normal. But by mid-July, it had dimmed by almost 80%! Then it was back to its usual self in about a week. The data taken since then contain hints of additional drops in brightness, but nothing so dramatic.”

The WIT designation is fun — it stands for What Is This, and the VVV team is using it to describe any objects that do not apparently fit known classes of stellar variability. WIT may remind you of another appellation for Boyajian’s Star, which was the ‘WTF Star,’ its ambiguous acronym standing surely for ‘Where’s the Flux?’ Have a look at the lightcurve of VVV-WIT-07:

Image: Lightcurve of VVV-WIT-07 showing how it varied in brightness between 2010 and 2018. The insert shows an expanded view of the particularly dramatic dimming event that occurred in July 2012. Credit: Saito et al.

Is it possible we are looking at some kind of circumstellar disk with huge variations in it, a clumpy disk that blocks the star’s light in this highly irregular way? The odds on that seem long. Here is what the paper says:

Alternative scenarios for VVV-WIT-07 include a “dipper” T Tauri star with clumpy dust structures orbiting in the inner disk that transit our line of sight (e.g. Rodriguez et al. 2017), or even a long period, high-inclination X-ray binary. The deep, narrow eclipse delayed with respect to a broad and shallower dip is reminiscent of the morphology seen in high-inclination low-mass X-ray binaries (LMXB, e.g. Parmar et al. 1986; Baptista et al. 2002). However, LMXBs are restricted to orbital periods of less than a few days while high-mass x-ray binaries (HMXB) can be found at Porb up to hundreds of days (e.g. X1145-619 has Porb = 187.5 d, Watson et al. 1981). Moreover, in this scenario optical and IR spectra would be dominated by the mass-donor companion star, and should show rotationally-broadened hydrogen absorption lines at epochs of no mass ejection episodes, which is not the seen in the spectra of VVV-WIT-07.

So we have something that gives us echoes of Boyajian’s Star, and may also remind us of Mamajek’s Object (J1407), an interesting pre-main sequence K5 star with a ring system eclipsing it. Or something we haven’t yet identified, perhaps in the form of multiple objects, may be moving between us and the host star, even a dense family of comet-like objects. VIV-WIT-07 would be easy enough to explain if it were a binary, but the observations clearly rule that out.

VISTA has observed VIV-WIT-07 85 times already. Needless to say, it will be the subject of even more intense scrutiny. The paper also notes recent discoveries like OGLE LMC-ECL-11893, an eclipsing star consistent with a dense circumstellar dust disk structure, and PDS 110, an eclipsing system with likely transits by a companion with a circumstellar disc.

The paper is Saito et al., “VVV-WIT-07: another Boyajian’s star or a Mamajek’s object?” in process at Monthly Notices of the Royal Astronomical Society (preprint).