The odd lightcurve of the star known as VVV-WIT-07, discussed here last Friday, reminds us that even as we start seeing such signatures, we are tuning up our ability to find others. It’s a point that bears repeating from the paper on this work:

…surveys like ours, apart of course from its irregular cadence, may perhaps not have found objects like WIT-VVV-07 more often primarily because they were not looking specifically for this kind of variability.

The authors go on to say that next generation surveys like LSST (Large Synoptic Survey Telescope), now under construction, as well as space-based assets like the upcoming WFIRST and PLATO missions, will likely pin down further instances of unusual light curves.

It’s a point worth making again when we pivot to today’s discussion, on the asteroid known as (6478) Gault, a 4 kilometer-wide object currently some 344 million kilometers from the Sun. What we see here are two dusty tails reminiscent of a comet that are streaming behind Gault, an apparently gentle release of material that tells us the asteroid is gradually coming apart.

“We didn’t have to go to Gault,” explained Olivier Hainaut of the European Southern Observatory in Germany, a member of the Gault observing team. “We just had to look at the image of the streamers, and we can see all of the dust grains well-sorted by size. All the large grains (about the size of sand particles) are close to the object and the smallest grains (about the size of flour grains) are the farthest away because they are being pushed fastest by pressure from sunlight.” 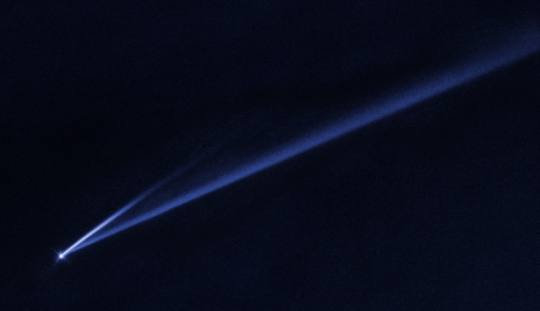 At work here is apparently the same YORP (Yarkovsky–O’Keefe–Radzievskii–Paddack) effect that seems to be gradually spinning up asteroid Bennu as examined by the OSIRIS-REx mission. You would think a collision between asteroids could produce the same visual effect, but observations with the Hubble Space Telescope, which took the above image, have shown no signs of any debris other than what we see in the two ‘tails.’

Scientists believe these will begin to fade within months as the dust is gradually dispersed. Their narrow shape is an indication that they were released in short bursts, a series of puffs that probably did not last more than a few days. Perhaps, as with WIT-VVV-07, we are looking at a phenomenon we’re soon to see more of, for enhanced survey efforts like Pan-STARRS (the Panoramic Survey Telescope and Rapid Response System at Haleakala Observatory, Hawaii) and ATLAS (Asteroid Terrestrial-impact Last Alert System, at Haleakala and Mauna Loa), are likely to find far more active asteroids than we’ve seen thus far. Both operations saw the Gault debris, ATLAS in early 2019 and Pan-STARRS in subsequent analysis of archival data.

Especially intriguing is the two-hour rotation period measured for Gault, which is about the critical speed at which a ‘rubble pile’ asteroid begins to break up. Jan Kleyna, lead author of the paper on this work, calls it “…the best smoking-gun example of a fast rotator right at the two-hour limit.” As to the YORP effect, it occurs when an asteroid is unevenly heated by incident sunlight, producing infrared radiation that carries off not only heat but momentum. The scientists studying Gault believe it could have been spinning up for more than 100 million years.

…dust emission is strongly suggestive of a rotation-induced event due to the YORP effect, as the object is spun-up by re-radiation forces until the apparent surface gravity is zero, triggering disruption or landslide events… releasing near-zero-velocity debris that is swept away by radiation pressure. Sudden and brief landslides are in accord with the abrupt dust releases described in §4. Because of the large mass of material released, it is likely that these landslides were significant, and that the equatorial velocity of the object is very close to the liberation velocity, i.e., that the surface material is tenuously held to the surface, with a proclivity to rearrange itself.

So we’re learning more about YORP and its potential for changing trajectories and causing surface disruption on asteroids, with missions to such objects as well as ever more refined distant observation. Keeping an eye on Gault for possible future events should tell us more, and help us determine just how rare such activity on the roughly 800,000 asteroids between Mars and Jupiter is. Current estimates are that similar asteroid events will occur about once a year.

The paper is Kleyna et al., “The Sporadic Activity of (6478) Gault: A YORP-driven event?,” accepted at Astrophysical Journal Letters (preprint).

Previous post: Unusual Lightcurve of a ‘What Is This’ Star