Putting a crater on an asteroid is no small matter, for it allows us to gather samples to further nail down the object’s composition. The Japan Aerospace Exploration Agency (JAXA) has achieved the feat on asteroid Ryugu using the Small Carry-on Impactor (SCI) carried by the Hayabusa2 spacecraft. Confirmation of the crater and details about its size will be forthcoming, but fortunately the spacecraft’s DCAM3 camera was able to record the event.

Following Hayabusa2 on Twitter (@haya2e_jaxa) is often the best way to keep up with operations at Ryugu (even as @OSIRISREx puts you inside that mission). The fact that we have two spacecraft in current operations around asteroids should be cause for continuing celebration. From the Hayabusa2 Twitter feed:

[SCI] The deployable camera, DCAM3, successfully photographed the ejector from when the SCI collided with Ryugu’s surface. This is the world’s first collision experiment with an asteroid! In the future, we will examine the crater formed and how the ejector dispersed. pic.twitter.com/eLm6ztM4VX

And with a closer look plus JAXA caption: 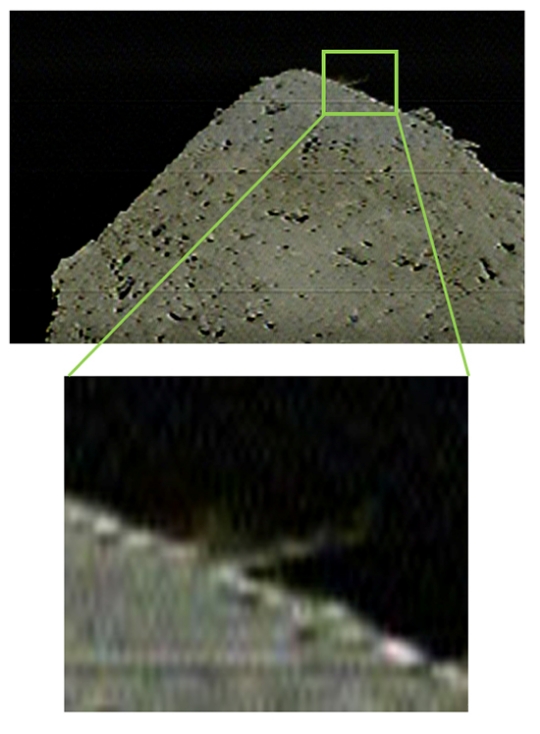 The spacecraft protected itself before impact by moving to the other side of Ryugu to avoid any debris stirred by the collision. And while Hayabusa2 has already gathered one sample from the asteroid’s surface, the material gathered as a result of the impact should give scientists the opportunity to study what is below the surface, pristine material that dates back to the early days of the Solar System. Sample return is currently scheduled for late 2020.

As to the asteroid’s composition, the early data from Hayabusa2 have already proven useful. Says Seiji Sugita (University of Tokyo), author of a recent paper on the asteroid:

“Just a few months after we received the first data we have already made some tantalising discoveries. The primary one being the amount of water, or lack of it, Ryugu seems to possess. It’s far dryer than we expected, and given Ryugu is quite young (by asteroid standards) at around 100 million years old, this suggests its parent body was much largely devoid of water too.” 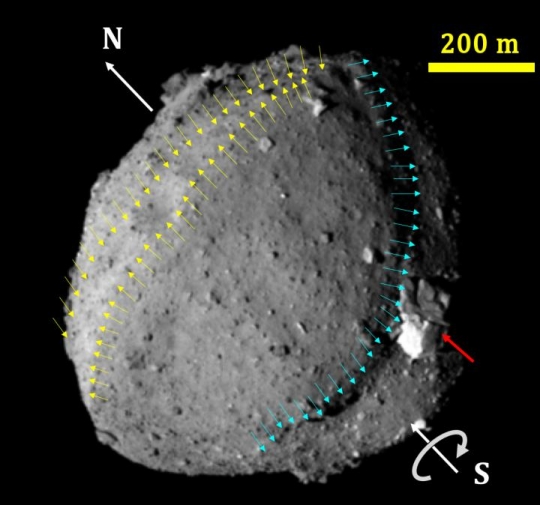 Both the visible-light camera and a near-infrared spectrometer aboard the spacecraft confirm the dearth of water, a significant result given that asteroids are thought to have supplied water to the early Earth, along with comets as well as the circumstellar disk of the system itself. Ryugu’s meager water stands in contrast to what OSIRIS-REx has found at asteroid Bennu. Although both asteroids appear similar, covered in boulders and presenting challenges to lander missions, Bennu contains considerably more water.

The paper examines a range of possibilities to explain this, but concludes that the general uniformity in color across Ryugu’s surface points to a parent asteroid that experienced internal heating caused by radioactive decay of Aluminium-26. As the authors note: “Internal heating can warm a large fraction of the volume of the parent body relatively uniformly, leaving a small volume of outer layer relatively cool.” The paper continues:

Although multiple scenarios for the evolution of Ryugu’s parent body remain viable, our comparison between Hayabusa2 remote-sensing data, meteoritic samples and asteroids leads us to prefer the scenario of parent-body partial dehydration due to internal heating. This scenario suggests that asteroids that accreted materials which condensed at ≤150 K (the H2O condensation temperature under typical solar nebula conditions) must have either formed early enough to contain high concentrations of radiogenic species, such as 26Al, or formed close to the Sun where they experienced other heating mechanisms). The degree of internal heating would constrain the location and/or timing of the snow line (i.e., the dividing line between H2O condensation and evaporation) in the early Solar System.

Thus the different traits of seemingly similar asteroids like Ryugu and Bennu offer plentiful ground for studying the astrophysical processes that shaped each. The paper is Sugita et al., “The geomorphology, color, and thermal properties of Ryugu: Implications for parent-body processes,” Science 19 March 2019 (abstract).

Next post: A Major Hubble Survey of the Kuiper Belt