Detection of an Interstellar Meteor

Do we have a second interstellar visitor, following on the heels of the controversial ‘Oumuamua? If so, the new object is of a much different nature, as was its detection. In 2014, a meteor north of Manus Island, off the coast of Papua New Guinea produced a powerful blast that, upon analysis, implied a ∼ 0.45m meter object massing about 500 kg. Events like this, not uncommon in our skies, are cataloged by the Center for Near Earth Object Studies (CNEOS); this one shows up as being detected at 2014-01-08 17:05:34 UTC. 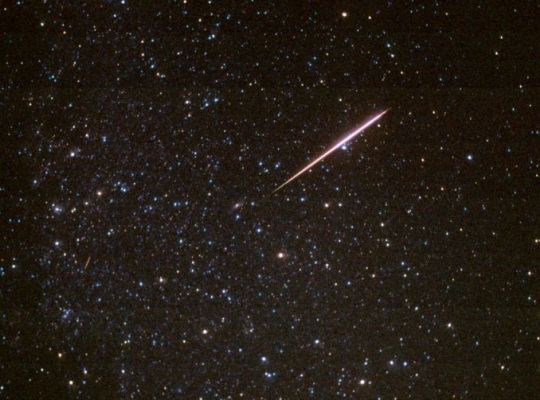 Image: This gorgeous wide-angle photo from the 1997 Perseid shower captures a 20-degree-long fireball meteor and another, fainter meteor trail in a rich area of the northern summer Milky Way. Showers like these are predictable, but could some solitary fireballs mark the end of a meteor with an interstellar origin? Credit & Copyright: Rick Scott & Joe Orman.

Now the CNEOS catalog, which covers the last three decades, is useful indeed, for it takes advantage of detectors maintained by the U.S. government to analyze the sound and light of the passage of objects through the atmosphere, producing information on velocity and position at the time of impact. Harvard’s Avi Loeb, a familiar face in the media thanks to the ‘Oumuamua discussion, worked with undergraduate student Amir Siraj, whom he set to calculating. What could we learn about the prior trajectory of meteors in the catalog, homing in on the fastest?

In a paper submitted to Astrophysical Journal Letters, Loeb and Siraj note the latter’s identification of the 2014 Manus Island meteor as interstellar in origin. The paper finds no substantial gravitational interactions between the meteor and any planet other than Earth. Indeed, based on the CNEOS-reported impact speed of 44.8 km s-1, Loeb and Siraj calculate a speed of 43.8 km s-1 outside the Solar System. For the object to be bound, the observed speed at impact would have to be off by more than 45%.

This meteor, then, was on an unbound hyperbolic orbit. We can go on from here to note the object’s relation to another useful metric. For measured relative to the Local Standard of Rest, this meteor entered the Solar System with a speed of 60 kilometers per second.

The Local Standard of Rest (LSR) is produced by averaging the motion of all stars in the Sun’s neighborhood. Siraj and Loeb speculate that this velocity could indicate ejection from a planetary system, specifically from the inner regions where orbital speeds are high. The object’s speed would imply a position inside the orbit of Mercury were it to come from a star like our own, but a red dwarf like Proxima Centauri would have an ejection speed from its habitable zone in this very regime. Recall that the habitable zone around Proxima Centauri is 20 times closer to the star than the HZ in our own system. So here’s an interesting thought: “Since dwarf stars are most common, the detection of this meteor offers new prospects for ‘interstellar panspermia,’ namely the transfer of life between planets that reside in the habitable zones of different stars.”

What I’m quoting from above is an as yet unpublished summation Loeb has recently written of the paper’s findings, one that goes on to speculate about its implications. Panspermia would require a larger object because it would have to survive the fiery passage through the atmosphere, but the notion that objects could be passed from star to star in this way is interesting (and note that Loeb is not identifying a Proxima Centauri origin for this meteor, but rather pointing to possible scenarios between stars). The point is that dwarf stars are the most common in the universe, and the detection of an interstellar meteor could point to what is perhaps a common form of transfer between stars.

Beyond that, consider the possibilities in studying interstellar materials when we may find them entering our own atmosphere. Says Loeb:

Using the Earth’s atmosphere as a detector for interstellar objects offers new prospects for inferring the composition of the gases they leave behind as they burn up in the atmosphere. In the future, Astronomers may establish an alert system that triggers follow-up spectroscopic observations to an impact by a meteor of possible interstellar origin. Alert systems already exist for gravitational wave sources, gamma-ray bursts, or fast radio bursts at the edge of the Universe. Even though interstellar meteors reflect the very local Universe, they constitute a “message in a bottle” with fascinating new information about nurseries which may be very different from the Solar System. Some of them might even represent defunct technological equipment from alien civilizations, which drifted towards Earth by chance, just like a plastic bottle swept ashore on the background of natural seashells.

Thus spectroscopy of gaseous debris burning up in the Earth’s atmosphere could offer us a way to make interstellar investigations of the kind we’ve been assuming would be decades (at least) off, assuming we can make a timely identification of likely targets.

The paper is Siraj & Loeb, “Discovery of a Meteor of Interstellar Origin,” submitted to Astrophysical Journal Letters (preprint).