About 250 light years away there is a faint object that is on the borderline between brown dwarf and star. Only a tenth of the radius of our Sun, ULAS J224940.13-011236.9 was actually too faint for most telescopes to observe until a huge flare lit it up, turning this L dwarf, among the lowest mass objects that can still be considered a star, 10,000 times brighter than it was before. Very cool compared to the average red dwarf, L dwarfs emit radiation primarily in the infrared.

But this story also has to do with visible light, and the question of how such a small object can produce such a powerful explosion. This was a ‘white light’ flare, a type of flare that displays associated brightening in the visible light spectrum. Astronomers believe flares are driven by magnetic energy, the sudden release of which can cause charged particles to heat plasma. In this case the resulting optical, ultraviolet and X-ray radiation was copious.

James Jackman, a PhD student in physics at the University of Warwick (UK) and lead author of the paper on these observations, points to the rare nature of this flare:

“The activity of low mass stars decreases as you go to lower and lower masses and we expect the chromosphere (a region of the star which support flares) to get cooler or weaker. The fact that we’ve observed this incredibly low mass star, where the chromosphere should be almost at its weakest, but we have a white-light flare occurring, shows that strong magnetic activity can still persist down to this level.” 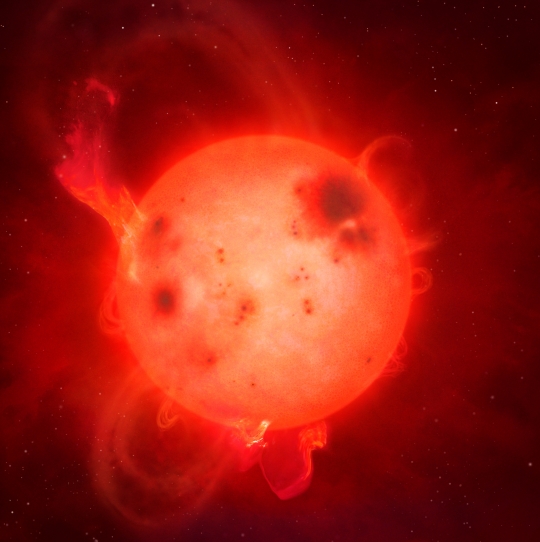 And note this from the paper on this work, on the unusual strength of some L dwarf flares:

While seen regularly on GKM stars, observations of white-light flares on L dwarfs remain rare, with only a handful of stars showing them to date (e.g. Paudel et al. 2018). However, those observed have included some of the largest amplitude flares ever recorded, reaching up to V ≈ −11 (Schmidt et al. 2016). This shows that white-light flaring activity persists into the L spectral type, despite previous studies of L dwarfs showing their chromospheres and magnetic activity to be diminished compared to those of late M dwarfs.

So a borderline brown dwarf/star is giving us an interesting lesson, perhaps on the difference between the two, because we may be able to determine whether flares like these are limited to actual stars, learning at just what point the activity ceases. Are there other tiny stars, like ULAS J224940.13-011236.9 about the same size as Jupiter, that mark the limits of such flares, below which none occur? Whatever the case, few L dwarfs have produced a flare of this magnitude.

Embedded in future work will surely be the question of how tiny stars like this one store energy in magnetic fields, and their level of chromospheric activity. From the paper:

Ultracool dwarfs are also known to exhibit auroral activity…, which may account for observed Hα [hydrogen alpha] emission [when a hydrogen electron falls from its third to second lowest energy level], in these systems. It is expected that the transition from predominantly chromospheric to auroral Hα emission occurs during the L spectral type… Many ultracool dwarfs that show activity such as radio emission and flaring also tend to be fast rotators, with rotation periods on the order of hours. However, neither the L1 dwarf SDSSp J005406.55−003101.8 (Gizis et al. 2017a) nor the L0 dwarf J12321827−0951502 (Paudel et al. 2018) showed any sign of rapid rotation when observed by K2, despite showing large amplitude white-light flares. Consequently, we do not attempt to predict whether ULAS J2249−0112 is a fast rotator. Regardless of this, studies of white-light flares such as from ULAS J2249−0112 can aid in understanding exactly how far into the L spectral type chromospheric activity persists.

The J224940.13-011236.9 data come from the Next Generation Transit Survey (NGTS) facility at the European Southern Observatory’s Paranal Observatory, with further data from the Two Micron All Sky Survey (2MASS) and Wide-field Infrared Survey Explorer (WISE), a total observation period of 146 days. The flare occurred on 13 August 2017, with an energy equivalent of 80 billion megatonnes of TNT, surpassing the largest flare (the Carrington event of 1859) ever observed on the Sun.

The paper is Jackman et al., “Detection of a giant white-light flare on an L2.5 dwarf with the Next Generation Transit Survey,” Monthly Notices of the Royal Astronomical Society: Letters Vol. 485, Issue 1 (May 2019), L136-L140 (abstract).