Refined Parameters for an Expanding Universe

When it comes to matching what we know of the early universe, as seen in the Cosmic Microwave Background (CMB), with what we see today, astronomers have their work cut out for them. Edwin Hubble could demonstrate that the universe was expanding by studying the redshift of galaxies as they receded, but the rate of that expansion has been controversial. Now we have new work based on data from the Hubble Space Telescope as well as the Araucaria Project (about which more in a moment) that is helping us refine the Hubble constant (H0) to tighten the parameters on how the universe’s expansion is accelerating.

The result: The universe is expanding some 9 percent faster than we would expect based on observations by the European Space Agency’s Planck satellite, which mined data from the CMB from 380,000 years after the Big Bang. Exactly what drives this accelerated expansion — an enhanced interaction between matter and something we have yet to detect, ‘dark’ matter, or the as yet unknown form of energy likewise called ‘dark’ — no one knows.

Nonetheless, our cosmos is doing something that we need to explain. Nobel laureate Adam Riess (Johns Hopkins University and Space Telescope Science Institute) is lead researcher on this work. Riess’ Nobel came in 2011, shared with Saul Perlmutter and Brian Schmidt for demonstrating that the expansion of the universe was accelerating. We now firm up that discovery yet further. Riess says the chances of this observation being in error have dwindled from 1 in 3,000 to 1 in 100,000, adding “This disparity could not plausibly occur by chance.”

“This is not just two experiments disagreeing,” Riess added. “We are measuring something fundamentally different. One is a measurement of how fast the universe is expanding today, as we see it. The other is a prediction based on the physics of the early universe and on measurements of how fast it ought to be expanding. If these values don’t agree, there becomes a very strong likelihood that we’re missing something in the cosmological model that connects the two eras.” 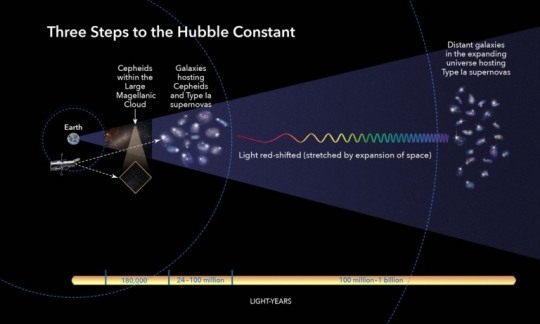 Image: This illustration shows the three basic steps astronomers use to calculate how fast the universe expands over time, a value called the Hubble constant. All the steps involve building a strong “cosmic distance ladder,” by starting with measuring accurate distances to nearby galaxies and then moving to galaxies farther and farther away. This “ladder” is a series of measurements of different kinds of astronomical objects with an intrinsic brightness that researchers can use to calculate distances. Credit: NASA, ESA, and A. Feild (STScI).

Riess is working with a team called SHOES, for Supernovae, H0, for the Equation of State, which analyzed the light of 70 Cepheid variable stars in the Large Magellanic Cloud. Cepheid variables are ‘standard candles’ that brighten and dim at predictable rates, making it possible to measure the distance between galaxies. On the immediate level of data acquisition, the team was able to sharply reduce the time normally required for studying a Cepheid with Hubble (one star for every 90 minute orbit). Using a technique called Drift And Shift (DASH), Hubble can take quick ‘point and shoot’ images, considerably speeding the process.

With the Hubble data in hand, Riess combined them with observations from the Araucaria Project, which is an international collaboration studying the calibration of extragalactic distance, with considerable attention to Cepheid variables, RR Lyrae stars and other potential distance markers. The group has used eclipsing binaries to tighten our distance estimates to the Large Magellanic Cloud. The combined data helped refine the true brightness of the Cepheids. 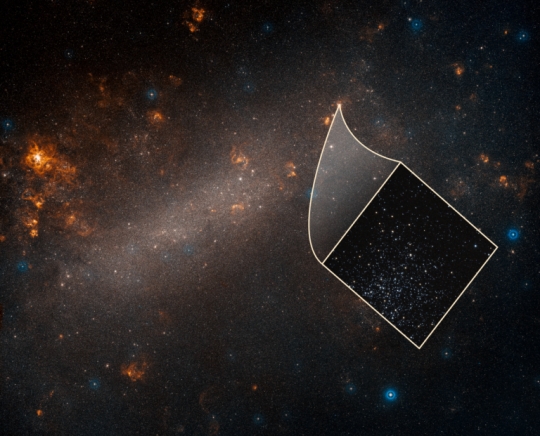 Image: This is a ground-based telescope’s view of the Large Magellanic Cloud, a satellite galaxy of our Milky Way. The inset image, taken by the Hubble Space Telescope, reveals one of many star clusters scattered throughout the dwarf galaxy. Credit: NASA, ESA, Adam Riess, and Palomar Digitized Sky Survey.

We get a new estimate of 74.03 kilometres per second per megaparsec for Hubble’s constant, which means that for every 3.3 million light years further away a galaxy is from us, it appears to be moving 74 kilometers per second faster. This is a result of the expansion of the universe, and as mentioned above, is a figure 9 percent higher than the Planck observations of the early universe. The latter pegged the Hubble constant at 67.4 kilometres per second per megaparsec.

Consider the values we’ve determined for the Hubble constant in recent decades. A factor of two separated estimates of the constant in the days before the Hubble Space Telescope was available. By the late 1990s, the Hubble Space Telescope Key Project on the Extragalactic Distance Scale refined the value to within 10 percent. By 2016, with the discovery that the universe was expanding faster than previously calculated, the uncertainty dropped to 2.4 percent. What Riess and team have done is to reduce that figure down to 1.9 percent.

“The Hubble tension between the early and late Universe may be the most exciting development in cosmology in decades,” says Riess. “This mismatch has been growing and has now reached a point that is really impossible to dismiss as a fluke.”

And where do we go from here? From the paper (note the reference to gravitational waves, as well as to the supernovae used to extend distance measurements deeper into the cosmos):

A new feature in the dark sector of the Universe appears increasingly necessary to explain the present difference in views of expansion from the beginning to the present… Continued pursuit in precision in the determination of H0 is also needed to transition from the discovery of a difference to a diagnosis of its source. Additional observations of giants and pulsating stars in more hosts of SNe Ia [supernovae] are underway and should further refine H0. Less predictable but highly sought are contributions from gravitational wave sources as standard sirens (Schutz 1986; Abbott et al. 2017; Chen et al. 2018). Improvements in parallaxes from future Gaia data releases are also expected to continue to increase the precision of the distance ladder in the near term.

The paper is Riess et al., “Large Magellanic Cloud Cepheid Standards Provide a 1% Foundation for the Determination of the Hubble Constant and Stronger Evidence for Physics Beyond LambdaCDM,” accepted at the Astrophysical Journal (preprint).