Toward a High-Velocity Astronomy

Couple the beam from a 100 gigawatt laser with a single-layer lightsail and remarkable things can happen. As envisioned by scientists working with Breakthrough Starshot, a highly reflective sail made incredibly thin — perhaps formed out of graphene and no thicker than a single molecule — could attain speeds of 20 percent of c. That’s good enough to carry a gram-scale payload to the nearest stars, the Alpha Centauri triple system, with a cruise time of 20 years, for a flyby followed by an agonizingly slow but eventually complete data return.

A key element in the concept, as we saw yesterday, is the payload, which could take advantage of microminiaturization trends that, assuming they continue, could make a functional spacecraft smaller than a cell phone. The first iterations of such a ‘starchip’ are being tested. The Starshot work has likewise caught the attention of Bing Zhang, a professor of astrophysics at the University of Nevada, Las Vegas. Working with Kunyang Li (Georgia Institute of Technology) Zhang explores in a new paper the kind of astronomy that could be done by such a craft.

For getting to Proxima Centauri for the exploration of its interesting planet involves a journey that could itself provide a useful scientific return. The paper’s title, “Relativistic Astronomy,” flags its intent to study how movement at relativistic speeds would affect images taken by its camera. As Zhang explains in a recent essay on his work in The Conversation, when moving at 20 percent of lightspeed, an observer in the rest frame of the camera would experience the universe moving at an equivalent speed in the opposite direction to the camera’s motion.

Relativistic astronomy, then, explores these different spacetimes to observe objects we are familiar with from our Earth-based perspective as they are seen in the camera’s rest frame. Zhang and Li consider this “a new mode to study astronomy.” Zhang goes on to say:

…a relativistic camera would naturally serve as a spectrograph, allowing researchers to look at an intrinsically redder band of light. It would act as a lens, magnifying the amount of light it collects. And it would be a wide-field camera, letting astronomers observe more objects within the same field of view of the camera. 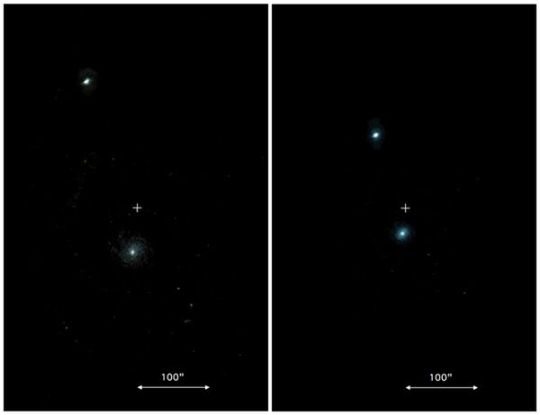 Image: Observed image of nearby galaxy M51 on the left. On the right, how the image would look through a camera moving at half the speed of light: brighter, bluer and with the stars in the galaxy closer together. Zhang & Li, 2018, The Astrophysical Journal, 854, 123, CC BY-ND.

Such observations become intriguing when we consider how light from the early universe is red-shifted as a result of the expansion of the cosmos. Zhang and Li point out that a camera moving at the relativistic speeds of the Proxima Centauri probe sees this redshifted light becoming bluer, counteracting the effect of the universe’s expansion. Light from the early universe that would have had to be studied at infrared wavelengths would now be susceptible to study in visible light. The camera, then, becomes a spectrograph allowing the observation of everything from remote galaxies to the cosmic microwave background.

Moreover, other relativistic effects come into play that add value to the fast camera. From the paper on this work:

…unique observations can be carried out thanks to several relativistic effects. In particular, due to Doppler blueshift and intensity boosting, one can use a camera sensitive to the optical band to study the near-IR bands. The light aberration effect also effectively increases the field of view of the camera since astronomical objects are packed in the direction of the camera motion, allowing a more efficient way of studying astronomical objects.

Let me depart for a moment from the Zhang and Li paper to pull information from a University of California at Riverside site, a page written by Alexis Brandeker, and presumably illustrated by him. In the figure below, we see only the effect of aberration at a range of velocities. Notice how the field becomes squeezed at we move from 0.5 c to 0.99 c. At 0.99 c, almost all visible radiation from the universe is confined to a region 10 degrees in radius around the direction of travel.

Image: This figure shows aberration effects for the ship travelling towards the constellation of Orion, assuming a 30 degrees field of view. The field of view is kept constant, only the speed is changed from 0 to 0.99c, showing dramatic effects on the perceived field. No radiative effects are considered, only geometrical aberration. Credit: Alexis Brandeker/UC-R.

But to get the overview, we have to fold in Doppler effects as infrared radiation is shifted into the visible. If we combine these effects in a single image, we get the startling view below.

But back to Zhang and Li, whose camera aboard the probe is a spectrograph, a lens, and a wide-field camera all in one. The authors make the case that fast-moving cameras can likewise be used to probe the so-called ‘redshift desert’ (at 1.4 ≲ z ≲ 2.5) that coincides with the epoch of significant star formation (the name comes from the lack of strong spectral lines in the optical band here). Lacking data, we have no large sample of galaxies in a particular range of redshifts, which hinders our understanding of star formation.

Zhang and Li consider relativistic observations of gamma-ray bursts (GRBs) at extreme redshifts, as well as tracing the electromagnetic counterparts to gravitational wave events. Thus a Breakthrough Starshot payload enroute to Alpha Centauri offers a new kind of astronomy if we can master the construction of a camera that can withstand a journey through the interstellar medium without damage from dust as well as one that can transmit its data back to Earth.

What struck me as I began reading this paper is that when it comes to relativistic effects, 20 percent of lightspeed is actually on the slow side, making me wonder how much better the kind of observations the authors describe would be at higher velocities. But Zhang and Li move straight to this question, describing the relativistic effect of a Starshot probe as ‘mild,’ and noting that a Breakthrough laser infrastructure might be used for faster, dedicated astronomy missions.

If one drops the goal of reaching Alpha Centauri, cameras with even higher Doppler factors may be designed and launched. A Doppler factor of 2 and 3 (which gives a factor of 2 and 3 shift of the spectrum) is available at 60% and 80% speed of light, respectively. More interesting astronomical observations can be carried out at these speeds.

While probes in this range would demand ever more powerful acceleration from their laser energy source, they might actually be easier to build, for the need for cosmic ray shielding on a long cruise or data transmission at interstellar distances would be alleviated by sending them on missions closer to home. Of course, pushing probes to speeds much higher than 20 percent of c is even more problematic than the Centauri mission itself. Beyond Starshot, the authors argue that relativistic astronomy will repay the effort if we continue to push in the direction of beamed laser probes with an eye toward ever faster, more capable missions.