A Supernova Link to Ancient Wildfires?

Did huge fires several million years ago force a transition from forest to savanna in northeast Africa? It’s a tantalizing thought, as such fires have been seen as a possible factor in driving the emergence of bipedalism in our remote ancestors. Adrian Melott (University of Kansas), who looks at the question in a new paper in the Journal of Geology, notes that our precursors would have adapted to such massive changes to their habitat, evolving to support life amidst the abundant grasslands that had replaced their former tree-filled environments.

The conjecture about early hominins is receiving a lot of attention, but it plays only a small role in this paper, which focuses on the linkage between supernovae activity and the period in question. Just how do we make the call on a nearby supernova? Melott has been studying the question for some time, and refers back to 2016 studies of ancient seabed deposits of iron-60 isotopes that appeared in Nature. At that time, two supernovae events, one from 1.7 to 3.2 million years ago, the other from 6.5 to 8.7 million years ago, were identified via iron-60 deposits.

The new study points to the accumulating evidence for supernovae in the vicinity of the Earth, finding the strongest signal at 2.6 million years, and notes that this may represent a series of supernovae beginning as far back as 7 million years that Melott relates to the clearing out of the Local Bubble, which is a cavity in the interstellar medium in the Orion Arm in which our own Local Interstellar Cloud is located. Supernovae are thought to have emptied this cavity. 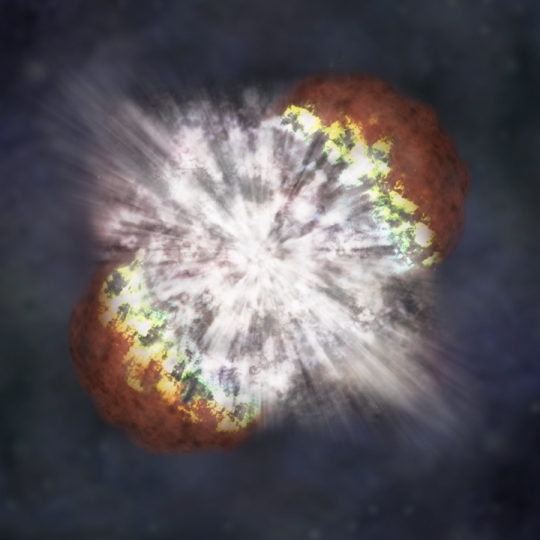 Image: Supernovae bombarded Earth with cosmic energy starting as many as 8 million years ago, with a peak some 2.6 million years ago, initiating an avalanche of electrons in the lower atmosphere and setting off a chain of events that conceivably ended with bipedal hominins such as homo habilis. Credit: NASA.

In the paper, Melott and colleague Brian Thomas (Washburn University) assume a supernova occurring 2.6 million years ago at a distance of 50 parsecs, or 163 light years, a time after the Local Bubble had already formed. The authors compute the extent of cosmic ray propagation and consider effects on terrestrial life, with particular regard to muons, the highly penetrating elementary particles that are the primary component of cosmic ray irradiation at the surface.

A key result is increased ionization of the atmosphere as a result of supernovae cosmic rays, with ‘electron avalanches’ set off that are the primary initiator of lightning (a still controversial idea, though one the authors cite recent evidence to support). From the paper:

A 50 times increase in atmospheric ionization in the troposphere would clearly make the breakdown and electron cascade much easier, and one could expect a great increase in lightning (e.g. Erlykin and Wolfendale, 2010). Furthermore, the originally isotropic distribution of cosmic rays would result in showers which are much more preferentially vertical, due to the variation in atmospheric column density with angle. So, not only would lightning be enhanced, but cloud-to-ground lightning should be preferentially enhanced. The theory of lightning initiation is not well-developed, and we cannot say that a 50-fold increase in ionization would lead to a 50-fold increase in the number of lightning events. However, the potential is there for a large increase.

As the paper notes, lightning is the main initiator of wildfires (excluding humans), and an increase in lightning strikes would be expected to induce large numbers of wildfires. The conversion of forest to savanna, a worldwide phenomenon beginning about 7 million years ago, may have been caused by the increase in wildfires associated with this period, as found in soot and other carbon-related sediments. Thus the notion, not emphasized in the paper, that supernovae could have played a role in human evolution. Here’s Melott on the matter:

“The observation is that there’s a lot more charcoal and soot in the world starting a few million years ago. It’s all over the place, and nobody has any explanation for why it would have happened all over the world in different climate zones. This could be an explanation. That increase in fires is thought to have stimulated the transition from woodland to savanna in a lot of places — where you had forests, now you had mostly open grassland with shrubby things here and there. That’s thought to be related to human evolution in northeast Africa. Specifically, in the Great Rift Valley where you get all these hominin fossils.”

Supernovae are not frozen in time, so the logical question is whether events like these could occur in our future. A possible future Type II supernova (resulting from the collapse of a massive star and subsequent explosion) can be found in Betelgeuse, which may light up the skies sometime in the next million years, according to current estimates. But at 200 parsecs, it is not likely to cause major consequences. Melott and Thomas see solar events as far more concerning as we consider solar flares in the context of our technological civilization.

The paper is Melott and Thomas, “From cosmic explosions to terrestrial fires?” published online by the Journal of Geology 28 May 2019. Abstract / Preprint.