I’ve argued in these pages that the interstellar effort will be driven as much by planetary protection as by the human exploratory impulse. I count the latter as crucial, but we often think of planetary protection as an immediate response to a specific problem. Let’s place it, though, in context. Now that we’re actively cataloging asteroids that come near the Earth, we have to know how and when to react if what looks like a dangerous trajectory turns into a deadly one. That mandates a continued level of observation and progress on mitigation technologies.

A small nudge counts for a lot with an object that’s a long way out, and we can’t exclude, for example, long period comets in our thinking about planetary protection. So mitigation strategies that begin with changing the trajectory of a small, nearby object will grow with our capabilities to encompass more distant options, and that incentivizes the building of a defensive infrastructure that can operate deep into the Solar System. We need deep space technologies that can not only form a warning network but a defensive screen in case a threat develops.

We’ll build out a Solar System infrastructure one day that can do these things, one with inevitable consequences for the technologies that also foster exploration far beyond Sol. So when I see the recent images of the asteroid 1999 KW4, I’m also reminded of another binary asteroid called Didymos. With its companion (‘Didymoon’), Didymos is to be the subject of a NASA asteroid mitigation experiment, in which the DART spacecraft will impact the small moon in 2022 to gauge orbital changes that can be induced around the larger object. The European Space Agency will follow up with data from the asteroid in 2026 in a mission called Hera.

As to DART itself, the acronym stands for Double Asteroid Redirection Test. We’re talking about an impactor demonstrating the kinetic effects on the tiny object to see just how effective a deflection strategy may be. Didymos is not an Earth-crosser but it does provide a useful venue for the experiment. It’s worth remembering that a variety of options exist for asteroid mitigation, but DART will offer the first kinetic impact test at a scale realistic for planetary defense. 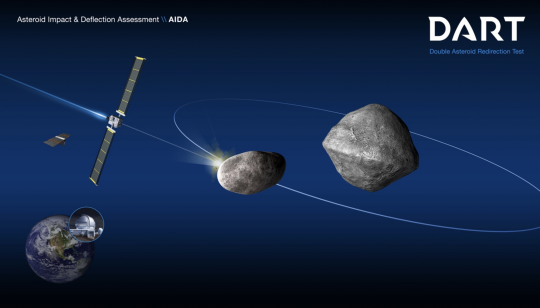 Image: Schematic of the DART mission shows the impact on the moonlet of asteroid (65803) Didymos. Post-impact observations from Earth-based optical telescopes and planetary radar would, in turn, measure the change in the moonlet’s orbit about the parent body. Credit: NASA/Johns Hopkins Applied Physics Lab.

But back to 1999 KW4. which was imaged by the SPHERE instrument (Spectro-Polarimetric High-Contrast Exoplanet Research) on the European Southern Observatory’s Very Large Telescope. SPHERE was designed to be an exoplanet hunter using adaptive optics to screen out atmospheric distortion, but it proved its mettle much closer to home by providing sharp images of an asteroid just 1.3 kilometers wide that flew by the Earth in late May, offering the opportunity for an observing campaign coordinated by the International Asteroid Warning Network (IAWN).

“These data, combined with all those that are obtained on other telescopes through the IAWN campaign, will be essential for evaluating effective deflection strategies in the event that an asteroid was found to be on a collision course with Earth,” said ESO astronomer Olivier Hainaut. “In the worst possible case, this knowledge is also essential to predict how an asteroid could interact with the atmosphere and Earth’s surface, allowing us to mitigate damage in the event of a collision.” 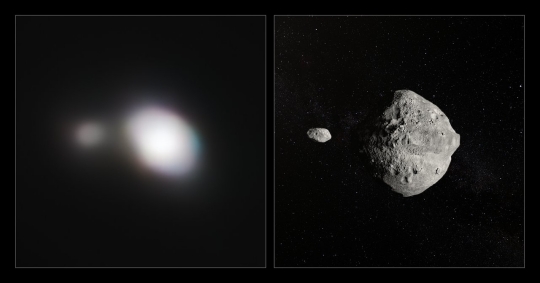 Image: The unique capabilities of the SPHERE instrument on ESO’s Very Large Telescope have enabled it to obtain the sharpest images of a double asteroid as it flew by Earth on 25 May. While this double asteroid was not itself a threatening object, scientists used the opportunity to rehearse the response to a hazardous Near-Earth Object (NEO), proving that ESO’s front-line technology could be critical in planetary defence. The left-hand image shows SPHERE observations of Asteroid 1999 KW4. The angular resolution in this image is equivalent to picking out a single building in New York — from Paris. An artist’s impression of the asteroid pair is shown on the right. Credit: ESO.

The two components of 1999 KW4, separated by about 2.6 kilometers, were moving at approximately 19.5 kilometers per second as they flew past the Earth, a challenge for observers not only because of their faintness and fast motion, but because atmospheric conditions were unstable at the time and the SPHERE adaptive optics system crashed more than once, though operations were quickly restored. The asteroid and tiny satellite reached a minimum distance of 5.2 million kilometers from Earth on May 25, about 14 times the distance to the Moon.