On Monday I was talking about the rise of open access scientific journals, using the European Space Agency’s Acta Futura as just one example. The phenomenal arXiv service, not itself a journal but a repository for preprints of upcoming papers, is already well known in these pages. Now we have the largest public release of SETI data in the history of the field, a heartening follow-through on a trend that broadens the audience for scientific research.

Breakthrough Listen is presenting two publications in the scientific literature (available as full text, citation below) describing the results of three years of radio and optical observations, along with the availability of a petabyte of data from its work at the Green Bank instrument in West Virginia and the Parkes Radio Telescope in Australia. This covers a sample of 1327 nearby stars (within 160 light years from Earth) and builds on the team’s results on 692 stars as presented in 2017.

No signs of extraterrestrial civilizations turn up in the analysis, says Parkes project scientist Danny Price, who emphasizes that the search will continue:

“This data release is a tremendous milestone for the Breakthrough Listen team. We scoured thousands of hours of observations of nearby stars, across billions of frequency channels. We found no evidence of artificial signals from beyond Earth, but this doesn’t mean there isn’t intelligent life out there: we may just not have looked in the right place yet, or peered deep enough to detect faint signals.” 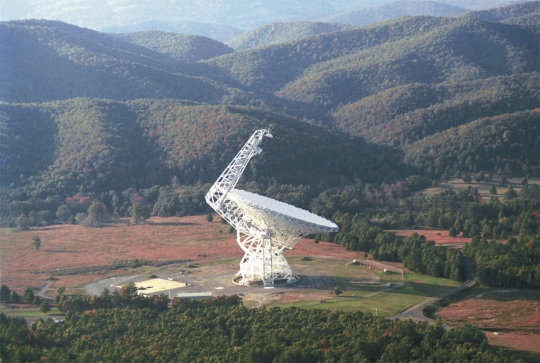 There are reasons why making such data public benefits the SETI effort. Both within the public and the astronomical community, those interested can now download the results of these observations and examine them independently. Those with programming skills may well develop algorithms for the detection of signals and filtering out of background noise that improve on the current model. And there may be information within the datasets that will prove useful in the investigation of unrelated astrophysical phenomena.

The existing tools developed by the Breakthrough Listen science team at the Berkeley SETI Research Center (BSRC) include both radio frequency searches as well as optical scans and algorithms designed to flag unexplained astrophysical phenomena. Go to this UC-Berkeley page for the overview, including the two just released papers. Likewise available to the public are software tools used in the analysis such as blimpy (for loading raw format data files), and turboSETI (for running Doppler drift searches). The datasets are examined in the analysis paper by Dr. Price and made available at the Breakthrough Listen Open Data Archive and via BSRC (more search options available at the latter).

For those wanting to get into data crunching themselves, the second paper (lead author Matt Lebofsky at Berkeley) goes into the intricacies of the current analysis, the tools used, the data formats and the archival systems now in play. “While we have been making smaller subsets of data public before in varying forms and contexts,” says Lebofsky, “we are excited and proud to offer this first cohesive collection along with an instruction manual, so everybody can dig in and help us search. And we’re just getting started – there’s much more to come!”

Considering the complexities involved in creating a search ‘pipeline’ that can scan through billions of radio channels, the more eyes on search algorithms and filtering techniques, the better. Thus far the detected signals have come from human technologies, with the Breakthrough Listen team filtering for narrow-band signals showing a Doppler drift, meaning they change in frequency with time because of their motion with respect to the telescope.

A second filter in the pipeline removes signals that do not appear to originate from a fixed point on the sky. The application of both techniques reduces millions of signals down to a comparative few, all of which have been examined and found to be human-generated frequency interference. From the Price paper, which notes that in its search for narrowband signals showing Doppler drift, 51 million hits emerged, with 6154 that cleared the automated filtering process, leading to a final round of manual inspection and cross-referencing against known sources of interference:

…these observations constitute the most comprehensive survey for radio evidence of advanced life around nearby stars ever undertaken, improving on the results of Enriquez et al. (2017) in both sensitivity and number of stars. Together with other recent work from the resurgent SETI community, we are beginning to put rigorous and clearly defined limits on the behavior of advanced life in the universe. We note that significant additional observational and theoretical work remains to be done before we are able to make general statements about the prevalence of technologically capable species.

Be aware that the archive also includes data from Breakthrough Listen observations of the first repeating fast radio burst ever detected, FRB 121102, as well as scans of the ‘Oumuamua object, along with optical data from the Automated Planet Finder at Lick Observatory. The search of nearby stars continues while also being expanded into the galactic disk at Parkes, and a one-million star sample with the MeerKAT telescope in South Africa is forthcoming.