We have two stories with good news on the asteroid impact front this morning. The first, out of the University of Hawaii’s Institute for Astronomy, is the announcement of the detection of a small asteroid prior to its entering the Earth’s atmosphere. That many not sound unusual, but this is the first time an object could be detected in time to move people away from a impact site, even though asteroid 2019 MO was only about 4 meters across and burned up in the atmosphere. The key is warning time, and here that time would have been half a day.

An impactor like the 20-meter object that exploded over Chelyabinsk, Russia in 2013 could, with these same methods, be detected by the ATLAS facility at Maunaloa (Hawaii) several days before impact. ATLAS is made up of two telescopes, one on Hawaiʻi Island, the other 160 kilometers away at Haleakalā, Maui, providing whole-sky scans every two nights. About 100 asteroids larger than 30 meters in diameter are discovered by the facility every year.

In the case of 2019 MO, the ATLAS Maunaloa site picked up the object on the morning of June 22 when it was about 500,000 kilometers from Earth. Meanwhile, the Pan-STARRS 2 survey telescope at Haleakalā had imaged the same part of the sky about two hours earlier than ATLAS, revealing the incoming asteroid. The combination of data from the two sites allowed the object’s entry path to be refined, showing a likely impact that matched later Nexrad weather data in Puerto Rico, showing an entry over the ocean about 380 kilometers south of San Juan. 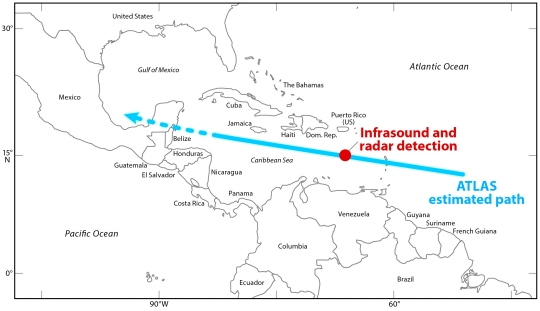 Image: A map of the predicted trajectory and final impact location for asteroid 2019MO. The predicted path is based on observations from the University of Hawaiʻi’s ATLAS and Pan-STARRS survey telescopes. Credit: Larry Denneau (IfA/ATLAS), Brooks Bays (SOEST).

So we’re getting some lead time on impactors even at this small scale, an indication that surprises from larger objects will be less likely in the future. Likewise cheering is news from research at NASA Ames which has just appeared in a special issue of Icarus, growing out of a workshop sponsored at Ames by the NASA Planetary Defense Coordination Office. Its theme: A new look at Tunguska, the 1908 impact that wreaked havoc in Siberia.

500,000 acres of uninhabited forest were flattened by the event, which was seen by few but left enough damage to alert scientists that this had not been a volcanic explosion or a mining accident, even though the first serious investigations didn’t occur until the 1920s. Today we look back at Tunguska as a kind of signature event, says Ames scientist David Morrison:

“Tunguska is the largest cosmic impact witnessed by modern humans. It also is characteristic of the sort of impact we are likely to have to protect against in the future.”

And the good news is that computer modeling discussed in the new papers shows that the interval between impacts like Tunguska is not, as has been previously estimated, on a timescale of centuries but rather millennia. 50 million combinations of asteroid and entry properties were analyzed by the computer models deployed here, some of them trying to match atmospheric pressure waves with the seismic signals recorded on the ground at the time, while others homed in on the kind of event that could produce the Tunguska treefall pattern and soil burn distribution. Four different computer modeling codes arrived at similar conclusions.

Thus we tighten our understanding of how rocks break apart in the atmosphere. The results show a stony Tunguska impactor between 50 and 80 meters in diameter that entered the atmosphere at about 15 kilometers per second, producing the equivalent of a 10 to 30 megaton explosion at between 9.5 and 14.5 kilometers altitude. The researchers used the latest estimates of the asteroid population to make the calculation of millennia between such impacts, correcting the earlier estimate that had been based on a smaller impactor. 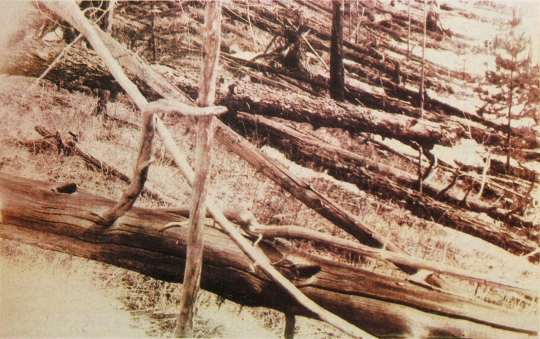 Image: Trees flattened by the intense shock wave created in the atmosphere as the space rock exploded above Tunguska on June 30, 1908. The photograph was taken by the Soviet Academy of Science 1929 expedition led by Leonid Kulik. 500,000 acres, the size of a large metropolitan city, were flattened. Flattening trees requires an immense shock wave. Credit: Wikimedia Commons.

The new Tunguska work also draws upon extensive video observations and maps of the Chelyabinsk event. The advances in computer models that result show that the Chelyabinsk impactor was likely a stony asteroid that broke up about 24 kilometers above the ground, producing a shock wave like that of a 550 kiloton explosion. Chelyabinsk-class objects are thought to impact the Earth every 10 to 100 years, so learning how to provide sufficient warning, as the ATLAS and Pan-STARRS work shows us is now possible, can potentially save lives.

“Because there are so few observed cases, a lot of uncertainty remains about how large asteroids break up in the atmosphere and how much damage they could cause on the ground,” says Lorien Wheeler, a researcher from Ames, working on NASA’s Asteroid Threat Assessment Project. “However, recent advancements in computational models, along with analyses of the Chelyabinsk and other meteor events, are helping to improve our understanding of these factors so that we can better evaluate potential asteroid threats in the future.”

The seven papers on Tunguska and computational modeling of impact events growing out of the Ames workshop appear in a special issue of Icarus that can be found here.