A paper called “The Natural History of ‘Oumuamua,” just out in Nature Astronomy, puts the emphasis on the word ‘natural.’ We know how much of a stir in the media the interstellar visitor has made given its peculiarities, and the hypothesis put forward by Harvard’s Avi Loeb that it could be a technological object. Now we have a group of 14 astronomers, European as well as American, who have assessed the available data from all angles.

This is a worthwhile effort, assembling a team at the International Space Science Institute (ISSI) in Bern, Switzerland that intends to meet once again later in the year. It considers the question of whether the extraterrestrial spacecraft hypothesis is supported by examination of all the peer-reviewed work that has thus far appeared. Matthew Knight (University of Maryland), working with Alan Fitzsimmons (Queen’s University Belfast) assembled the team. Knight believes that natural phenomena can explain ‘Oumuamua:

“We put together a strong team of experts in various different areas of work on ʻOumuamua. This cross-pollination led to the first comprehensive analysis and the best big-picture summary to date of what we know about the object. We tend to assume that the physical processes we observe here, close to home, are universal. And we haven’t yet seen anything like ʻOumuamua in our solar system. This thing is weird and admittedly hard to explain, but that doesn’t exclude other natural phenomena that could explain it.” 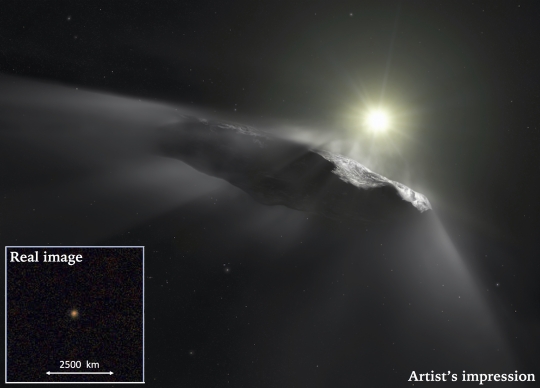 Image: This artist’s impression shows the first interstellar object discovered in the Solar System, ʻOumuamua. Observations made with the NASA/ESA Hubble Space Telescope, CFHT, and others, show that the object is moving faster than predicted while leaving the Solar System. The inset shows a color composite produced by combining 192 images obtained through three visible and two near-infrared filters totaling 1.6 hours of integration on October 27, 2017, at the Gemini South telescope. Credit: ESA/Hubble, NASA, ESO/M. Kornmesser, Gemini Observatory/AURA/NSF.

As we have no new observations of ‘Oumuamua, the paper produced by this team is an analysis of existing data, including a December 2017 paper on the object’s shape and spin co-authored by Knight. When the scientist calls the object ‘weird,’ he’s at least partially referring to its apparent acceleration along its trajectory, which suggests a comet even if astronomers could find no evidence of the kind of gaseous outflow that would propel even a small acceleration. We see no coma of ice, dust and gas, no evidence for gas jets, no cometary ‘tail.’

Karen Meech (University of Hawaii), who was lead author on the research paper that reported the discovery of ‘Oumuamua not long after it was identified at the Pan-STARRS observatory, had noted the object’s red color and elongated shape, apparent in changes in its reflectivity as it rotated. But on the matter of cometary behavior, Meech sees no need for anything beyond natural processes at work, saying “…while it is disappointing that we could not confirm the cometary activity with telescopic observations it is consistent with the fact that ʻOumuamua’s acceleration is very small and must therefore be due to the ejection of just a small amount of gas and dust.”

To see full text of the paper, see this link (thanks Alex Tolley for an alternate link!) On the specific question of alien technologies, the paper has this to say:

The key argument against the solar-sail hypothesis is ‘Oumuamua’s light-curve amplitude. For a solar sail to cause the observed non-gravitational acceleration, it needs to remain properly oriented towards the Sun. However, to yield the observed brightness variations, its orientation would need to be varying as viewed from Earth. Furthermore, since the actual dimensions of the solar sail would be >10:1, the orientation as viewed from Earth would need to be very nearly edge on, and remain so throughout the observations despite viewing geometry changes. It has not been shown that an orientation exists that can achieve all of these constraints imposed by the observational data. Furthermore, as discussed earlier, the shape of ‘Oumuamua’s light curve, with broad maxima and narrow minima, is consistent with an elongated ellipsoid.

We also find this on albedo:

The claim that ‘Oumuamua must be at least ten times ‘shinier’ than all Solar System asteroids to make the Spitzer Space Telescope data consistent with the ground-based observations is incorrect. The Spitzer observations are consistent with geometric albedos 0.01 ≤ pv ≤ 0.5…, with a most likely albedo of pv ~ 0.1. Comets have geometric albedos of pv = 0.02–0.07, carbonaceous and silicate asteroids have pv = 0.05–0.21, and the most reflective asteroids have pv ~ 0.5… Thus ‘Oumuamua’s measured reflectivity of about 0.1 is entirely consistent with normal Solar System small bodies.

And on the argument that the kinematics of the object are unusual:

While provocative, this argument is baseless. First, ‘Oumuamua’s trajectory is consistent with predictions for detectable inactive interstellar objects. Second, the measured number density cannot be claimed to be at odds with expectations because of our ignorance of the size distribution of interstellar objects.

‘Oumuamua is destined to remain enigmatic, for our dataset represents all that could be collected before the interstellar visitor had traveled beyond the view of our telescopes. With only a few weeks in play to observe the object, the ISSI astronomers acknowledge its rarity (“We have never seen anything like ʻOumuamua in our solar system,” says Knight) while finding its movement explicable through natural means. All report anticipating results from the Large Synoptic Survey Satellite (LSST), which comes online in 2022 and may give us more interstellar objects of the same kind, allowing a deeper and perhaps less controversial analysis.

“In the next 10 years, we expect to begin seeing more objects like ‘Oumuamua. The LSST will be leaps and bounds beyond any other survey we have in terms of capability to find small interstellar visitors,” says Knight. “We may start seeing a new object every year. That’s when we’ll start to know whether ‘Oumuamua is weird, or common. If we find 10-20 of these things and ‘Oumuamua still looks unusual, we’ll have to reexamine our explanations.”