Life from a Passing Star

Remember ‘Nemesis’? The idea was that mass extinctions on Earth recur on a timescale of between 20 and 40 million years, and that this recurrence could be accounted for by the existence of a faint star in a highly elliptical orbit of the Sun. Put this object on a 26 million year orbit and it would, so the theory ran, destabilize Oort cloud comets, causing some to fall into the inner system at a rate matching the record of extinctions. Thus a cometary bombardment was to be expected on a regular basis, as were the mass extinctions that were its consequence.

No one has found Nemesis, though other theories about recurring mass extinctions are in play, including recent work from Lisa Randall and Matthew Reece that explores dark matter as the trigger, with the Sun periodically passing through a disk of the stuff. Of course, finding dark matter itself continues to be a problem. Moreover, the wide range in the proposed recurrences gives rise to the possibility that these events are not periodic at all but simply random.

Robert Zubrin now offers a paper arguing that random encounters between our Solar System and passing stars can account for the Oort Cloud disruptions leading to extinctions without the need for Nemesis. Appearing in the International Journal of Astrobiology, the paper weighs other discussions of periodicity and goes on to propose a model for calculating the frequency of these encounters. The model rides on the treatment of the galaxy as a gas, with stars as particles at a density of approximately 0.003 stars per cubic light year.

These stars, argues Zubrin, are clearly not in synchronized motion but have random velocities with respect to each other on the order of 10 kilometers per second. Much rides on the effective encounter distance — when do stars pass closely enough to disrupt the outer cometary shell? One encounter every 26 million years occurs in Zubrin’s calculations if the distance of effective encounter is taken to be 22,000 AU, which would send a passing star through the Sun’s Oort Cloud, while at the same time exposing the Sun to the cometary cloud around the passing star. 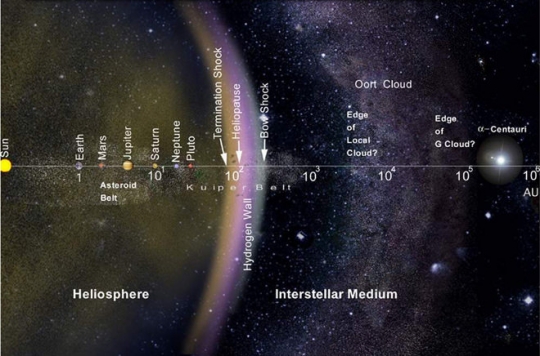 Image: The layout of the solar system, including the Oort Cloud, on a logarithmic scale. Credit: NASA.

We also have to take into account that the Sun is among the larger stars, the most common type of encounter being with far less massive M dwarfs. Zubrin assumes such stars have Oort Cloud analogs of their own, though we have as yet no observational evidence for this. He makes the case that comet bombardment of Earth will more likely occur from disrupted objects in the passing star’s Oort cloud than through objects native to the Sun’s Oort Cloud.

If the Sun were to travel through the alien star’s Oort Cloud at a range of 20,000 AU, it would probably be in the cloud for about that distance. Assuming a disruption range of 10 AU, it would sweep out a path with a volume of π(102) 20,000=6.3 million cubic AU. Assuming 4 Oort cloud objects per 1000 cubic AU, this implies that approximately 25,000 alien cloud objects could potentially be captured per pass, providing a significant chance of impact events to follow.

Indeed, disrupted Oort objects can in Zubrin’s calculations fall into their target stellar systems quickly, creating a cloud of short period comets and potential planet impacts while the other star is still relatively nearby. In the case where an M-dwarf passes through the Sun’s Oort Cloud while the Sun remains outside the smaller cloud of the dwarf, the dwarf star’s planetary system would be bombarded by objects from the Sun’s Oort Cloud while our own Solar System remained unaffected. By the calculations of this paper, while we might expect bombardments on the order of 30 million years or so in our system, our Oort Cloud would be delivering bombardments to a passing dwarf star every 7.5 million years.

Crucially, these events, transferring objects from one system to another, could happen fairly swiftly. If an object from an M-dwarf’s comet cloud were destabilized as it passed through our Solar System at a range of 10 AU, for example, it would have the possibility of reaching perihelion swiftly, in a matter of years. Note that Zubrin derives the figure of 10 AU for the distance a visiting star needs to come to an Oort Cloud object to turn it into a comet; i.e., the Sun can capture a visiting star’s Oort cloud objects if it passes within 10 AU of the object.

Here, then, is the hook for astrobiology:

If we estimate that each Oort Cloud object disrupted has an average mass of 1 billion tons, then an encounter [with a star] at 20,000 AU would appear to have the potential to import about 25 trillion tons of mass from another solar system into our own. Of course, only a tiny fraction if it would hit the Earth. But even so, the potential to transfer biological material is evident.

Most of these bombardments of our own system would occur from M-dwarf comet clouds, given the high percentage of M-dwarfs in the galaxy. The table below shows the distribution.

We have the prospect, then, of material from one stellar system impacting a planet in the other, or at least, being captured in that system’s Oort cloud and stored until another encounter with a passing star causes it to be disrupted and fall inward. Notice that Zubrin is talking about microbes in the transferred material that would have to survive a journey far less than the multiple light years assumed necessary for interstellar panspermia, though they would have to survive Oort-like conditions, having traveled from their inner system to the comet cloud.

It may also be noted that with a typical time between incoming encounters of 25 million years, it is probable that our Solar System has had about 140 incoming-delivery encounters with other stars since life first appeared on Earth some 3.6 billion years ago… If each encounter with a dwarf star typically releases 1000 solar system Oort cloud objects, then our Solar System has been responsible for releasing some 140,000 objects into others over this period. But, as a large G star, the sun probably delivered at least three times as many bombardments on other stellar systems as it received.

Our star keeps orbiting galactic center somewhere in the range of every 225 to 250 million years. A lot of material could be exchanged in this way:

…while we have only travelled through the Oort clouds of other, mostly dwarf, stars 140 times, dwarf stars have probably travelled through our own Oort Cloud about 420 times. If only 10% of encounters actually result in the transfer of microbial life from the Earth to another solar system, then we have been responsible for seeding 42 other solar systems with life. If each of these were then to act as a similar microbial transmitter, the result would be billions of inhabited worlds seeded by Earth.

Here it’s interesting to speculate, as Zubrin goes on to do, about whether there is an optimal impact rate for the evolution of advanced life. More frequent impacts might actually be a useful evolutionary driver — the author notes that the biosphere recovered from the K-T impact within 5 million years, offering up mammals and birds that proved long-term survivors. But too frequent an impact rate would not allow sufficient recovery time. Thus it is conceivable that areas of the galaxy with perhaps double our population of stars might be those more likely to feature advanced species and civilizations.

So we have no ‘Nemesis’ to fall back on — a cometary impact of roughly 1 every 25 million years has no specific driver within our own system, but results from the movement of stars, a random motion as the Sun moves through the Milky Way. Harvesting objects from passing stars, most of them red dwarfs, we collect them on timescales of years or decades rather than millions of years, the result of their relatively close disruption. We wind up with a mechanism for exchanging materials with other stellar systems that could have implications for life.

A key question: Can life survive Oort-like conditions to allow such transfers? We’re also hampered by our lack of knowledge about the Oort Cloud itself and, indeed, the local interstellar medium beyond the Kuiper Belt. Zubrin draws his best estimates from the current peer-reviewed papers, as he must, but it’s clear that to tighten this kind of argument, we’re going to need data from future explorations of the Oort. In such ways does a speculative astrobiology sharpen its focus, within a process of scientific inquiry that is by necessity multi-generational.

The paper is Zubrin, “Exchange of material between solar systems by random stellar encounters,” published online by the International Journal of Astrobiology 18 June 2019 (abstract).