A useful exercise for learning how to look for life elsewhere is to try to find it right here on Earth. Thus Carl Sagan’s observations of our planet via data taken during the 1993 flyby of the Galileo spacecraft, which was doing a gravity assist maneuver enroute to Jupiter. Sagan and team found pigments on the Earth’s surface with a sharply defined edge in the red part of the spectrum. What he was looking at was the reflection of light off vegetation. The ‘red edge’ has become well known in astrobiology circles and is considered a potential biosignature.

On Earth, vegetation is the most abundant reflecting surface indicating life (vegetation covers about 60% of present-day Earth’s land surface). The increase in reflectance shows up at about 700 nm, varying in strength depending upon the species of plant. But as Jack O’Malley-James and Lisa Kaltenegger (Cornell University/Carl Sagan Institute) point out, photosynthetic structures containing chlorophyll are found not just in vegetation but also in lichens, corals, algae and cyanobacteria.

This is helpful, because for anyone looking at the early Earth, the vegetation red edge would have been apparent only after the advent of land plants, while if we can detect a similar feature in other forms of photosynthetic life (call this a photosynthetic red edge, or PRE), we can extend the ability to detect such life back as far as 2 billion years and more (in the case of cyanobacteria). According to the scientists, lichen probably emerged at about the same time as algae, 1 billion years ago, while corals and modern vegetation begin to appear no earlier than 725 million years back.

This offers a much wider ‘window’ in which to observe red edge features on other worlds. The authors’ new paper in Astrophysical Journal Letters looks at what could produce a PRE spectrum aside from land vegetation and asks whether features like these would be detectable. Says Kaltenegger:

“If an alien had used color to observe if our Earth had life, that alien would see very different colors throughout our planet’s history – going back billions of years – when different life forms dominated Earth’s surface. Astronomers had concentrated only on vegetation before, but with a better color palette, researchers can now look beyond a half-billion years and up to 2.5 billion years back on Earth’s history to match like periods on exoplanets.” 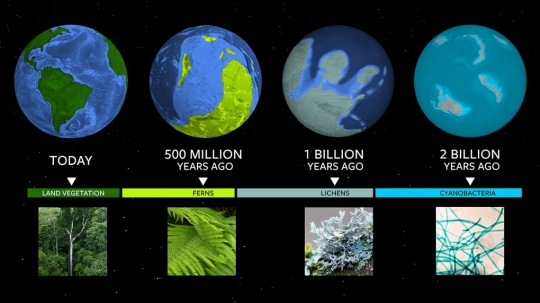 Image: To understand where exoplanets are in their own evolution, astronomers can use Earth’s biological milestones as a Rosetta stone. Credit: Wendy Kenigsberg/Cornell Brand Communications.

The paper models how a planet’s spectrum would change depending upon the dominant organism on the surface. O’Malley-James refers to the authors’ use of the early Earth in this analysis as a kind of Rosetta Stone, one that extends back halfway as far as the Earth itself. Examining the spectra of Earth-like planets modeled with four different organisms — cyanobacteria, algae, and lichen, as well as deciduous vegetation (lichen, for example, would have cast a sage to mint green color, a distinctive red-edge signature of photosynthesis), the authors show that the addition of an atmosphere and clouds to the model can mask individual features but still produce enough data to reach a broader conclusion: From the paper:

…for similar surface coverage the PRE signal of other organisms that could be dominant on the surface of an exoplanet can be similar in strength to the signal produced by modern vegetation for Earth in our models, which is approximated using deciduous tree reflectance producing an estimated reflectance increase of ∼4% (Table 1), falling within the lower end of the range of values (1%–10%) given for Earth’s VRE,,, Figure 1 shows that individually the different organisms can be distinguished with high spectral resolution. However, once we add a present-day Earth atmosphere as well as clouds to the model…, the individually distinguishing slope of the reflectivity of the organisms is no longer apparent. Thus a red edge detection, while not being specific to any one form of photosynthetic organism, can indicate a wider range of organisms than only vegetation. 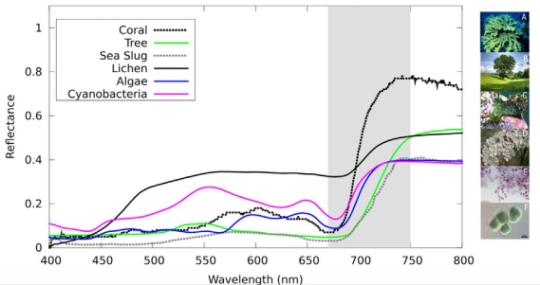 The red edge would be a difficult biosignature detection but not beyond the reach of high-precision instruments as we move to the next generation of observatories. It also provides another tool for biodetection that in combination with atmosphere analysis offers a multi-pronged approach to our remote probing for life, lessening the potential ambiguity of the results.