Yesterday I renewed our acquaintance with the idea that large natural objects can stand in for technologies we have previously been engineering into existence. The progression is a natural one. The early telescope work of Hans Lippershey and Galileo Galilei began with small instruments, but both refractor and later reflector designs would grow to enormous size, so that today, even with the best adaptive optics and segmented mirrors working together, we are pushing hard on what can be done. Not to mention the fact that controversies over land use can come into play with gigantic observatory installations, as we’ve seen recently in Hawaii.

The fascination is that there is nothing in physical law to preclude ever increasing segmented mirror instruments, but we have to question their economic realities and their practicality. I think it’s a nod to the sheer ingenuity involved in linking seemingly disparate phenomena that David Kipping could turn work on the ‘green flash’ seen at sunrise and sunset into, first, the realization that the refractive flash would be a globe-circling ring as seen from space when the Earth occulted the Sun, and second, into the idea that it marked a potentially usable lensing phenomenon.

Here we’re letting nature do the work. Using the Earth as a lens would allow us to extend our powers remarkably, and at comparatively low cost. Working with a one-meter detector of the sort we already know how to fly (Hubble uses a 2.4-meter mirror), we could achieve results we would expect from a 150-meter space telescope. Assuming, of course, that Kipping’s recent analysis is correct, or more accurately, that the issues he identifies in the paper are solvable and our imaging technologies are up to the task.

For we start digging into the challenging bits almost as soon as the concept is explained. What Kipping wants to exploit is the fact that light from a star behind the Earth would undergo refractive lensing as it entered and then exited the atmosphere. Crucially, the focal point this would create as light rays bent around the Earth and converged on the other side would vary in distance depending on the altitude in the atmosphere that the light passed. This would give us a focal line, so that as we moved further away from the Earth, we would be experiencing the lensing of light at higher and higher altitudes.

The Perils of Extinction

I hope by now the point is clear that because we are talking about light in the atmosphere, we have to be aware of all the extinction events — loss of light — that could occur, from low-level light being obscured by topographical features to much higher weather causing disruption in our seeing. Extinction is dependent on the color, or wavelength, of light in question, and we also have to take scattering effects into consideration.

But Kipping believes that light lensed from about 14 kilometers would be relatively free of these effects, allowing a robust image to be potentially acquired. The focal line sampled at roughly the distance of the Hill Sphere (about four times Earth-Moon distance) is thus what we’re after. Moreover, the alignment doesn’t have to be exact. It could be offset by about an Earth diameter.

Have a look at the figure below, drawn from Kipping’s paper, which shows the extinction expected at various distances from the Earth, and you’ll see that the most robust acquisition of signal is going to be at the Hill sphere distance. 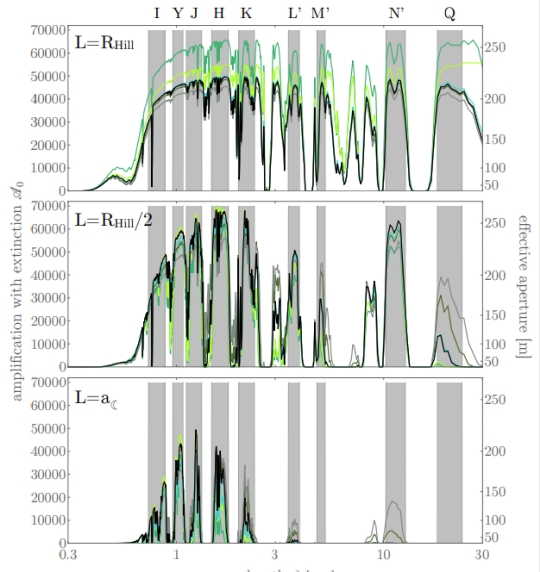 Image: This is Figure 11 from the paper. Caption: Amplification after extinction expected for a 1 metre diameter telescope at the Earth’s Hill radius (top), half the Hill radius (middle) and the Moon’s separation (bottom). Six atmosphere models are shown… [the color coding is provided in the paper, q.v.], which control temperature-pressure profiles (and thus refractivity profile) as well as the extinction computed using lowtran7 [a propagation model and computer code for predicting atmospheric transmittance and sky thermal and scattered radiance]. All models assume no clouds. Standard photometric filters highlighted in gray, except for L, M and N which are slightly offset to encompass the optimal regions. Credit: David Kipping.

As you see, these models assume no clouds, but we must take into effect the fact that at any given time, clouds cover approximately three-quarters of the Earth, meaning they can block out the desired signal. The Hill sphere distance is, in Kipping’s estimation, sufficient to bypass the bulk of these. His calculations show that light passing through the atmosphere at an altitude of 14 kilometers should display a net loss of about eight percent, small enough to make the concept of the Terrascope viable. 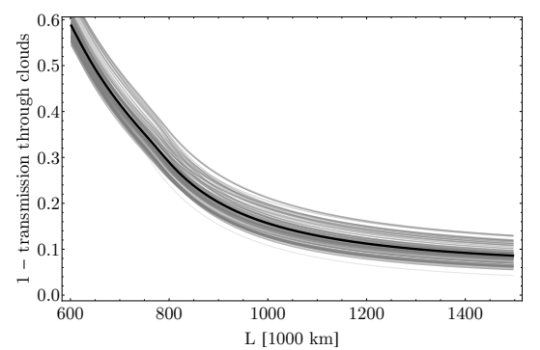 Image: This is Figure 13 from the paper. Estimated transmission through the Earth’s atmosphere due to clouds for a Terrascope detector at a distance L. At one Hill radius (1,500,000 km), lensed rays travel no deeper than 13.7 km and thus largely avoid clouds, thereby losing less than 10% of the lensed light. Credit: David Kipping.

Parts of the Earth which are illuminated are a problem, because they insert a background component to the desired signal. The author notes that “background suppression strategies, such as leveraging polarization, wavelength information, and temporal light curve variations” may be of value in reducing some of this loss, but he proceeds to account for the loss with a conservative halving of this original amplification figure to 22,500. An actual Terrascope may able to make this figure climb, though the paper does not explore the idea further.

On the matter of extinction and its problems due to clouds, it’s interesting to consider the Terrascope in other wavelengths. Kipping’s primary thrust here is in optical and infrared light, but the paper moves on to consider the interesting possibility of moving outside this range. From the paper:

Moving further out into the radio offers two major advantages… First, extinction due to clouds can be largely ignored, allowing for detectors much closer including on the lunar surface. Second, Solar scattering is far less problematic in the radio and indeed it is typical for radio telescopes to operate during daylight phases. The simple refraction model of this work was extended to the radio and indeed the amplification was estimated to be largely achromatic beyond a micron. Nevertheless, the model did not correctly account for the radio refractivity as a function of humidity, nor the impact of the ionosphere on lensed rays. Accordingly, a radio terrascope may be an excellent topic for further investigation.

A Path for Research

Limited by working with only those targets that are behind the Earth as seen from the spacecraft, we seem to be boxed in, but consider the possibility, which Kipping discusses in his video on the Terrascope, of creating a fleet of small detectors around the Hill sphere. Now the target list widens as we gain pointing control, and as we build out such a fleet, we can choose our early targets while anticipating the next high-priority items to be served by future detectors. The important first step is to find out whether a working Terrascope delivers on its promise.

Those with a long memory may recall my Centauri Dreams articles on Claudio Maccone’s FOCAL ideas in relation to creating not just a telescope but a radio bridge between distant targets for interstellar exploration [see, for example, The Gravitational Lens and Communications]. Could we do something similar to create a radio Terrascope? The paper gives a nod to the notion, and I asked Kipping if he could expand upon the idea, which he was kind enough to do yesterday.

“Any system like this can also be used in reverse, we can switch out the detector for a transmitter and suddenly we have an antenna with an amplification of 45,000 instead,” he wrote in an email. “In fact, it’s even easier because you don’t need an Earth-shade anymore. To realize this in the radio, there would need to be some further work on how the ionosphere affects the lensing but certainly the optical and infrared are already viable according to my study. One could imagine using this as the bedrock for an interplanetary high speed internet, enabling missions like Cassini and Juno to send back very high fidelity data.”

Given current limitations on data return from deep in the Solar System, the term ‘interplanetary high-speed internet’ seizes the imagination, which is why I’m going to make sure that Vinton Cerf, inventor of the TCP/IP protocols and a man who has done extensive work on extending these methods into forms adapted for Solar System distances, sees the Terrascope idea. Looking down the road, I can only imagine the effect on public support for robotic exploration of the outer system if we were able to offer high-speed data and virtual reality capabilities for our targets.

The benefit of exploring David Kipping’s ideas plays hand in glove with research into gravitational lensing. We’re talking in both cases about placing a detector at the right position to acquire data while minimizing background contamination, developing the needed occulter and creating the software to untangle what does get through from the lensed photons we want. But with the Terrascope, we are working close to home, and can experiment at relatively low cost with strategies for maximizing the acquisition of our imagery and the untangling of it. Much of this work would play directly into the development of the longer-term FOCAL mission.

We need to investigate these ideas. The collecting power of a 150-meter telescope, if it can be achieved as per this concept, takes us into the possibility of detecting topography on exoplanets, not to mention its potential for biosignatures as well as deep space astronomy. Moving further along will involve looking deeper into the question of atmospheric effects and occulter design, which is where Kipping believes the next research effort should be mounted.

The paper is Kipping, “The “Terrascope”: On the Possibility of Using the Earth as an Atmospheric Lens,” accepted at Proceedings of the Astronomical Society of the Pacific (abstract).