As we’ve been talking about the limitations of giant telescopes in recent days — and a possible solution in David Kipping’s idea of a ‘terrascope’ — it pays to keep in mind how our ability to collect light has changed over the years. Thus the figure below, which is drawn from a new paper from Daniel Apai and Tom Milster (both at the University of Arizona) and colleagues. Here we see four centuries of evolution for light-collecting power through refracting and reflecting telescopes, with the introduction of segmented mirrors making larger apertures possible. 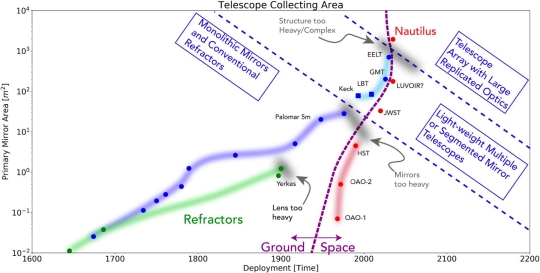 Image: This is Figure 1 from the paper (click to enlarge). Caption: Evolution of light-collecting area of ground-based (blue, green) and space-based (red) telescopes. The evolution is characterized by alternating stages of slow growth (when existing technology is scalable) and pauses (when existing technology cannot be scaled up). The data points represent the installation of the largest telescopes in their era and are connected to highlight general trends. Gray regions mark the approximate stages in the evolution when lenses, monolithic mirrors, and then segmented mirrors become to massive to be viable with existing technology. Telescopes used multiple different technological solutions to collect light. Large jumps in diameter are due to change in technology due to technological breakthroughs. Credit: Daniel Apai / Tom Milster / UA.

Anticipated designs for space telescopes take us from Hubble’s 2.4-meter mirror up to the segmented mirrors of the James Webb Space Telescope (6.5 meters) and future concepts like the Large UV/Optical/IR Surveyor (LUVOIR), with a 15-m primary telescope. The gradual growth of aperture sizes is, Apai and Milster argue in their paper, a bottleneck in the design of astronomical telescopes, and one we’ll have to overcome to study Earth-like planets and their potential biosignatures.

What the scientists are offering is a telescope concept in which the primary mirror is replaced by what the authors describe as multiorder diffractive engineered (MODE) material lens technology. Here we move from refraction, which involves light changing direction as it moves from one medium to another, to diffraction, where the waves of light change direction as they encounter barriers and openings in their path — think Fresnel lenses, where waves can interact constructively or destructively depending on wavelength. The MODE lens developed at UA by the authors is in effect a hybrid between refractive and diffractive lens technologies.

In their paper, Apai and Milster propose a space telescope called Nautilus, which would operate as a fleet of 35 14-meter wide spherical telescopes, each of them more powerful than the Hubble instrument. Within each Nautilus unit, an 8.5-meter diameter MODE lens would be used for high-precision transit spectroscopy, along with a 2.5 meter lens optimized for wide-field imaging and transit searches. The combined array would be powerful enough to characterize 1,000 exoplanets from a distance as far as 1,000 light years. The light-collecting power Nautilus achieves, by the authors’ calculations, is the equivalent of a 50-meter diameter telescope. 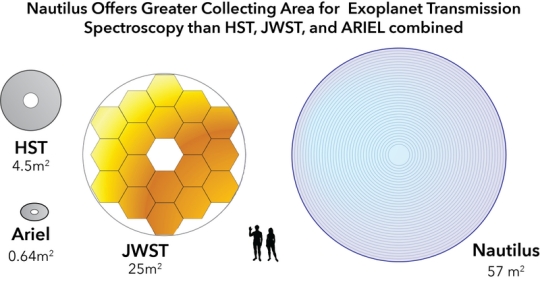 Image: Each individual Nautilus lens is 8.5 meters in diameter, larger than the mirrors of the Hubble Space Telescope and James Webb Space Telescope. Credit: Daniel Apai.

The authors argue that “…the concept described here offers a pathway to break away from the cost and risk growth curves defined currently by mirror technology and has the potential to enable very large and very lightweight, replicable technology for space telescopes.” Such lenses are less sensitive to misalignments and deformations than conventional refractive lenses and are readily replicated through processes of optical molding. Says Apai:

“Telescope mirrors collect light – the larger the surface, the more starlight they can catch. But no one can build a 50-meter mirror. So we came up with Nautilus, which relies on lenses, and instead of building an impossibly huge 50-meter mirror, we plan on building a whole bunch of identical smaller lenses to collect the same amount of light.”

These lenses work via a design the authors have patented, one that allows them to be both large and far lighter than monolithic mirrors. Large aperture lenses using diffractive methods can be produced without the mass and volume of material required by refractive designs. They are much thinner, formed around a series of separate sections mounted in a frame. The easiest analogy is with lighthouse lenses, which are built around concentric annular sections.

That makes them less expensive to launch, but the design also takes into account the practicalities of the space launch business, with the capability of stacking individual modules on top of each other. The lenses are 10 times lighter in areal density and 100 times less sensitive to misalignments. Thus the potential is here to sharply reduce launch costs as well as the cost of initial fabrication through a series of instruments using replicated components and identical telescopes — with a fleet of 35 in play, Nautilus collects light efficiently and distributes risk among multiple instruments. That latter point resonates given how much rides on a successful launch and deployment of missions like the James Webb Space Telescope.

“Currently, mirrors are expensive because it takes years to grind, polish, coat and test,” adds Apai. “Their weight also makes them expensive to launch. But our Nautilus technology starts with a mold, and often it takes just hours to make a lens. We also have more control over the process, so if we make a mistake, we don’t need to start all over again like you may need to with a mirror.”

Image: A labeled illustration of an individual Nautilus unit. It is designed to stack many units on top of each other in a rocket before inflating in space. Credit: Daniel Apai.

The paper takes note of the scalability of the concept:

If the Nautilus model works, the prospect of low-cost space telescopes far more powerful than anything now in space or planned for it opens up, bringing such capabilities to the level of individual universities, who could launch their own small instruments. That would be quite a switch from the current model of having to compete for time on overbooked space observatories like Hubble. And Nautilus itself gives us the potential for observing 1,000 Earth-like planets within the 1,000 light years the light-collecting power of Nautilus is designed to investigate.