Looking for Lurkers: A New Way to do SETI

SETI, the Search for Extraterrestrial Intelligence, has kept its focus on the stars, through examination of electromagnetic wavelengths from optical to radio signals. But Jim Benford has been advocating that we consider near-Earth objects as potential SETI targets, prompted by Ronald Bracewell’s thoughts in a 1960 paper advancing the ‘sentinel hypothesis.’ A Bracewell probe could linger in a target system for millions of years, monitoring developments on worlds with the potential for life. Couple that thought with the rarely studied co-orbital’ objects that approach the Earth both frequently and closely and you have a map for a realm of SETI that is only now coming into investigation.

What follows is a news release from The Astrophysical Journal covering Benford’s new paper, one we discussed on Centauri Dreams back in March [see A SETI Search of Earth’s Co-Orbitals]. I want to get this out now because Benford will be delivering the 2019 Eugene Shoemaker Memorial Lecture tomorrow, Thursday September 5, at 1900 MST (0100 UTC). The lecture, at Marston Exploration Theater in Tempe, AZ can be accessed online at https://asunow.asu.edu/asulive. For those not familiar with it, the Shoemaker Lecture has been set up by the BEYOND Center for Fundamental Concepts in Science as a special award to a leading scientist to honor the life and work of Eugene Shoemaker who, together with his wife Carolyn, pioneered research in the field of asteroid and comet impacts.

The most recently discovered group of rocky bodies nearby Earth are termed co-orbital objects. These may have been an attractive location for extraterrestrial intelligence (ETI) to locate a probe to observe Earth throughout our deep past. Co-orbital objects approach Earth very closely every year at distances much shorter than anything except the moon. They have the same orbital period as Earth. These near-Earth objects provide an ideal way to watch our world from a secure natural object. Co-orbitals provide resources an ETI might need: materials, constant solar energy, a firm anchor, concealment.

Co-orbitals have been little studied by astronomy and not at all by SETI or planetary radar observations. James Benford has proposed both passive and active observations of them as possible sites for ET probes that may be quite ancient.

A ‘Lurker’ is a hidden, unknown and unnoticed observing probe. They may respond to an intentional signal and may not, depending on unknown alien motivations. Lurkers would likely be robotic, like our own Voyager and New Horizons probes.

Long-lived robotic lurkers could have been sent to observe Earth long ago. As they would remain there after their energy supply runs out, this is extraterrestrial archaeology. If we find nothing there, this gives us a profound result: no one has come to look at the life of Earth, which has been evident in our atmosphere’s spectral lines over interstellar distances for over a billion years. 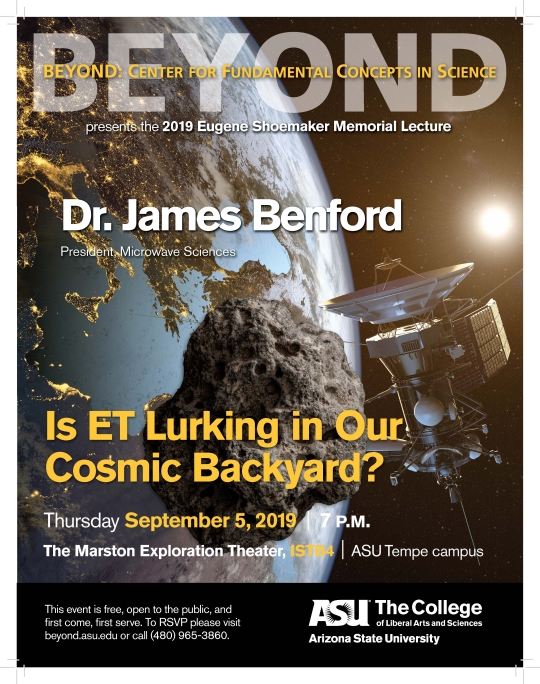 Co-orbitals are attractive targets for SETI searches because of their proximity. Benford thinks we should move forthrightly toward observing them, both in the electromagnetic spectrum of microwaves and light, and planetary radar. And we can visit them with probes. The most attractive target is ‘Earth’s Constant Companion‘ 2016 HO3, the smallest, closest, and most stable (known) quasi-satellite of Earth. Getting there from Earth orbit requires little rocket propulsion and can be done in short trips. China has announced they are going to send a probe to 2016 HO3.

The well-regarded astronomy journal of record, Astrophysical Journal, is publishing Benford’s paper “Looking for Lurkers: Co-orbiters as SETI Observables” in the near future.

This is the latest in an agenda Benford has carried out in imaginative searches for interstellar communication. His first work with other family members yielded the term ‘Benford Beacons’—short microwave bursts to attract attention, like lighthouses. Later he pointed out the uses of powerful electromagnetic beams to send light spacecraft, ‘sails’, in interplanetary exploration. His Lurkers proposal moves on to actual relic alien spacecraft that may have been nearby for longer than humans have existed.

Interstellar travel is challenging – no craft engineered by humans has yet traveled further than the outskirts of our own Solar System. One project working to change that is Breakthrough Starshot, which aims to send a gram-sized spacecraft to a nearby star system at around 20% of the speed of light. “Within the next few decades we hope humanity will become an interstellar species,” remarked Breakthrough Initiatives Chairman Dr. Pete Worden. “If intelligence arose elsewhere in our galaxy, it may well have sent out similar probes. It’s intriguing to think that some of these may already have reached our own Solar System.”

The paper is Benford, “Looking for Lurkers: Objects Co-orbital with Earth as SETI Observables,” soon to be published by the Astrophysical Journal (preprint). To attend Benford’s lecture at the University of Arizona online, the address is https://asunow.asu.edu/asulive.