What appears to be an interstellar comet is heading into the Solar System, with perihelion likely on December 10 of this year, a date that could change as orbital parameters continue to be firmed up. The natural comparison is with ‘Oumuamua, first discovered two years ago and now well on its way out of the system. But the object first labeled gb00234 and now carrying the provisional name C/2019 Q4 (Borisov), while clearly on a hyberbolic orbit, has been found before perihelion and should be visible for a much a longer period of observation and orbital calculation. 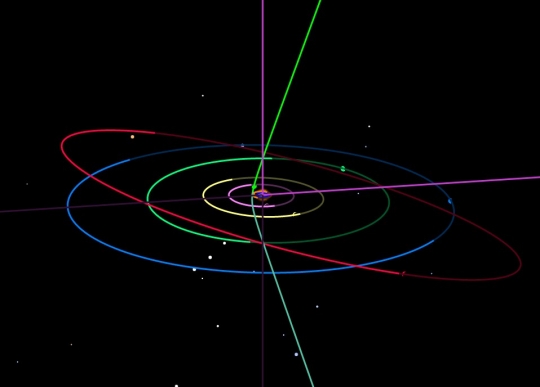 Image: Observations suggest that comet C/2019 Q4 (Borisov) may be from outside the Solar System. A hyperbolic solution for the object first labeled gb00234 passes between Mars and Jupiter. (Green=gb00234; Blue=Neptune). Credit: Tony873004 – Own work, CC BY-SA 4.0.

A professional optician and astronomer named Gennady Borisov at the Crimean Astrophysical Observatory (near the Crimean city of Bakhchysarai, on the Crimean peninsula) discovered the object on August 30, 2019 when it was at a distance of approximately 3 AU. This gentleman builds his own instruments, as physicist and radio astronomer Marshall Eubanks (VLBI) noted in a tweet this morning, replying to writer and journalist Corey Powell.

The Minor Planet Center (Smithsonian Astrophysical Observatory) now offers a Minor Planet Electronic Circular (MPEC) on C/2019 Q4 (Borisov) that notes the cometary nature of the object has been confirmed by ‘numerous observers.’ It also includes the news that the object will be visible for a good while. The appearance of the MPEC indicates sufficient data have been accumulated to make the call on the hyperbolic nature of the orbit.

Based on the available observations, the orbit solution for this object has converged to the hyperbolic elements shown below, which would indicate an interstellar origin. A number of other orbit computers have reached similar conclusions, initially D. Farnocchia (JPL), W. Gray, and D. Tholen (UoH). Further observations are clearly very desirable, as all currently-available observations have been obtained at small solar elongations and low elevations. Absent an unexpected fading or disintegration, this object should be observable for at least a year. 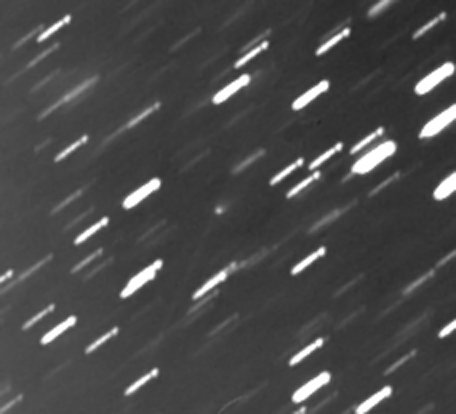 Image: C/2019 Q4 (Borisov), in the center of the image. Note what appears to be a short tail extending from the coma. Credit: Gennady Borisov.

What is striking here is the eccentricity, which at 3.08 (a figure worked out from 145 observations to this point) is clearly hyperbolic. Unlike ‘Oumuamua, we have a clear tail and a distinct coma, strengthening the object’s identification as a comet. Like ‘Oumuamua, its hyperbolic orbit is one that is unbound to the Sun, thus making this an interstellar object whose spectra will be examined with great interest. The object’s provisional designation will likely change, as did ‘Oumuamua’s, to something like object 2I/2019, making it the second in the category of interstellar objects, but clearly not the last as we tune up our methods.

Here's a remarkable animation of #gb00234, which may be our second known interstellar visitor, taken by astronomer Gennady Borisov – who discovered the object.

Based on the orbital solutions now in play, C/2019 Q4 (Borisov) should close to within about 1.8 AU of the Sun before beginning its exit from the Solar System, allowing observatories all over the world to study it. While ‘Oumuamua presented puzzles that are still being resolved, the cometary nature of this object is becoming established and we will have plenty of time to study it. Remember, too, that the Large Synoptic Survey Telescope (LSST) team anticipates first light in 2020. Its planned surveys are likely to turn up interstellar objects in large numbers.

Particular thanks to Jean Schneider (Observatoire de Paris) for early thoughts on C/2019 Q4 (Borisov), as well as numerous readers who checked in via email.

Next post: The Human Adventure is Just Beginning: Alien and Star Trek: The Motion Picture at 40