Congratulations to Gennady Borisov, the Crimean amateur who discovered the object now officially designated as 2I/Borisov (with a 0.65-metre telescope he built himself!). That ‘I’ in the designation points to the object’s interstellar origins, and picks up the nomenclature used with the first interstellar object in our system, 1I/‘Oumuamua. We’ve examined thousands of comets over the years but have found none with an orbit as hyperbolic as 2I/Borisov. That means that while the comet’s trajectory is being affected by the Sun, it’s not going to be captured by it.

What’s ahead: 2I/Borisov reaches perihelion on 7 December 2019, at which point it will be 2 astronomical units from the Sun and also 2 AU from Earth. It reaches its brightest levels in the southern sky in December and January and then heads back out toward the interstellar deep. So far, it appears that 2I/Borisov is a few kilometers in diameter, and we’ve also learned — via the Gran Telescopio Canarias (Canary Islands) — that its spectrum resembles typical cometary nuclei. The new interstellar visitor appears to be more straightforward than 1I/‘Oumuamua.

But considering that 1I/‘Oumuamua appeared a scant two years before 2I/Borisov, the inference is clear that such objects may be fairly numerous. Keep in mind that new instrumentation about to come online will expand our catalog, allowing us to investigate exoplanetary systems in ways beyond radial velocity and transits, through the spectra of objects within our own system. 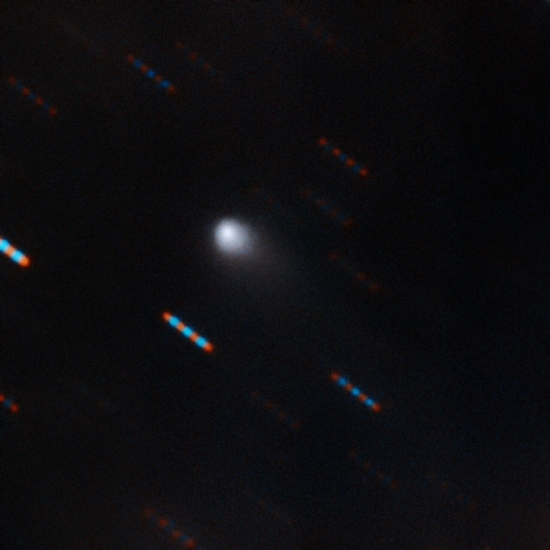 Image: A comet from beyond our Solar System, as imaged by the Gemini Observatory. The image of the newly discovered object, named 2I/Borisov, was obtained on the night of 9–10 September 2019 using the Gemini Multi-Object Spectrograph on the Gemini North Telescope on Hawaii’s Mauna Kea. Credit: Gemini Observatory/NSF/AURA.

There is little doubt about 2I/Borisov’s cometary nature, given that observations have shown a condensed coma and a short tail. The IAU’s decision to give it a designation as an interstellar object follows the computation of its orbit by the IAU Minor Planet Center, with confirmation of the hyperbolic orbit from JPL’s Solar System Dynamics Group. Now we wait to learn how often to expect such objects and how much information we will be able to tease out of them.