In Search of a Wormhole

A star called S2 is intriguingly placed, orbiting around the supermassive black hole thought to be at Sgr A*, the bright, compact radio source at the center of the Milky Way. S2 has an orbital period of a little over 16 years and a semi-major axis in the neighborhood of 970 AU. Its elliptical orbit takes it no closer than 120 AU, but the star is close enough to Sgr A* that continued observations may tell us whether or not a black hole is really there. A new paper in Physical Review D now takes us one step further: Is it possible that the center of our galaxy contains a wormhole?

By now the idea of a wormhole that connects different spacetimes has passed into common parlance, thanks to science fiction stories and films like Interstellar. We have no evidence that a wormhole exists at galactic center at all, much less one that might be traversable, though the idea that it might be possible to pass between spacetimes using one of these is too tempting to ignore, at least on a theoretical level. At the University at Buffalo, Dejan Stojkovic, working with De-Chang Dai (Yangzhou University, China and Case Western Reserve University), thinks the star S2’s behavior may offer a way to look for wormholes. 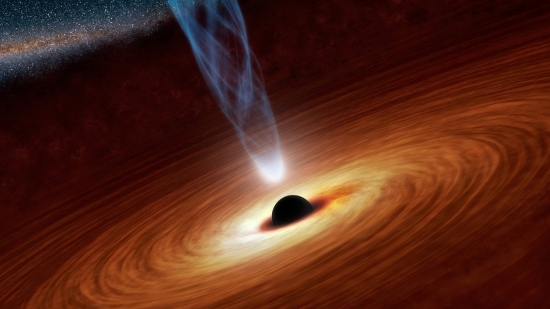 Note that the authors are not saying they find such an object in the existing datasets on S2 (the object has only been monitored since 1995 at UCLA and at the Max Planck Institute for Extraterrestrial Physics). Rather, they’re arguing for using the behavior of objects near black holes, where extreme astrophysical conditions exist, to see whether they exhibit unusual behavior that could be the result of a wormhole associated with the black hole. So this is a methodological approach that advances a proposed course of observation.

You may remember that a 1995 paper from John Cramer, Robert Forward, Gregory Benford and other authors including Geoff Landis (see below) went to work on this question, though not using a star near the Milky Way’s center (see How to Find a Wormhole, a Centauri Dreams article from the same year). Cramer et al. argued for looking for an astrophysical signal of negative mass, which would be needed to keep a wormhole mouth open. Let me quote from something Geoff Landis told me about the paper:

That’s an astrophysical signature interesting enough to be noted. And from the paper itself:

“…the negative gravitational lensing presented here, if observed, would provide distinctive and unambiguous evidence for the existence of a foreground object of negative mass.”

Back to Stojkovic, whose new paper notes a property we would expect to exist in wormholes. Let me quote his paper on this:

The purpose of this work…is to establish a clear link between wormholes and astrophysical observations. By definition, a wormhole smoothly connects two different spacetimes. If the wormhole is traversable, then the flux (scalar, electromagnetic, or gravitational) can be conserved only in the totality of these two spaces, not individually in each separate space.

The message is clear. Again, from the Stojkovic paper:

As a direct consequence, trajectories of objects propagating in [the] vicinity of a wormhole must be affected by the distribution of masses/charges in the space on the other side of the wormhole. Since wormholes in nature are expected to exist only in extreme conditions, e.g. around black holes, the most promising systems to look for them are either large black holes in the centers of galaxies, or binary black hole systems.

By now it should be clear why S2 is an interesting star for this purpose. Its proper motion orbiting what is believed to be a supermassive black hole at Sgr A* could theoretically tell us whether the black hole harbors a wormhole. The extreme gravitational conditions make this the best place to look for a wormhole, and minute deviations in the expected orbit of S2 could indicate one’s presence. That means we need to assemble a lot more data about S2.

Stojkovic doesn’t expect to find a lot of traffic coming through any wormhole we do find:

“Even if a wormhole is traversable, people and spaceships most likely aren’t going to be passing through. Realistically, you would need a source of negative energy to keep the wormhole open, and we don’t know how to do that. To create a huge wormhole that’s stable, you need some magic.”

In the absence of magic, we can still put observational astronomy to work. We may be a decade or two away from being able to track S2 this closely, and in any case will need a lot more data to make the call, but the scientist cautions that even deviations in its expected orbit won’t be iron-clad proof of a wormhole. They’ll simply make it a possibility, leading us to ask what other causes on our own side of the presumed wormhole could be creating the perturbations. And any wormhole we do come to believe is there would not necessarily be traversable, but if the effects of gravity from a different spacetime are in play, that’s certainly something we’ll want to study as we untangle the complicated situation at galactic center.